A Mushroom in a Bag of Apples 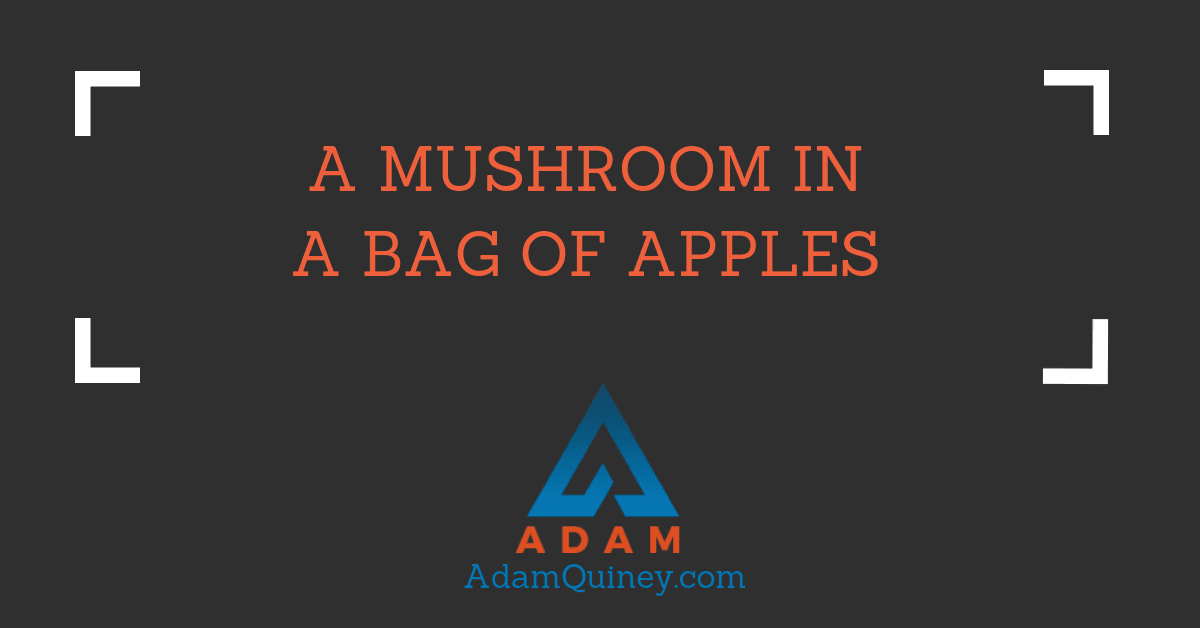 You’re getting supported with your leadership. Being given feedback in the moment and invited to step into something that is uncomfortable.

The conversation about getting better is your ego’s defense.

It’s raised to prove that you don’t suck right now, and whatever is being asked from you is fine, but you need to point out that you’re no slouch.

People can say they want more vulnerability, strength, courage, action, leadership, compassion, or anything else from you, and you can let them know “Hey, I want you to know, I’m getting way better!”

And you might even be right. But who cares?

I’m not suggesting that acknowledging the ground you’ve taken isn’t important. I’m inviting you to consider that acknowledging how you’re better than you used to be is a weird thing to bring into a conversation about what’s next for you.

Weird meaning that it doesn’t fit, like if I was looking through a bag of apples and I noticed a mushroom.

That would be weird.

Mushrooms aren’t bad. They’re delicious (provided you cook them). It’s important to eat things like mushrooms sometimes — they’re very rich in minerals and have a delicious fleshy texture that can be an incredible complement or substitute to meat. Have you ever had sautéed mushrooms alongside a steak? Are you kidding me? Do you need any further proof that god exists? I submit that you do not.

However, notwithstanding that mushrooms are good, delicious, important for us and evidence of a divine power greater than ourselves, it would still be weird to find one amidst a bag of apples.

And that’s why it’s weird when you bring up what you’ve accomplished in the past when we’re talking about what’s next. It simply doesn’t fit.

Something being weird doesn’t mean it’s wrong. It just means it’s a distraction. Instead of making it wrong, we might get curious about it. What has you bringing that particular conversation forward, now? Are you feeling small? Scared? Are you feeling like your progress isn’t being acknowledged enough?

Nothing wrong with any of those.

In the leadership conversation, we invite you to distinguish why you’ve brought this mushroom forward, and then invite you to take on getting those needs met outside of the conversation. I’m not saying that it’s wrong for you to need acknowledgment for the growth you’ve taken on. I’m pointing to the fact that it’s a mushroom — it’s out of place and it distracts from the conversation that we’re here to have in the moment.

We get precious about our mushrooms. They’re uniquely ours, and we make up stories and strategies about why they’re important to us and how they help us.

But leadership isn’t a game about bolstering up the scaffolding you already have in place and navigating around that. It’s about getting you clean, clear and powerful as the conduit for your message. The impact your mushrooms have are weird. Not weird wrong. Just weird distracting.