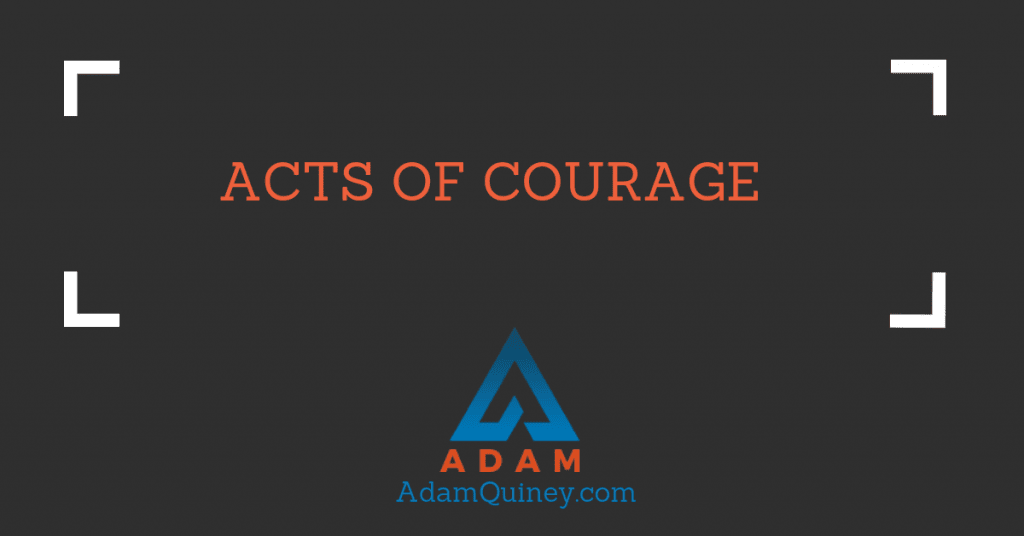 I wrote a headline yesterday that said “Refusing to care what other people think is not an act of courage.” I closed Facebook and left the house so I wouldn’t have time to overthink or edit it, but it sat in the back of my mind and didn’t feel good. I didn’t like the post because it felt too arbitrary and too “right”. Also, I didn’t think it really was right.

Anyhow, here are some other thoughts on that topic:

For the longest time, I was really good at not caring what other people thought of me. I set aside their beliefs and opinions about me, and marched proudly into the world, untouched by their judgments, biases and other thoughts about me. It helped me get things done when I was a project manager, and it allowed me to be an effective lawyer. It’s hard to vigorously defend your client when you’re worried that someone is going to think less of you for doing so. That’s actually a disservice to your client, and so your job really is to set aside all of your feelings about how you might be perceived, and instead, stand purely and solely for your client.

There came a point though, when I wanted something beyond the experience of life that I was getting through this way of showing up. I felt empty. I had a lot of the trappings of success, but I felt lonely, when I allowed myself to feel anything at all.

I felt isolated, which isn’t surprising, because that’s ultimately what I was doing. If I refuse to let anyone’s thoughts about me in, I’m sealing myself off from them. I am an island.

I thought I was being courageous, because I would shut down all empathy and connection with other humans, and that would then allow me to take on things that other people found frightening (because they were worried about looking stupid, foolish, lame, etc.).

So on the outside, it may have looked courageous. But actually, I was just staying safe. As long as I don’t have to care about what the rest of the world says or thinks about me, I don’t really have to be responsible for my actions. It’s not my fault you feel that way, that’s entirely on you to work out.

I’ve done a lot of work since then (of course, so have we all…). And what I can see is that wasn’t me being courageous. It was me being fearful, and then justifying my reaction from my fear. It was my ego telling me I was being bold and brave and daring, while continuing to bundle me up and package me away from what I was afraid of (other people’s opinions of me).

Rather than a practice that was expansive, I found these kind of choices led to me contracting from what life put in front of me. You could say that I was “showing up” in more of life than ever before, but it was like showing up wearing a full suit of plate mail.

Somewhere along the line, I realized that courageous, for me, was being willing to really feel how other people felt. Not just how they felt about me, but really, in the broadest and deepest sense, how they felt. A willingness on my part to feel how people around me felt, period.

The scary part about that, is that it includes how they feel about me.

And so these days, I find that it requires a lot more courage to let myself feel what you, and everyone else, feel, including how you feel about me.

And then to not let that stop me from doing what I’m committed to.

If I were to re-write that quote, I would say: “I’ve found it takes less courage to refuse to care about what people think than it does to consider what people think, and still act in alignment with my commitment.”

P.S. Not caring what people think is often a stepping stone towards the next step. There’s nothing wrong, or even un-evolved, about being an island.