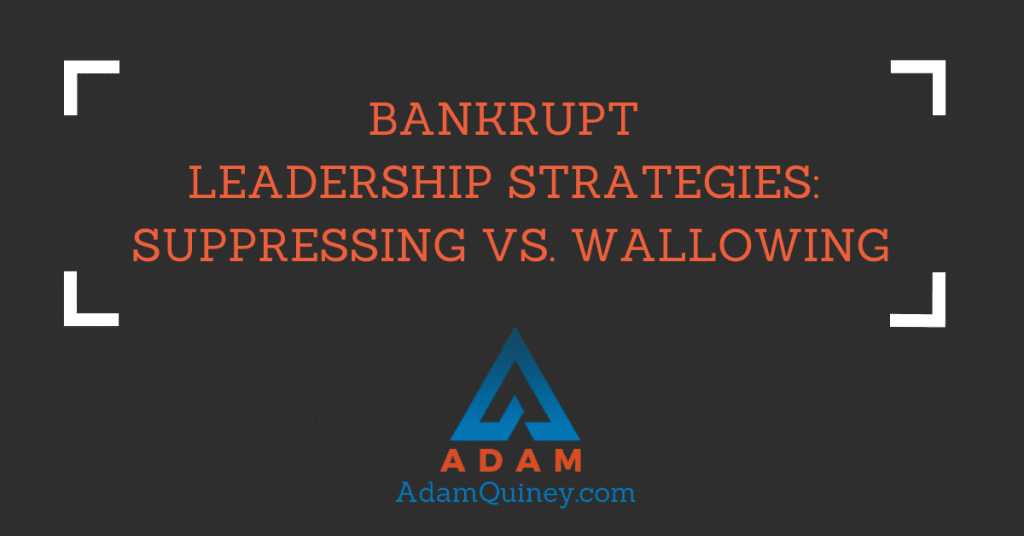 There are two main approaches to avoiding being with in your life.

In fact, both of these approaches to avoiding being with are two different sides of the same coin. We’ll use the inability to be with anger as an example to illustrate each of these two sides.

On the suppression side, we have Reggie. Reggie has stories that “Anger just isn’t productive. And it’s harmful. I choose not to be angry.” When someone around Reggie gets angry, Reggie energetically closes to them. He might attempt to placate them, but on another level, he retreats up into the safety of his head and rational analysis. He might flatly respond to this person, explaining why their anger doesn’t make sense, and attempting to use logic to allow the person in front of them to escape their anger the same way Reggie does.

When Reggie himself gets angry, he heads it off at the pass. Rather than feel his own anger, he thinks about it. He analyzes and rationalizes his anger, effectively disconnecting from his feelings, and once again, retreating into his own head. The experience people have around Reggie when he is angry is a little like being around a cold, ruthless sociopath. They can tell, on some level, that he’s upset, but he remains flat, cool and collected.

On the wallowing and reacting side, we have Betty. Betty also has stories that “Anger is harmful. It’s wrong. We shouldn’t be angry to people, we should be nice to them.” (To be clear, you can have a million different stories and beliefs that would lead to developing an atrophied ability to be with something). When someone around Betty gets angry, she takes it personally. Someone else’s anger is not simply someone being angry. It is a meaningful expression about who Betty is as a human being.

Betty spins on the other person’s anger. She thinks about it, worries about it, asks herself if there is something wrong with her. Betty herself may get angry back at this person, furious that they would direct anger towards her. Betty may start posting on social media that people shouldn’t get angry for no reason, and create a group for people dedicated to bringing cheer into the world, rather than anger.

When Betty herself gets angry, she is swept up in it. She has little ability to discern that her anger is about herself, and instead, feels righteous and indignant about the person, event or circumstance that drove up this anger. Betty may even experience boldness and empowerment from the fervour provided by her anger.

Both Reggie and Betty lack an ability to simply be with anger, without having it move them off the natural, full-expression of themselves. Reggie was not born a robot, and Betty was not born righteous and dramatic — they both simply learned to show up these ways, in the face of what they cannot be with, as a function of their shadows.

For Reggie, practising being with anger would involve allowing himself to feel and experience his own anger, without doing anything with it. And, when present to someone else’s anger, to stay open, connected and present, rather than retreating into the comfort and safety of cold, hard logic.

For Betty, practising being with anger would involve allowing herself to feel and experience her own anger, without doing anything with it. Rather than acting on her anger, or making it meaningful, Betty’s job might be simply to acknowledge “I’m angry”, and then sit in that, separating her anger from all of the meaning she subsequently attaches to it. And, when present to someone else’s anger, rather than reacting to it, staying open, connected and present with the human being in front of her.

It’s important to note here that neither what Reggie nor Betty does is wrong, bad, or “should” be changed. This is not about condemning patterns of behaviour and insisting you make changes because what you are doing is wrong.

The point is that for both Reggie and Betty, there are aspects of their leadership that will remain forever out of their reach because of their inability to be with anger. Their reactivity to this particular stimulus ensures that they will be operating “on rails” as soon as it shows up. Reggie, through the cold, hard world of analysis (leaving people feeling ungotten and unheard) and Betty, through the righteous indignation and dramatic angst of making things overly-meaningful (leaving people swept up into her tornado).