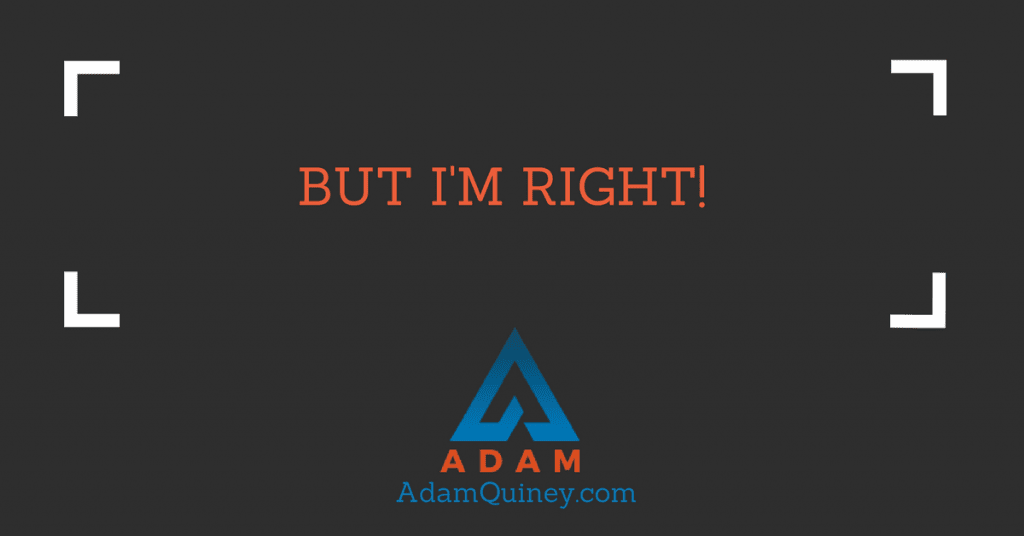 We met for breakfast. I liked his ambition, the game he was playing, and his courage. In a lot of ways he was fearless.

I liked him because he reminded me of me in some ways. Maybe a lot of ways. I loved how funny he was. I liked that sometimes his humour was dry, and other times it was way out there, wet and wild.

Most of all, I liked how big his heart was, even if he didn’t see that.

Our conversation was safe, for the most part. We explored various aspects of what we’re each doing, but didn’t veer too far from the beaten path.

Suddenly I had some skin in the game. This was in my house. We weren’t just tracking mud around in some random person’s house — we were tracking mud on my floor.

It wasn’t a conversation any more. It was a battle.

I could feel the tension. My energy was up. On some level, I could tell I wanted to be right, but it wasn’t distinguished. I wasn’t able to own that fact.

It was actually worse than that though: I had already decided that I was right.

There wasn’t any space left for his opinion, because mine was the right one. In service of that righteousness, I took us on a trajectory that was messy. Intimate too, but messy. Uncomfortable. Kind of gross and icky.

And as soon as I became attached to being right, I created the space for someone else to be wrong. Now there was no space for anything but me being right about what I was right about. Anything else became either a threat to my being right, or something inconsequential to bat aside and ignore.

As I walked home, I could still feel my energy buzzing away. I put on a podcast to focus on, but stopped myself.

“No. Sit with this discomfort. Allow this energy. Be with what you’ve created”.

And then I realized how much I had wanted to be right. How important I had thought it was for both of us that I be right about my point.

And as I let all of that slide away from me — as I let myself let go of it mattering whether or not I was right, or even whether it was possible to be right about something like this — my peace came back to me.

I breathed deeply into the discomfort.

And then I realized that I had shifted my game beyond simply playing to be right.