Can’t We Just Let This Slide? 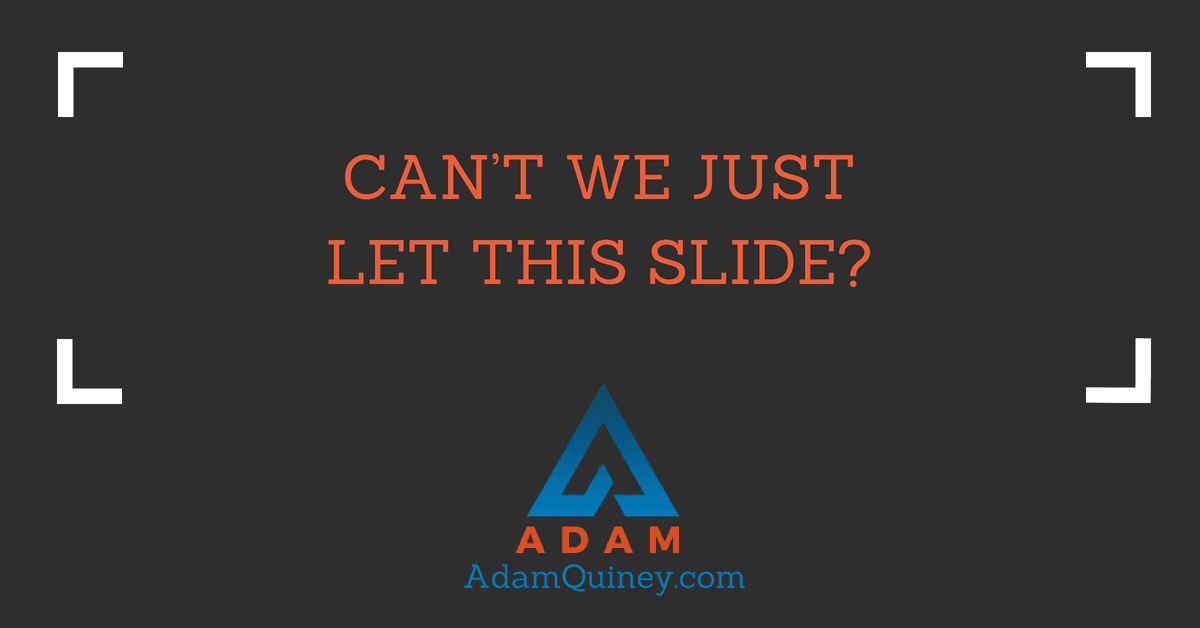 You don’t really understand what your leader’s problem is. It seems like they’ve got a bug up their ass. They certainly have something up there, and you’d rather they just get it sorted out than take it out on you.
Because that’s what it feels like. It feels like someone is picking on you — like they’ve specifically got you targeted in their sights.
You don’t understand why they’re nitpicking over all of these small details. This doesn’t really matter. It’s not a huge deal. Yah, you were late. Yah, you need to leave a little earlier than you committed to staying.
But these are small things right? What difference does it really make in the long run if you need to step out a few minutes early? Your leader talks about developing your leadership, and how this relates to that, but you don’t see it that way. You see it like this person is being nitpicky, draconian and overbearing.
They should just get over this and focus on the things that really matter — the big stuff. Someone leaving a meeting a few minutes early isn’t worth spending time on.
You know that things would be a lot smoother if we just stopped drawing attention to this stuff. Look, everyone does this right? We all speed a little bit on the highway, we all fudge our numbers a little bit. It’s just the way it is.
Your leader isn’t developing leadership. They’re acting out they’re perfectionism on you.
You haven’t said much about this — you’ve just gone along with it. Done your best to play the “perfect game”, and then silently resented your leader when they do catch you for something you’ve let slide.
But one day, you bring this to them. You let them know the impact of how they’re showing up. How it feels draconian, and overbearing, and frankly, stupid. Why are they wasting time on this silly stuff when you have big projects to get done. Things to create in the world.
They take your feedback gracefully. Much more so than you expected. In fact, they thank you for it, and honour your willingness to speak your truth. They promise you that they’ll bring this to their own leader and see what there is for them to take on.
Then, they ask you if you’re open to a conversation in service of your leadership.
You get nervous, but say “Yes” anyway. (Why else are you here?)
They invite you to consider the impact on the team, every time you show up late and it goes unmentioned.
“If we take all of the judgment and blame away from it, what do you think people might think when they notice someone showing up late?”
It’s hard for your to separate the judgment and blame, but when you do, you concede that you could see how it might leave other people feeling like it’s okay to be late. Like it doesn’t matter when we show up. Maybe even like you’re better than them, or like their time isn’t important to you.
“Right. Yah, I get that too. And what do you think the impact of them feeling that way might be?”
You can see that it might breed some resentment. Or some righteousness. It would certainly be a little toxic for the dynamic on the team.
You start to defend how this isn’t your intention, but your leader cuts you off, “I get it, I really do. And I trust you here — you’re not intending this, which is why I’m sharing it with you. So you can get present to the impact, and choose it a little more consciously”
They smile at you with understanding, “Look, it would be easier for me to ignore this stuff. I don’t like coming across like a jerk. And I know that everyone else would prefer that I just let it slide. So really, there’s only one reason left for me to stand for any of this, and that is because you asked me to when you told me you wanted to develop yourself as a leader.”
“That’s the only reason I’m doing this,” they pause at this, and look meaningfully at you, “but I don’t have to. Do you want me to continue supporting you in developing as a leader?”
You feel like you should be taking copious notes so you can figure out how they did this leadership aikido on you. Instead, you take in a deep breath, and then let it out.
“Yes, please.”
They smile and in that moment you notice how much love there is in their eyes.