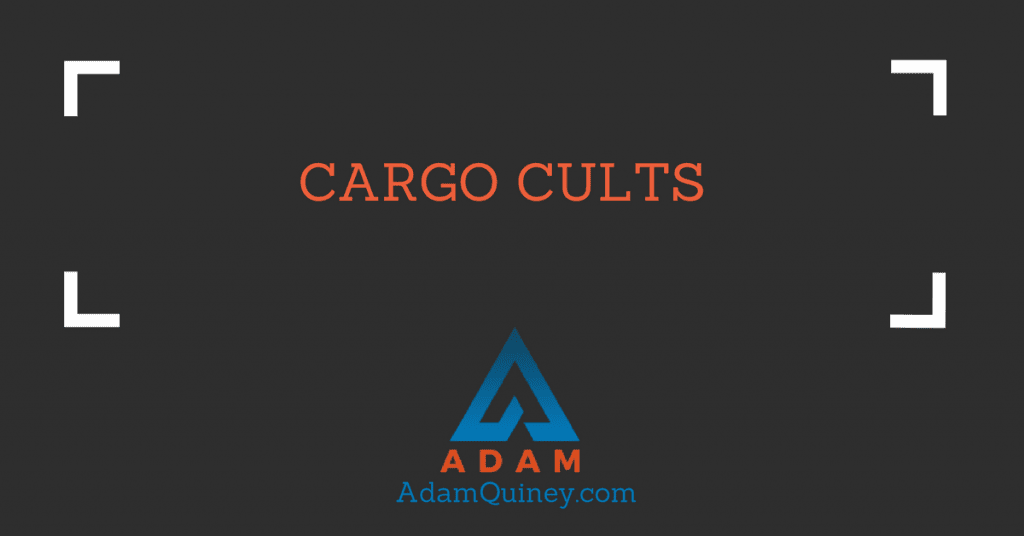 Although it is slowly being replaced with new theories, there is a fascinating sociological occurrence relating to the indigenous peoples of Malenesia. It is known as Cargo Cult. You can read in depth about the movement at that Wikipedia link, but let me provide the important part for this conversation:

The Pacific islanders were dramatically impacted as a result of the Pacific theatre of conflict during the Second World War.

Throughout the war, the United States and Japan, would install air-strips and accompanying military installations in various islands in the Pacific, using these as a homebase and staging areas for the battles that ensued. The developed nation would use the island as a depot, bringing in airplanes to airdrop supplies and cargo.

Something interesting started to develop after the war ended. The indigenous peoples adopted the outfits, structures and gestures of the departed military personnel.

In spite of the fact that there were no airplanes coming, indigenous people would stand on the airstrips and make the same gestures that had been used before when an approaching plane was arriving overhead.

At the time, the theory that was developed was this:

The indigenous people had noticed that the military personnel were able to bring in a wealth of possessions (cargo). They too, wanted their own cargo, so they started to study the military men.

The indigenous people saw what they wore, saw how they created airstrips and other buildings that seemed significant, and noted the hand gestures that the military personnel used which seemed to bring airplanes in.

The thinking of the Pacific Islanders was sound: they had watched the military personnel at work, studied their movements, clothing and structures, and if they could replicate them, they ought to receive the same bounty.

The flaw lies in the fact that they did not see the entire picture. They saw only the result of the massive military-industrial machine that lay behind the personnel’s activities. They were unaware of the manufacturing process that went on, en masse, in the States and Japan, to produce and provide all of the cargo being delivered. They were unaware of all the training and systems put in place that allowed for the delivery of all that cargo.

And so they were left, mimicking the doing, but without creating any of the results.

The islanders made a common mistake: They confused the symptoms of the manufacturing process (complicated drills, routines and gestures, structures that enable the use of modern machinery, and most importantly, the delivery of products) with the causes.

None of what the Islanders witnessed the causes. It was all just symptoms of a larger system underneath.

YOU ARE DOING THIS TOO.

Everything in our world is set up around this basis.

Let’s start with the high-level perspective, and them look at how this shows up in a few examples.

Here are some common ways we see this paradigm at play:

This list is endless. Let’s look at each of those particular examples:

In item 1, the question is ultimately “What is the doing that our leadership team needs in order to generate an increase in profits?”.

In item 2, the article headline is suggesting that if you carry out (ie, DO) these ten tips, you’ll receive a larger raise.

This problem is prevalent in the consulting industry. CEOs and executives achieve success in their endeavours, and then write a book espousing how, and open up shop in training people to follow their same process.

The problem is that their success, and the steps they took are SYMPTOMS of how they were being, just like the results that they generated. It all arises from the underlying way of being.

That doesn’t stop us from trying though.

In fact, we push as hard as we can to replicate the doing of success.

99.9% of human beings are locked in a desperate struggle to find the right piece of doing that is going to make a difference. And when that particular thing didn’t work out, we go out in search of something new and better.

The problem is that it’s like trying to find the right gesture, piece of clothing, or military building that will bring cargo to your island.

You’re replicating the symptoms instead of taking on the underlying cause.

If you want to create real leadership, results, success, happiness, or any other particular result, you must address your being.