Changing the Rules of the Game 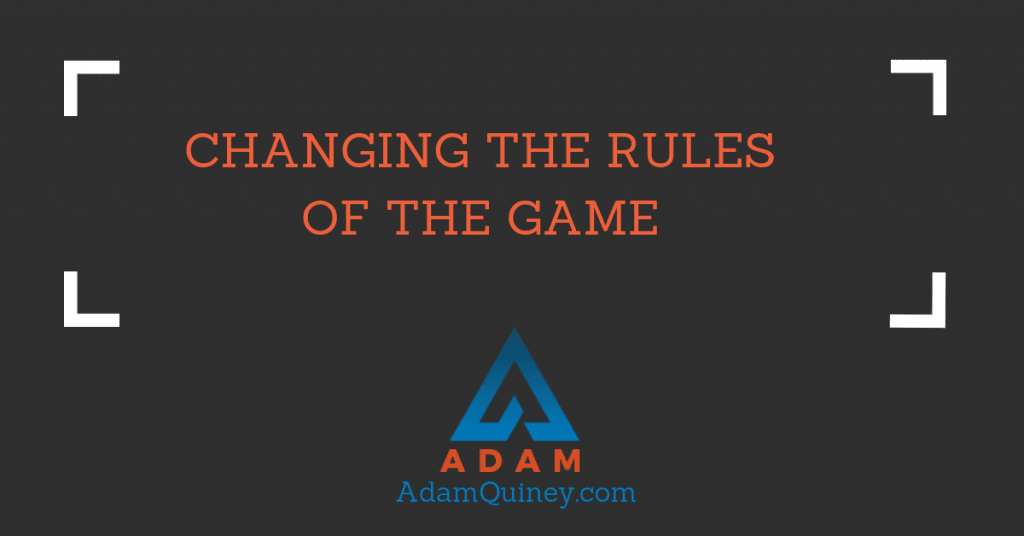 You were in a conversation with Roshinjer about what he was up to next.

Roshinjer always had a million cool ideas, but lately, he’d been executing on them. Something had shifted in him, and whatever it was, he’d gone from being the kind of person that had “neat”, fanciful ideas about what was possible, to actually creating them in the world.

You were a little upset actually.

Roshinjer had given his notice and was moving on from his job, and he’d always been your buddy at work. The two of you would spend your time complaining about the jobs you had, how it didn’t work, and scheming about what you would each do, “one day”.

But now Roshinjer was leaving, and you felt like you were stuck here. Listening to him talk created a sense of excitement and possibility, but also frustration and fear. Why does he get to do these things, and you don’t?

“What was it that had shifted for him?” you wondered, as he spoke.

Roshi had a number of projects on the go and they all sounded exciting. Crazy too. Like, how could he hope to bet on these things — they just seemed so … out there.

You asked Roshi about that, and he acknowledged how scary it was for him too. At this, you breathed a sigh of relief, finally, you were going to get to talk like the good old days; talk about how it was scary, and probably wouldn’t work, and find your way back to spending just a few more years at this dead-end job.

But Roshi didn’t join you in that conversation. He acknowledged how scary it was, and how there was no guarantee, and that that was how he knew he was on the right path. He shared with you, with a quiver in his voice, how frightening all of this was, but also how thrilling.

And then he asked you to join him.

“Look, this next project I’m taking on, it’s kind of crazy, and a big one, and I’m going to need some help. You and I have been talking about making the leap for years — it’s time, come do it with me!”

At that, you felt a jump in your stomach. The thought of working with Roshi on some crazy project sounded incredibly exciting — like what you’d always dreamed of doing. You couldn’t help but smile at the thought of doing something as wild and freeing as that.

But very quickly after the excitement showed up, your practicality intervened on your behalf. You wanted to do this, you were sure of it, but you needed more runway. More safety, more time to prepare, more money in the bank, more certainty.

You processed this quickly and efficiently, before giving a nod to your thinking.

“Roshi, I want to do this, and it sounds really cool. But, look, there isn’t any guarantee right? And what if things don’t work out? I have a family I have to think about. Let me join you on the next project — I just need some time to get my affairs in order. To save up more, and to make sure I can do this right”.

The look on Roshinjer’s face was devastating. His eyes looked at you with so much love, but also heartbreak.

You spoke quickly to make him feel better. “Don’t worry Roshi! I’ll definitely join you on the next project, so you don’t need to feel sad that I’m a no to this one. I’m really going to do this with you.”

Rather than alleviating the look on his face, your words deepened it. Ugh, he felt so loving, it was hard to be with.

He drew a deep breath and paused thoughtfully, then looked back at you. Those eyes…

“I understand. I want you to know, I’m not sad because you won’t be joining me. I’m sad because one of the rules you’re playing in your life is that you’re not yet ready. That you’ll do things, one day, once you’re ready, but not today. And the second rule, is that, since you’re not currently ready, you need to prepare yourself so that you can get ready.”

He pauses before saying more.

“I was playing by those same rules. I had a million ideas, but I was never ready to execute on any of them. Never willing to make a bet. And then, one day, someone helped me to really see how I was playing.”

“They pointed out that I would never get to live the life I wanted — a life of of leaning into the unpredictable and the unknown — by playing in safety and certainty. And then they invited me to play a different game.”

You nodded, but also felt all of your objections and pragmatism piling up in your brain behind his words.

He looked at you, and laughed lovingly, “Yes! I had those same objections show up in my head too!”

You were a little irritated that he had read you so well, but also felt seen in a moment. You relaxed, ever so slightly, before Roshinjer spoke again.

You reassured him, “Roshi, don’t worry, I’m definitely going to do the next thing with you, I just need a little more time to get everything sorted. And I’ll get to see you at your going away party, right?”

He smiled and looked at you. Again, with that awful combination of love and sadness.

“Yeah, you’ll definitely see me there. I’m looking forward to it.”