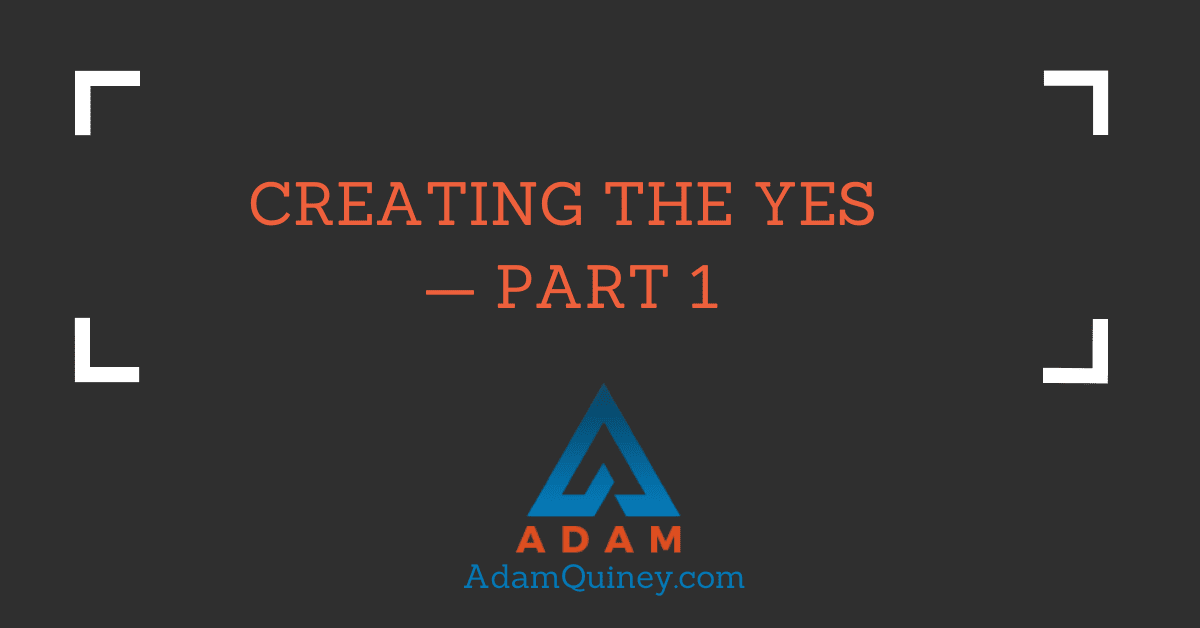 “So I’m going to share what your commitment to all of this looks like now, Mark, are you ready?” Jonathan checked in with Mark.

Mark nodded. He’d been in conversation with Jonathan for a few months now. He was clear that he wanted what was possible on the other side of this coaching relationship, and he was excited to start working with Jonathan. Mark was a little nervous too. He could tell Jonathan wasn’t going to be cheap, and Jonathan had been clear that that was not going to be the case too.

Jonathan swallowed and spoke. “Great, so your commitment will be a year of your life — spent in these kinds of conversations with me. You’re committing to taking on the practices we come up with between the sessions, so that this isn’t mere insight addiction. We actually want you to create real transformation and breakthroughs, rather than simply talking about them and feeling good. And,” Jonathan paused again, to take a sip of tea, and continued, “your financial commitment will be $50,000.”

Jonathan stopped talking after mentioning that number, and held silent.

This was the hard part for Jonathan. He loved the people he spent time with, and he wanted to see them win. He also knew that he was committed to a great deal of transformation, and he knew that Mark was capable of creating that kind of commitment to themselves. And lastly, Jonathan knew that it would be a challenge for Mark to be a YES – it would require a breakthrough, rather than being something free, easy and automatic.

The hard part for Jonathan was what stood in the way of that YES. That was what Jonathan waited to show up, now.

The silence stretched out for a while longer. Jonathan let it grow, and then eventually checked in.

“So, I’ve just put a tremendous number in front of you Mark. I’m assuming that’s the biggest number you’ve ever conceived of spending on yourself. Far beyond almost anything you’ve ever considered. How is that sitting with you?”

Mark spoke, and he spoke quickly.

“Well, you know, my first instinct is like ‘Yah, sure, no big deal, I’m sure we can make that happen somehow’. And then I start thinking about what I’ll have to give up, and I’m wondering, like, maybe I should wait on this? Is now really the right time? Like, even though I could make that happen, and I just need to figure out where to pull the money from, I’m wondering if things are actually bad enough that I should make a change like that. And I want to be clear that this isn’t about you Jonathan, you’re incredible, and I’m clear on that. I just, you know, I just need to think about this for a while, maybe talk about it with my partner.”

Mark eventually trailed off into silence. Jonathan sat quietly for a little bit before speaking again.

“Thanks for sharing all of that Mark. I noticed that we got into a lot of strategy there. Like, how to make it happen, or why not do it, etc.”

Mark nodded his head. He seemed relieved to not be talking for the time being.

Jonathan continued. “So nothing wrong with that, but I actually want to slow us down a lot more. The conversation we’re in right now is really a metaphor for how you show up everywhere in life — or at least, that’s what I’m asserting. I want to share a few things, and then I want to see if we can use this as a way to continue to support you. Fair enough?”

“Okay, awesome. So first of all, I want to be clear that I would love to work with you. I think you’re hilarious, brilliant, powerful, a born leader, and are here on this planet to do amazing things. Second, I don’t think you need to work with me. I think you’ll create awesome things in this world one way or another, and you are correct — your life is not that bad as it is right now. It is totally okay to stay right where you are and continue the path you’re on. There is nothing wrong with that and in fact, that would be a pretty great life.”

Jonathan checked to make sure this was landing for Mark. Mark looked a little relieved, and so Jonathan took that as a good sign and spoke again.

“Third, having said that last part, I do believe that we can go deeper with the support and partnership of someone else, than we can on our own. So even though I really believe you’ll have an awesome life regardless, I want to be clear that my stand for you is the depth that I believe is possible when we make a commitment like this one, to a partnership like yours and mine.”

That last part felt like it might be a little bit slippery for Mark, so Jonathan stopped himself and made a point of asking Mark about it.

“Is it clear that I’m not saying you’ll have a bad life if you are a NO to all of this?”

Mark nodded, with a smile. Jonathan laughed lovingly, and picked back up.

“Okay, good. So, having said all of those things, the last point I want to make here is that I am unattached to you saying YES to this commitment. I want you to really understand that while I would love to work with you, think you’re awesome, and do believe this work can take us deeper than we can go on our own, I also firmly believe that our path is our path, and the journey we’re on is absolutely perfect wherever it is currently leading us. It is okay for you to be a NO to this, and I will not judge you, think less of you, or even hold that there was a better decision for you to have made. Are you clear on where I’m standing in this?”

“Yes, that’s totally clear, I really feel that from you.”

“Okay great! So, now that that is all clear, let’s look at what’s showing up here, so that we can work with it.”