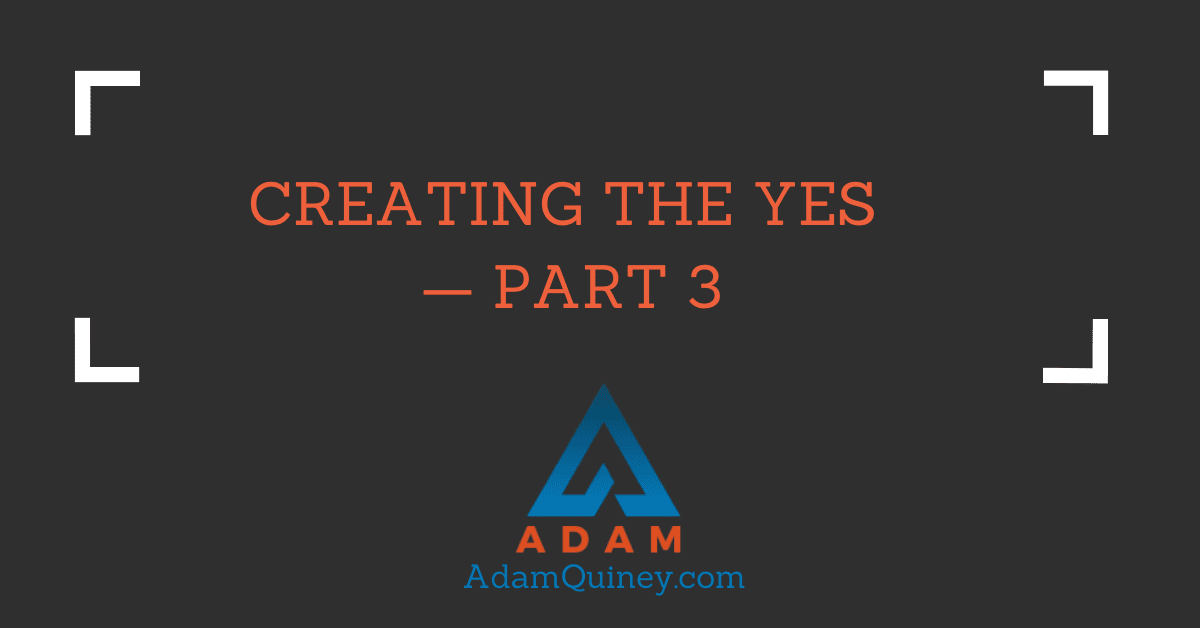 Jonathan was supporting Mark around what was getting in the way of beginning their work together.

“Okay, so Mark, even though I think we’re on the same page, I want to make sure that’s the case, because we can all get a little whacky when money is in place — would you like support getting past this block?”

“Great. If at any point you feel like I’m trying to pressure you or get you somewhere, just let me know and we can pull back. My belief here is that it will serve you to get you to a powerful, clear, YES or NO. Basically move past the waffling so you can make a decision now. On the other side of that decision, you may still need to go and talk to you partner, or your CEO, or whatever, but at least you will be clear on where you stand. Sound good?”

“Yes, definitely. I love that.”

“Okay! So, let’s start with this — my sense is that you want to be a YES, and you just can’t quite figure out how to make that work, as opposed to being a NO and not being quite sure how to tell me that. Is that right?”

Mark sat for a few moments before responding. “Yes, that’s right. I’m feeling blocked on this. I mean it’s so much money, it’s terrifying!”

Jonathan smiled and nodded. “I get that. Okay, so let’s start here, by looking at the gap. What is the gap for you? Like, is it that you have zero dollars in your bank account, or is it that you don’t know how to enroll your business partners in this, or is it something else?”

Mark thought for a while.

“Well, I’m not totally sure actually. I could see how to make a payment of $20,000. I could basically convince my partners of that, but this is a lot more. And honestly Jonathan, I’m pretty certain we can create this money somehow — like, I know that there are places I can generate this from, we could pull if we had to. What I’m really scared of is the thought that I gather this money up and pay it, and then I don’t show up. I’ll basically waste this money, and then I’ll be even worse off than when I started.”

Jonathan could relate to this conversation.

“Oh, I so get that! So let me make sure I’m hearing you — it’s not that the money wouldn’t require some work to create, or gather up, or amass or whatever. That’s going to need something to make happen, but it sounds like that is less of what’s going on for you, and the real thing in the way here is the fear that you might pull this altogether, make this investment, and then not show up in your commitment. Like you’ll basically do nothing, kind of let it slip through your fingers, and then be worse off than before. Is that right?”

Mark was quick to respond this time. “Yes, exactly. Like, if I had some kind of guarantee for this, then that would be different, but I’m really scared that I’ll make this bold step out into the unknown, or possibility, or whatever, and I’ll fall flat on my face and look like a right dickhead.”

Jonathan burst out laughing. “I’m sorry Mark, I’m not laughing at you, it’s just that you have an awesome way with words.”

Mark laughed together with Jonathan for a while, before Jonathan spoke again. “Okay, so, you’ve got a thing you want, you can see some real possibility down that path, but you’ve also got some fear showing up alongside this, particular that you’ll take a swing and fail catastrophically. That makes sense. So I’m curious now: do you have any evidence of this? Like, is this how things have gone in the past for you?”

Mark thought, and then it looked like he had a dawning realization. “Actually, No! I’ve pretty much never had things go poorly. I take risks all the time, and they really work out for me. So I don’t really know why I’m afraid of this.”

“Well, I want to be honest, Mark — I get a little skeptical when I hear that. Like, it’s almost like you’re trying to convince yourself that you don’t need to feel this way or have this fear. And I’m happy to let go of my skepticism and just trust you, but I want to check this out a little. My experience is that our fears are created for a reason. We don’t just fabricate them out of thin air, or because we think it might be a new way to introduce some entertainment into our lives.”

Mark laughed. “Haha, no I guess not.”

Jonathan nodded. “Okay, so, I’m guessing you’ve had some evidence of this. Like, I’m imagining that this isn’t the first time you’ve had this particular experience and flavour of fear showing up. Can you think of any places where this has happened before?”

Mark sat with that thought.

“Hmmm. Well, yes actually, now that you mention it. Like I had this big innovative idea with my partners and I. The opportunity was to shift our business model so that it made bigger use of crypto currency, like in the early days. This was when BitCoin was just starting out. I’d read the white paper, and I saw a ton of possibility behind this approach, but I was afraid that I’d lead us down that path and we’d make a huge mistake, and I would be to blame.”

“Well that makes sense. Okay, great, so there’s one place. How about one more example?”

Mark thought for a while longer. While he waited, Jonathan poured himself some more tea, miming a playful “You stay put” to his mug as he did so.

“Okay, here’s one actually, it’s a little silly, but like, when we’re cooking meals, I often want to break away and try new things. Or, actually, now that I’m thinking about it, it’s the same for restaurants, when my wife and I go out for dinner, I’ll always steer us toward the choices I already know are going to be good. And, oh geez, I do that with the way I order too.”

“Beautiful! Okay, so we’ve got some places where this isn’t the only place this kind of thing has shown up, and I would be willing to bet that there are some places where you’ve taken that risk, and learned it was a bad move. Like, you took that on and regretted doing so. Maybe you even created the catastrophic failure you’re worried about now. Would that be fair?

Mark adjusted in his chair while he thought about this.

“Yes actually. I mean, so like, on the silly level of restaurants, I’ll take a swing, and I’ll end up feeling disappointed. Everyone else is excited about their meal, and I feel stupid and like I made a mistake and, I’m a little embarrassed to share, but kind of resentful of them for enjoying their food this much.”

Jonathan nodded but otherwise stayed silent while Mark was in his process.

“And, oh.” Mark was deep in thought. “Oh yeah. I mean, I can remember when I chose my path in university and went toward the liberal arts initially, my family was so disappointed. They really wanted me to go towards software. Which I eventually did, but I’ve always kind of carried that with me. Like, if only I’d gone with that degree program, they wouldn’t have been upset, and I would have found myself here anyway, so it was just me wasting time and making a mistake.”

“Okay. That all makes a lot of sense Mark. So it sounds like we’ve got some good evidence, and some history for how this goes, yes?”

“Good. So, what I want to support you in doing is seeing this with some altitude. Basically getting up in the air so we can see the pattern as its played out, as opposed to being on the ground, taking the next step in the pattern and having it continue to repeat itself. I’m asserting that what’s showing up for you here, in terms of us working together, is just the next iteration of that pattern. Yes, the particulars of the pattern — like the pieces on the chessboard — look different, but the pattern itself is the same. Does that make sense?”

Mark thought. “You mean, like… even though it used to be about my degree program, or about what I order at a restaurant, and now about hiring you, it’s all kind of the same game. Is that right?”

“Yes, exactly! So we really want to get up out of the weeds here, and see the rules of the game. Kind of how the game will go for you. So that’s what I want to draw out now, so that we can see how this will all play out, as well as what is predictable, what the benefits of this are, and what the costs will be. You don’t even need to choose a different game or pattern to play — I just want to make sure you get to be conscious of it, in its entirety, so that you know what you’re doing and can make a fully empowered choice, rather than being a pawn in the game you’re playing. Sound good?”

Mark nodded his head slowly. “Yes. This is making some sense, as we’re going deeper into it. So we’re not even necessarily trying to make me make a choice, or fix anything. We’re just trying to see things … like, trying to see the whole picture. Is that right?”

“Next, we look at how this tends to play out, now that we have some examples. So, when you’ve got this fear, about making a choice, and falling on your face, possibly resenting people, what do you tend to do from there?”