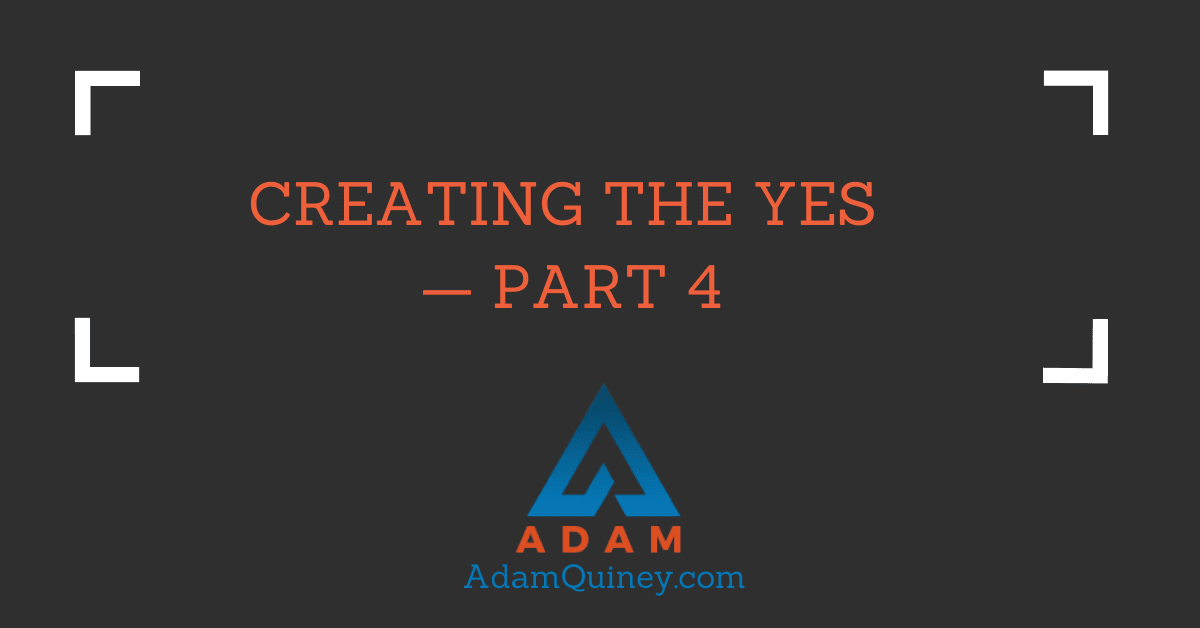 “Okay, so we’re looking at how this tends to play out, and we’ve got some examples Jonathan, but like… how do we solve this?”

Jonathan and Mark were partnering to support Mark getting beyond his fears. Mark wanted to work with Jonathan — that much he was clear on. But Mark has some things in the way, and was eager to move beyond them.

Jonathan paused and collected his thoughts before he spoke.

“Well, let’s slow down Mark. Before we can move through something, we actually have to see the whole thing. In Zen, they would say ‘You can’t leave a place until you’ve been there’. Most of us are so busy trying to leave a place, we’re not even really willing to slow down and take a look, and really be with everything we’ve created. So that’s what we’re going to do next. Really get a sense of how this all goes.”

Mark was champing at the bit, but he trusted Jonathan. He took a breath.

“Awesome. So, we’re clear that this isn’t the first time you’ve run into this kind of fear — basically that you’ll say YES to something, and then be left disappointed, and having let yourself, or others, down. Correct?”

“Great, so let’s break down what happens from here. Given that that is the fear, what strategies have you learned to take on to overcome, adapt, or work around this fear?”

Mark thought and then spoke. “Well, I guess I could … like, I could just do it anyway. Or I could tell myself that this is just fear, and that I’m definitely not going to disappoint people, and so that would be okay…”

“Let me jump in Mark. You’re doing great, but it sounds a bit like you’re trying to figure out how to not let your fear stop you this time. Is that right?”

“Yeah, exactly. How do I have it go differently this time, right?”

“Right — which is a good thing to ask ourselves, but only after we’ve clear on how this all goes. What I’m asking you to distinguish right now is, assuming this will go exactly the way it always does, what will happen. We’re basically looking at the past, just to see what is predictable. Make sense?”

Mark thought about that for a while. “Yes. Okay, so, I get scared, and then what do I typically do?” Mark closed his eyes and sat in silence for a while, before speaking again.

“Well, okay. So first thing, most obvious, is I just don’t choose the thing. But I want it, so I’ll hem and haw and delay things for a long time. I’ll really draw out the decision.”

Jonathan made notes as Mark was talking. “Got it, okay, so resist saying YES to what you want to say yes to, in an effort to avoid disappointment, but also to not have to say no. And then what happens?”

“Well, then I’ll think about it for longer, and it’s like it builds up a bunch of tension.”

“Got it. Are other people present to this as it’s happening?”

Mark looked thoughtful. “Hmmm, well, I think sometimes they are, but other times, it’s just me. But either way, I would definitely say this puts added pressure on the decision. Like the longer I’m sitting in it, the more it’s like… hmm, I guess like the stakes are raised.”

“Okay, great! So there’s one way it goes. What else will you do?”

“Well, because I’m so concerned about making the wrong decision, sometimes I’ll just be an immediate No! Like I’ll just not even be open to considering the opportunity, and I’ll… well, I guess I’m basically trying to save myself from the disappointment that I’m worried I, or others, will feel. So I just take the route that’s kind of safe — it’s like the devil I know.”

Jonathan was twirling his pen in his hand. He loved this conversation — being with someone as they were distinguishing their pattern, and slowly gaining some altitude and seeing the overall dance they were in. It never ceased to thrill him.

“Okay, so, how does it go for you when you choose the safe option? Does it work out?”

Mark thought, and then a new look came over his face. “Actually, no. Not at all. Like, I avoid the immediate … like, the sharp disappointment, but usually I’m disappointed for days if not weeks after the fact. I’ll stew on the decision that I left behind — what could have been. I still feel disappointed about the crypto opportunity that we passed up. It’s almost like I choose long-term disappointment that kind of ebbs out of me, rather than run the risk of short-term disappointment.”

Jonathan nodded, and stayed quiet for a time.

“Well that kind of makes sense Mark — what we resist, or try to avoid, tends to be what we get more of. Like, if we put all of our attention on driving into the ditch, we tend to be continually skirting the edge of the ditch, or driving right into it, rather than driving towards what we truly want.” Jonathan paused to take a sip of tea before continuing, “So, what do you do to deal with that disappointment when it tends to still be there. Like, I’m guessing you don’t just wallow in it, since that’s the very thing you’re trying to avoid. So how do you try to mitigate that?”

Mark pondered. “What do you mean? Like, the disappointment IS there right?”

“Sure, but given everything we’ve uncovered so far, I’m guessing you wouldn’t just hang out feeling disappointed. I suspect you do things to try to mitigate even that small piece of disappointment that stays present, yes?”

“Okay, actually, yes. Like, I’ll try to convince myself that I’m happy with what I have. I’ll double down and find reasons and justifications for why, what I’ve created, or gotten, or built, is actually exactly what I wanted. It’s like I’ll find a way to really be content with the 8/10 that I’ve created, even though a part of me still wishes I’d gone for it.”

This was making sense to Jonathan. He could even see some of himself in this strategy.

“I can totally relate to this Mark. One of the things I learned to do was put my attention on what I need to do, rather than what I wanted to do. It was like, ‘Hey, I can have what I want, after I get done everything I need to do’. Do you do anything like that?”

Mark took that in and sat with it. “Yes, I think so. Like, actually… now that I’m thinking about it, definitely. Oh wow…” Mark paused. “Wow… I can see that if I keep all of my attention there, I never even have to run the risk of doing what I want and possibly failing or creating disappointment. Like, I’m never going to finish doing what I need to do. I can just put my attention there for the rest of my life and never ever get around to doing what I want.”

Jonathan felt the shift in Mark’s energy. It was electric on the call. Jonathan was drawn in and his body felt open — Mark was doing the work! There was one more area Jonathan wanted to look with Mark.

“Mark, you’re doing /incredible/ here, and I think you can feel it — I certainly can. Here’s what I’m curious about in this moment: how is it that you actually create the part where you feel epically disappointed? Like, we can see how you create a low-grade kind of continual disappointment. But what about those moments when you really create a sharp sense of disappointment?”

Mark was puzzled. “Well, but… isn’t this all about how I avoid that?”

“Yes, AND, I’m a believer that we are the ones creating all of the experiences we’re having in our life. You’ve shared that part of how this goes is that you actually have evidence that you’ll make a decision and it will be really disappointing. So how do you create that?”

Mark felt a little stymied with that one. Jonathan kept his eyes soft and open, and loved Mark, while not removing his focus from him. Mark thought, feeling a little sweaty under Jonathan’s gaze.

Mark thought some more, and then the wheels started to turn.

“Okay, actually. Now that I’m thinking about it, I guess one of the things I’ll do is just dive in. Like, I’ll get so frustrated by all of the hemming and hawing that I’ll do, that I’ll make a rash decision and dive in before I’ve really thought about it, in the hopes that I can somehow avoid that. And then, on the other side of that, I often really regret my decisions.”

Jonathan wanted to jump out of his seat, he was so excited. Instead, he just sat with Mark and let him be with what he’d opened up.

“Well, first of all Mark, really great work! You’re really creating some altitude for yourself here. Second, it seems like we’re at the crux of it. Either way, you’re kind of set up to re-create the very thing you’re trying to avoid: disappointment. Either that of yourself, or that of others. So, my question for you is — where do you see yourself, in this pattern, with regards to where we are right now?”

Mark sat silent for a number of minutes. Jonathan sat with him. Eventually, Mark spoke.

“Well, I think I’m trying to avoid making a decision that will lead to disappointment. I’m trying to protect myself from that sharp feeling of letting myself or others down.”

“Got it. Okay, and so what’s predictable from there?”

“Well, I suppose I’ll be a No, out of safety. Maybe I’ll hem and haw for a long time, and then eventually be a No. It’s just a matter of time.”

Jonathan nodded. So here they were. Mark was clear on the pattern, and could see what was next. The only thing left was helping Mark make a choice consciously.