Do You Have Hope Fatigue? 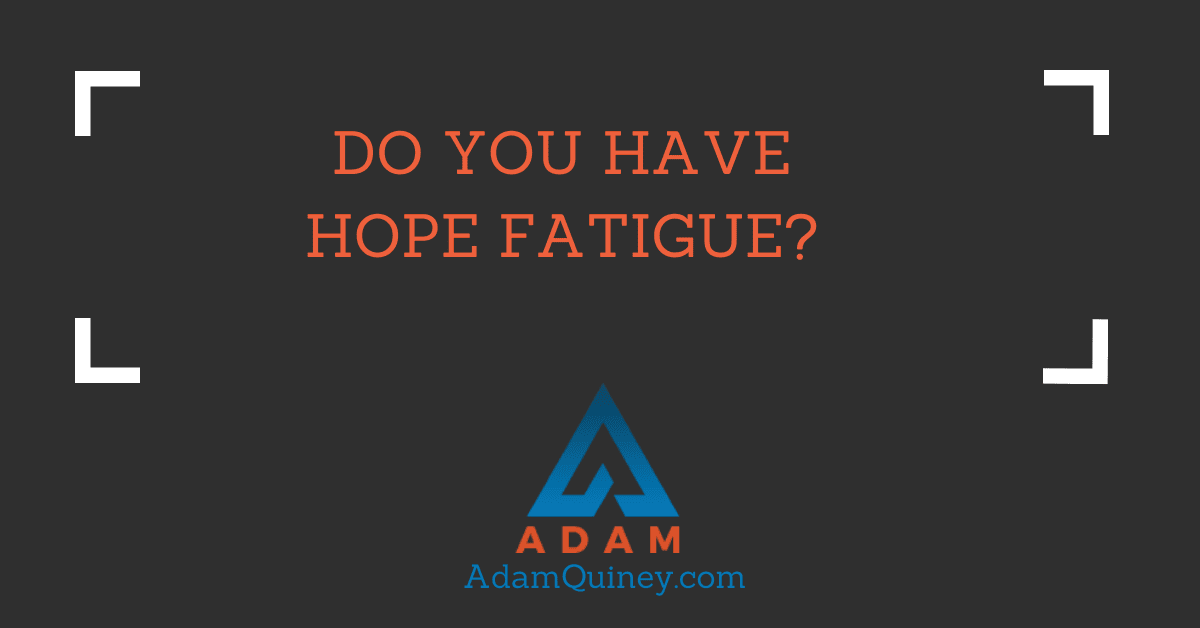 The upshot of all of this is what I would call /hope fatigue/.

Most of us have had some kind of experience that has led to hope fatigue. We’ve gotten excited about the promise of things shifting for ourselves, only to find that despite taking diligent notes, dutifully following along with the exercises, and returning home to put our best foot forward, life seems to stay relatively the same. Even though you were initially excited, and maybe even inspired, about the possibility available if you really took on this work, what you’re left with is one more piece of evidence that, actually, things won’t really be any different.

And if you keep getting your hopes up, only to have them dashed, over and over again, sooner or later what makes sense is to resign ourselves to the way life is, and then make the best of what we have.

You can hear when you might have some hope fatigue present when you start to say things like “I think I just need to learn to be happy with what I have”, “Maybe I need to put attention less on the future, and more on creating happiness right now”, and “I’m just going to stop forcing things”

While these are all admirable (and maybe even necessary) aspirations, the problem is less what they represent, and more the underlying way of being from which they’re arising. That sounds kind of complicated — what I mean is that it’s a great thing to put attention on being happy with what you have, but as soon as you put that at odds with creating the future, or make your happiness right now mutually exclusive with going after your desired life in the future, you’ve got hope fatigue. The statements above are actually more about your resignation, than they are an expression of some new kind of possibility for your experience of life.

Or maybe you’ve worked with coaches, and it sounded really positive and seemed like it was going to make a difference, only to discover over time that you were just creating new ways to move the furniture around in the same apartment. Changing the water in your aquarium, so to speak, rather than getting out into wide-open ocean, where infinite possibility lives. Yah, life is incrementally better… but you can kind of do this on your own, so why not just save the money?

We notice that people tend to come to us after experiencing some degree of hope fatigue. They’re skeptical of coaches at this point in their lives, and especially skeptical of events promising something different. They’ve been promised those same promises before, and it hasn’t been any different. In fact, it’s just provided more evidence that the greater the promise of things being different, the more likely they are to be the same.

That’s often what we’re up against when we’re enrolling.

The promise of THE Intensive, is that you don’t leave the way you come in. That, at the end of these four days with us, you will leave a different person — truly transformed. You will leave having created whatever seismic shift is required to give you an entirely new experience of your life. We do this, not by giving you techniques, or talking about transformation, but by co-creating it with you in the moment. By inviting you to step forward into your life — into what is scary, but also what is next — right there, in the moment. In doing so, you don’t have to take dutiful notes, go home, and then try to put into practice what has been provided. You go home having already grounded and integrated your work. There’s nothing to put into practice when you leave — you’ve already created the shift. You’re already showing up as a different person — the person more deeply aligned with who you came on this plane to be.

You simply return home and … /be/.

And, when we’re making a promise like that, we’re up against hope fatigue. Maybe you’re already feeling it as you read this. That’s okay. Neither your job, nor my job, is to make hope fatigue go away, or to pretend it isn’t there.

Our job is to acknowledge that this is part of what comes along with transformation — and then to not let it stop us.

When you’re ready for things to be different, and to get past hope fatigue, this is the event, and this is the time.

If you’re stuck, reach out for a conversation. You don’t have to convince yourself that this is something different. Be in a conversation, and experience it. (Because why wait until the first day of THE Intensive to start creating your life?)

And if you’re not stuck, well, maybe now is the time to choose in.