Does your on-ramp lead to more of the same or to new adventures? 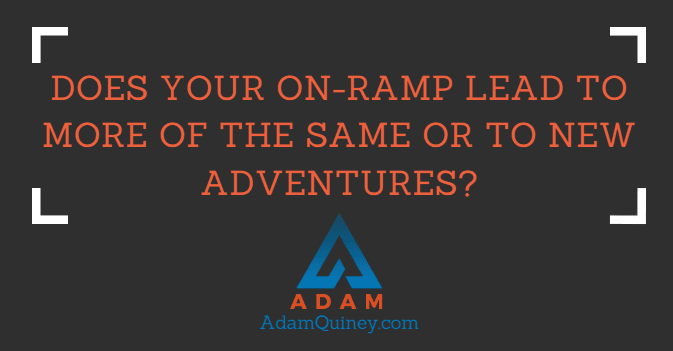 Ever since you’ve been a child, you have been awarded prizes. The prizes may not have been tangible prizes — they may have come in the form of love, or recognition, or applause, or something else. Prizes aren’t only the presence of something positive; they can also be the absence of something negative. Perhaps the prize you were rewarded was a reprieve from being scolded, lectured, nagged or abused.

You’ve also learned there were punishments for other ways of showing up. Again, not necessarily tangible punishments — they may have been as simple as a look, a rolling of the eyes, a lecture, or the end of whatever prize you were currently enjoying.

Inside the narrow band of what would be punished and rewarded, you’ve learned to create mastery. Your mastery is composed of all the strategies — ways of showing up in life — that would earn you prizes and avoid the punishment.

Not only do you seek out the prizes and avoid the punishments attached to these strategies — you create a whole host of ways to solidify and reify their existence. You look for the same behavior in others, and associate with those that conduct themselves along the same lines. You judge other people the same way you judge yourself internally, doling out the same rewards and punishment you were trained in so long ago.

Or possibly you learned to go to the other end of the spectrum, rewarding and prizing the very patterns of behavior you were punished for, and holding with disdain the strategies you were encouraged towards when you were young. It feels different and rebellious, but it’s still the same game. Whether you drive in the left-lane or the right-lane, you’re still driving on the same highway. You’re still caught in the narrow band set out by this structure.

The world around you is a reflection of your prize-payout or reward-structure.

Your relationships reflect these prizes and punishments. The people you spend time with go for the same kind of prizes you do, reward others (and especially themselves) with the same kind of rewards you do and punish and carry judgment and disdain for the same ways of showing up that you do. You likely have a partner that shares some of the same reward structures you do, and runs the opposite of some of these structures (i.e., they’re driving on the same highway you are, just in a different lane).

You almost certainly have a career that reflects the kind of prizes you know to give and receive, as one that punishes the same things you know to punish. The life you live can, in large part, be determined by looking at the things you’ve been trained to approve and disprove of. (Was having a lot of wealth approved or disproved of growing up? Almost certainly you have a life reflected by one of those two extremes. You’re either very wealthy or constantly struggling with money — and most likely both).

Driving this highway means you get to move to and from your destination at an increased rate, but it also means you are trapped in one of two directions — either coming or going. The speed at which you get to move, and the nature of mastery leads to a kind of self-imposed blindness. You don’t tend to look in directions beyond forward and backwards and tend to glance past the on and off-ramps (you already know the most efficient means of travel is to stay on the highway).

You would never consider in a million years turn your car sideways and travelling in a new direction, and because the road is so efficiently laid out, that makes considering destinations lying in some direction other than forward and backward a cognitive burden at best and a dangerous endeavor at worst.

Early on, the thrill of building a highway and driving fast along it (aka, developing mastery) is usually its own excitement, and keeps you from putting too much attention on the costs of this pattern, but as you continue to age, you notice pitfalls in your approach and a general dissatisfaction with the limitations to your current reward-structure.

I know you can grasp this intellectually. Most of us can understand, even when we’re on the highway, there is more out there available for us. I’ve seen you share memes and posts about the importance of doing so. I’ve seen you give advice and judgment to people doing exactly this and are unwilling to step beyond it.

What I wonder is, when you are going to move from thought and knowing, to being the shift. If you are able to notice yourself on the highway, what are you going to do next?

Spending more time on the highway doesn’t make you any more prepared for the step of changing lanes and driving onto the off-ramp — it just makes you more comfortable driving on the highway.