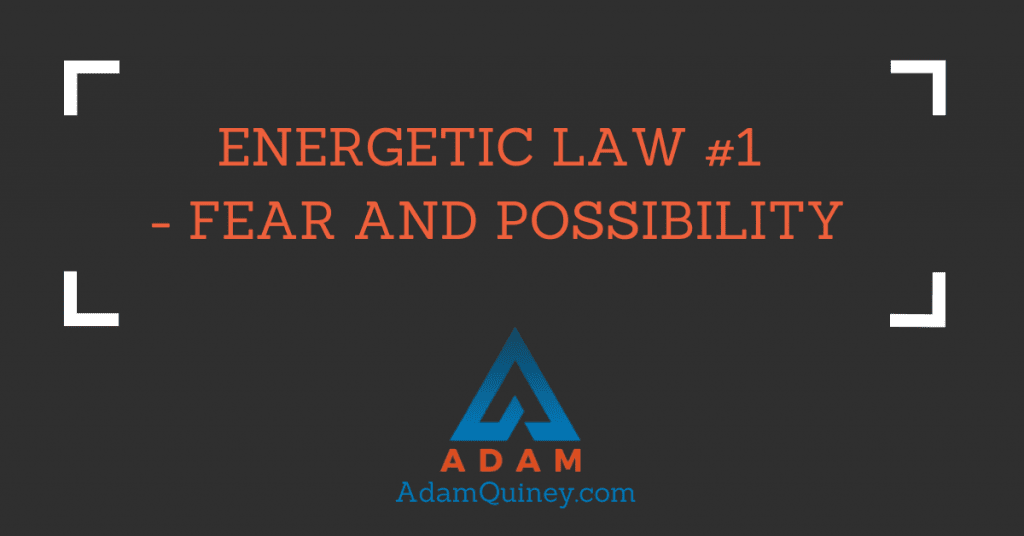 In order to talk about this law, we have to start by defining Fear and Possibility.

The realm of predictability includes things that are not yet available for you, but remain possible, without any real breakthrough on your part. For example, when I was working as a software project manager, managing my time effectively, making logical decisions on the fly, and so on, going to law school, getting a degree and becoming a lawyer was all inside the realm of predictability for me.

Ironically, we usually relate to everything in the field of possibility as though it is impossible. We may not yet have everything we need to attain what is in the realm of predictability, but we know we can figure it out. We may not even really want to do the stuff required, but we still recognize how to get there, if we chose.

Possibility isn’t like that. Possibility is the kind of thing that when asked if you would like it, you tend to say “Well, sure… but that’s just not possible”, and then return your attention to the realm of predictability.

Possibility exists in the realm of the unknown. It lies beyond the world of what you know (including what you know you don’t yet know). It lies in the vast, wide-open parts of life that simply are not in your purview.

And this is why possibility is always met with fear. Your fear is designed to protect you from venturing forth into the realm of the unknown. Your fear’s goal is to keep you here, in the status quo, where you know what will predictably happen, and know how to deal with what that is.

Evolutionarily, this is a very valuable trait. As long as we keep you here, where things are known and you know you can cope with whatever shows up, you’ll likely be able to stay alive long enough to propagate your genes forward. The dummy that went out into the darkness probably got eaten by a tiger. And so fear serves its purpose.

But if you want to live a life of transformation — that is, a life where you are continually stepping into ever greater amounts of possibility — your fear will be in the way.

It’s worth finishing up by noting that fear may not look the way you think it will. Fear is often experienced as rational, reasoned resistance. Putting your attention on “what is realistic” is an example of resistance — not because there’s something wrong with being “realistic”, but because you are putting what is realistic at odds with possibility, rather than allowing for them to co-exist.

Your fear may look like getting incredibly busy, so you don’t have to take the scary action towards the thing you really want. It may look like you continuing to date someone you know is wrong for you, because that feels safer than confronting the possibility of being alone while you go after what you *really* want. Your fear may show up by having you spend all your time putting out the fires in your life, rather than ever getting clear on what you really want for yourself.

Whatever it is, and however it looks, fear showing up is a good thing — it means that you’re in the realm of possibility.

Learn more about each of the The Energetic Laws of Leadership here.