Excerpt from “The Spectrums of Being — Introduction” 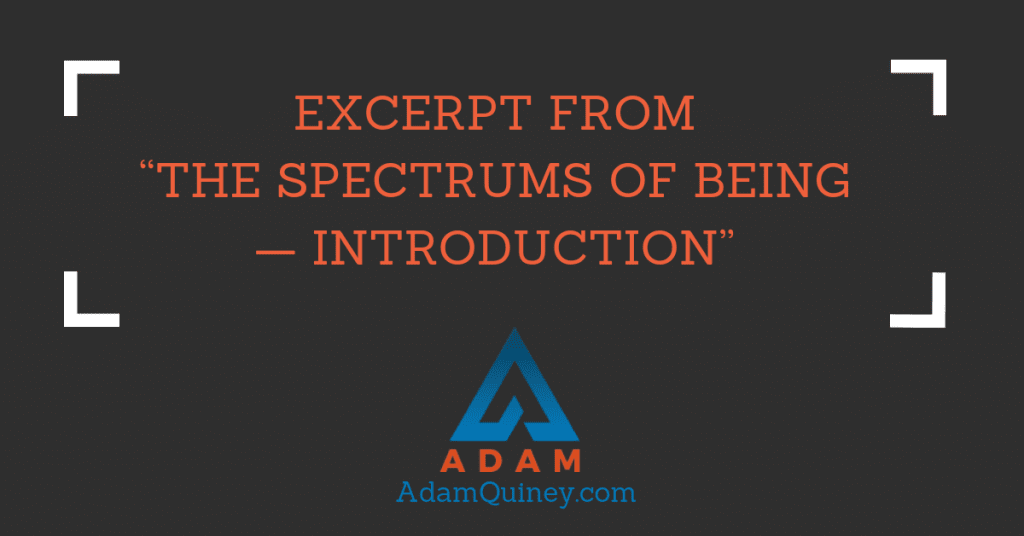 Brent was frustrated. His staff were struggling and he didn’t understand why he couldn’t seem to motivate them. When he had hired Carol initially, she had been committed and a true believer in the product-line Brent had hired her for. Carol had been devoted to the work in front of them, and put all of herself into the project.

However, as time wore on, Brent noticed that Carol started to become flakier with her time. She seemed to alternate between rigid, almost tyrannical adherence to project timelines (including what she demanded of her team) and bailing out of commitments and deadlines she had promised. When Brent tried to help her set up systems to make sure that she stayed on track and on target, Doris got frustrated and angry with Brent.

Brent’s other team lead, Doris, was a brilliant engineer. Brent had initially hired her because of how sharp her mind was. She had already seen the possibilities available for the product Brent was launching, and before the end of her first week, Doris had contributed in some significant ways. In fact, Doris had helped them see the potential to launch their product through a vastly different approach than what they had original planned, and had helped them avoid a costly re-engineering process that would have slowed them down and cost a great deal. Throughout all of this, Doris had been an ocean of calm — her staff had been deeply appreciative of Doris’s ability to provide them the answers they needed to keep moving forward, while keeping things easy and peaceful regardless of the steps they were walking through.

Doris was indisputably brilliant and one of the smartest people Brent knew. But as time went on, Brent had noticed that Doris had become harder and harder to work with. While her initial plan to re-engineer and relaunch their product had been spot on and perfect, at times she had other ideas that simply weren’t feasible given other factors in the company. Rather than remain peaceful and easy-going through these conversations, Doris would get condescending and outright nasty. Instead of the peaceful presence Brent (and her team) had come to rely on, Doris would get frenetic with her energy. She would end up dividing her time between the task at hand and other tasks devoted to proving why her ideas simply had to be implemented. The diffusion of her energy this way was causing problems not only for Brent and the rest of the executive team, but also for Doris’s direct reports.

Finally, Brent himself was wondering if he had made the right decision in founding this company. While Brent had originally felt like being an entrepreneur and forging into the unknown was the reason he was on this planet, as things had moved forward, he’d started find himself more worried and continually concerned about the impact his decisions would have on the rest of his employees. Decisions stopped being fun sorties into the unknown, and became moments he learned to dread. Brent found himself less able to make decisions on his own, and noticed that he was leaning on the members of his executive team more and more to make decisions for him.

What frightened Brent most of all was the amount of judgment he was present to during his work day. While Brent knew himself to be kind and inclusive, he found himself operating with a shorter and shorter fuse. Brent was regularly thinking about firing people for the slightest provocations, and noticed that he was labeling certain members of his staff and fantasizing about throwing them out on their ear. Brent had always been willing to do the hard work of leading, including letting people go, but he noticed that this felt different. This felt… cold-hearted.

Brent wasn’t sure what had gone wrong. While things had started out so promising, they had slowly devolved into a mired-down, unpleasant work environment. Something needed to shift, and Brent could not seem to find the right actions that would make the difference. He had tried instituting performance reviews, and regular check-ins. He had tried 360 reviews for his executive team, and set up regular meetings for them to provide each other with feedback for how they were doing with the changes they were trying to make.

Brent had also tried to handle this with his own ingenuity, sitting down and figuring out what he felt would resolve the issues for each of his executive team. More structure and ongoing check-ins for Carol, Doris staying focused on the task at hand and watching her condescending tone, and for Brent, making decisions regardless of the consequences and reminding himself that he knew best, on some level.

Brent was at his wit’s end. If he couldn’t solve this, he concluded it was time to exit the company.

Where Brent finds himself is characteristic of most leaders in most organizations, after a certain point. Brent has started a company and hired great people, based on the strengths and gifts he saw in them and in himself.

While at first, these gifts lend themselves beautifully to the entrepreneurial process, over time, Brent, Carol, Doris, and the rest of their team start to develop friction with one another. This friction is a natural part of humans working together and taking on anything outside that lies beyond the realm of what is predictable. As Brent and his team push beyond the boundaries of their comfort zone, their truest nature — the gifts for which they were brought together — starts to get clouded by their shadows. These shadows are the tendencies that show up when we are confronted.

While Brent is noticing Doris’s arrogance and condescension, and trying to resolve this behaviour on the surface, what he is unable to see is that these traits are exactly how we would expect someone with the quality of Brilliance to show up when they’re feeling afraid. Perhaps Doris is left feeling stupid, or like her opinion is no longer valued. Maybe Doris feels like she’s been eclipsed and no longer has a place on the team. Whatever it is that is triggering Doris and driving out her shadows, Brent’s attempt to control and manage these aspects of her being are missing the mark. Before Doris can really get ahold of what is going on, they need to get down to the root.

Even more problematic, Brent’s earnest attempts to move Doris out of her fear-based patterns actually reinforce the fear. Rather than get at the heart of the matter, Brent’s directive that Doris stop focusing on other things, and look only at what she has been tasked with is likely to perpetuate her fear of becoming irrelevant, further driving up her fear.

Brent, like so many leaders on so many other teams, is trying to address the patterns that show up on the surface, because those are immediately apparent. Like trying to shift an iceberg by applying pressure only to the part that lies above the water (because that is what we can see), the impact tends to be minimal and only seems to keep the same problems present.

As time wears on, Brent’s efforts to address the dysfunction that is starting to show on his team proves fruitless, and Brent reaches the conclusion that many leaders arrive at: the problem is either an employee or the job itself. It’s time to either fire someone, or leave the company entirely and do what’s next.

Although these solutions will create a shift, they do nothing to deepen Brent’s ability to lead, nor to draw out the leadership in his team. Instead, Brent will create a new circumstance, free of the dysfunction he is stumped by, until enough time passes and he ends up recreating the same issues.

What Brent is unable to see is that these shadows are a fundamental aspect of the light that casts them. If Brent wishes to work alongside Brilliance, he will need to develop the ability to work with the shadow sides that show up along the way: Arrogance, Condescension, and Rote Stupidity. Absent taking on this work, Brent’s employees will have a diminishing half-life. They will be hired on and do great work, until, inevitably, the friction of being in relationship with other humans starts to drive up their shadows. As Brent’s ability to work with these shadows atrophies further, he’ll have less and less patience before he ends up making a new round of firings.

In your hands you hold the key to all that ails you. A book that can revolutionize your approach to your relationships, your leadership, and the fat lunkheads you have to support at work. The Spectrums of Being is a model for how people operate in the world, how we ended up being “the way we are”, and how to get back to seeing and working with people as they truly are.

Many management approaches and assessments operate from the lens that people are fixed objects with “set” aspects to their personalities. Some people are deemed “uncoachable” or “poor candidates for leadership”, and rather than get at what lies underneath, we hold that as a biological imperative — something they cannot overcome, and that we certainly do not need to expend effort trying to shift. It’s not our fault, nor our failing as a leader — it’s theirs! This is a relief, but it also means we are powerless to do anything about it, other than fire the poor candidate for leadership and move on.

The Spectrums of Being are a model for relating to people, and how people got from where they started, to how they’re showing up today. By learning what lies underneath the obnoxious or frustrating tendencies people have in moments of confrontation, you’re provided with the opportunity to see past the surface and to the gift that lies at the heart of each person.

Rather than relate to people as their fear (which can show up as arrogant, dense, foolish, fickle, obnoxious, wimpy, tyrannical, narcissistic, selfish, and many other ways), the Spectrums of Being provide a way to walk yourself back to the heart of someone, and begin to work with them from this fundamental greatness.

The Spectrums of Being explains why you seem to continually run into the same kind of problematic personality types, and why your attempts to resolve this kind of dysfunction on your teams doesn’t seem to work (and if anything, is becoming less effective as time wears on). In addition to providing the altitude needed to understand what is really going on with you and your team-members, the Spectrums of Being also provide a path you can walk back to get to the heart of the matter — to forging truly powerful teams and growing the seed of leadership that exists in the heart of every human.