Forrest Gump and his Relationship to Money 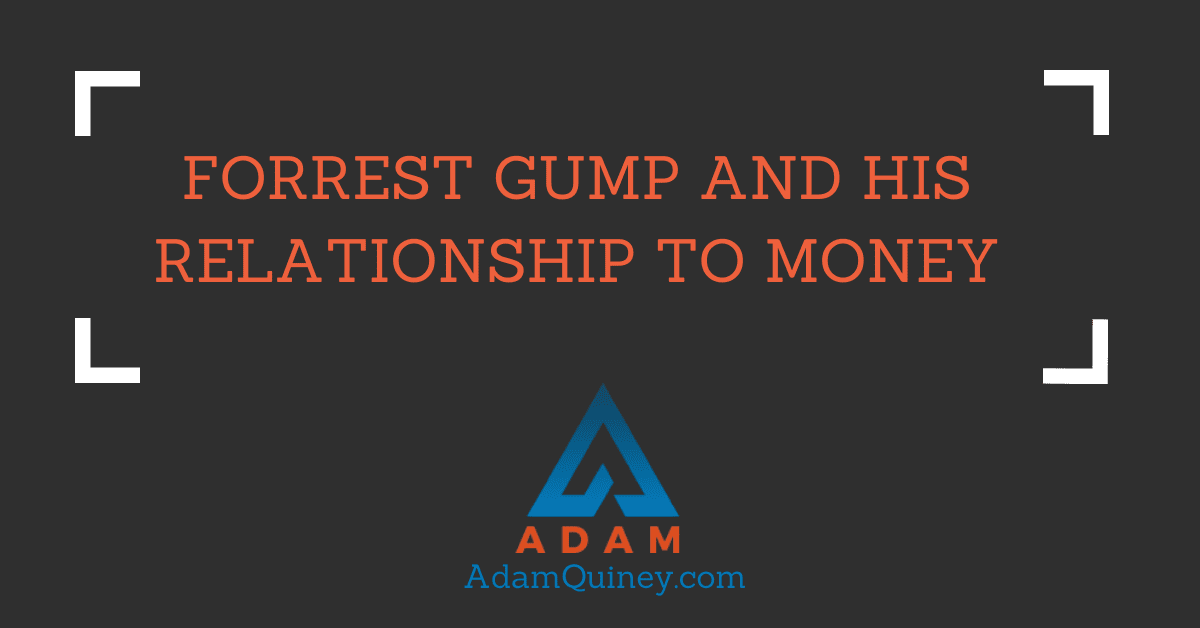 When I turned fifteen, I had a crappy birthday. I got into a fight with my brother, and school was really tough, and I was probably experiencing some kind of disappointment around the way things were going and the presents I’d gotten. Nothing felt good.

My brother and I got into it, and I stormed out of the house. I didn’t know where I was going, but I was going to walk somewhere. And so I did. I walked the forty minutes to the nearest bus stop (we lived in a fairly rural area) and sat down on it. I wasn’t really intended to take the bus, I just had nowhere else to go, and there wasn’t much else around me, so the bus stop was as good as anything.

That was when I met Forrest Gump. He wasn’t actually Forrest Gump (just to be clear about that. He’s actually a fictional character). But he occurred kind of like I remember Forrest occurring at the bus stop with the people he was waiting with. Weird, awkward, open, friendly. Some kind of simplicity in his wisdom.

My Forrest Gump was a former construction worker and I think he now was a foreman or owned a company. He talked to me about how he had really expensive road bikes that he rode, and how he had women wanting to work out with him because he looked great (for a fun image, imagine Forrest Gump saying those things). He told me how he didn’t worry much about money, and always carried around $1,000, just in case an opportunity arose. And then he took out his wallet and showed me all the ten hundred-dollar bills he kept in there.

I didn’t really like talking to him that much. I mean, in truth, I didn’t really like talking to anyone that much — I was an awkward 15 year old kid. I was shy and scared most of the time. My fear was mostly about coming off as awkward and weird, so most of the effort I put into conversations was to seem charming and affable. I nodded my head and asked this odd man questions that feigned interest. I wasn’t really that interested in him, but I was also sad and feeling crappy on my birthday, so I didn’t know what else to do. I was in a conversation, so that seemed like something.

I asked him questions and acted like I was interested. I guess I might have been on some level (if I were to run into that man at the bus stop now, I would be fascinated). I was mostly trying to show up like a normal human would, in a conversation with a weirdo showing you his grip of cash at the bus stop.

One thing was clear though: this guy’s relationship with money was different than mine.

One of the common themes around money currently, is that it’s scarce and not the time to invest. That’s a pretty big one — and totally understandable too. We’ve got all the circumstances in the world providing us evidence of the truth of that, along with every single other person in society acting in alignment with that same story about money.

So you don’t have to look very far to have it reflected back to you. And when we see a lot of social proof for something, we’re automatically wired to go along with it. The wisdom of the herd is genetic and biological.

I’ve seen a lot of coaches and clients up against this story. They’re in conversations with people about working together, and, not surprisingly are bumping into this story.

I want to be clear that this post isn’t a conversation about how you’re wrong for your current story about money. Whatever you are currently holding to be true, I trust is perfect for you in this moment.

This post is about what it looks like when we try to step past our fear into possibility — into the unknown.

We’re trying to enroll people in their lives, and invite them to look at what might be possible outside of their current circumstances — outside of the way life currently goes. As soon as someone gets present to what could be, the first thing they’re going to notice is that there is something in the way (if there wasn’t, they would already be doing whatever it is we’re looking at, and so there would be some new level of possibility to put our attention on instead).

The first and most significant thing that gets in the way is usually money.

We ask if someone would like to take on this work with us, take on this investment, make this leap into their lives, and the answer we hear back is “I totally would! It’s just that this is obviously not a good time, and I’ve also got X to take care of, and Y to think about. Maybe in a few years.”

We try and support someone here from within their story — because it’s our story as well. It’s not hard for me to see the obvious truth that now isn’t a good time to invest, because that’s how I’m holding it too.

We’re kind, compassionate and understanding, and we accept where they’re at and maybe ask if we can follow up later. I mean, what else can you really do from inside this story? You can try to convince people that it IS the right time to invest, but you’re going to be doing so knowing full well that you are manipulating them — your very own story tells you that what you are convincing them to do is not the best move. Consequently, we can’t really show up powerfully for anyone.

Outside of that story though, the world can look incredibly different.

What about if the context — the story at play here — was that there’s never been a better time to make an investment like this? What about if the belief we were operating from was that those that invest during this time are going to be the ones that come out of this calamity with their feet on the ground running?

That might give us a different perspective. We may not even take different actions immediately (you still have to put food on the table, you still have to find a way to keep bringing money in), but it might completely alter the way you’re relating to your circumstances. And it may mean that your actions change sooner, or even that you take different actions altogether, when that is the context you’re operating from.

The challenge with holding a frame like that is that it only works when you take actions aligned with your beliefs. This is why positive affirmation alone simply does not work — you are hoping to think your way to something different, rather than being willing to act in alignment with those new beliefs. You have to buy into your own belief, and you can’t convince yourself of that — you have to live into that belief through your actions. And in doing so, you actually create the belief for yourself. It becomes your truth.

And this is where many coaches, investors, and other leaders fall down. We want to invite other people to step into this new belief, but we aren’t willing to do it ourselves. It’ll never work. You can’t invite other people to step into a new paradigm before you’ve stepped into it yourself. This is the imperceptible difference we can feel when we’re around someone that tells us they’ve done a bunch of deep work, and someone who truly feels deep.

Or is it time to create a new belief and step into it?