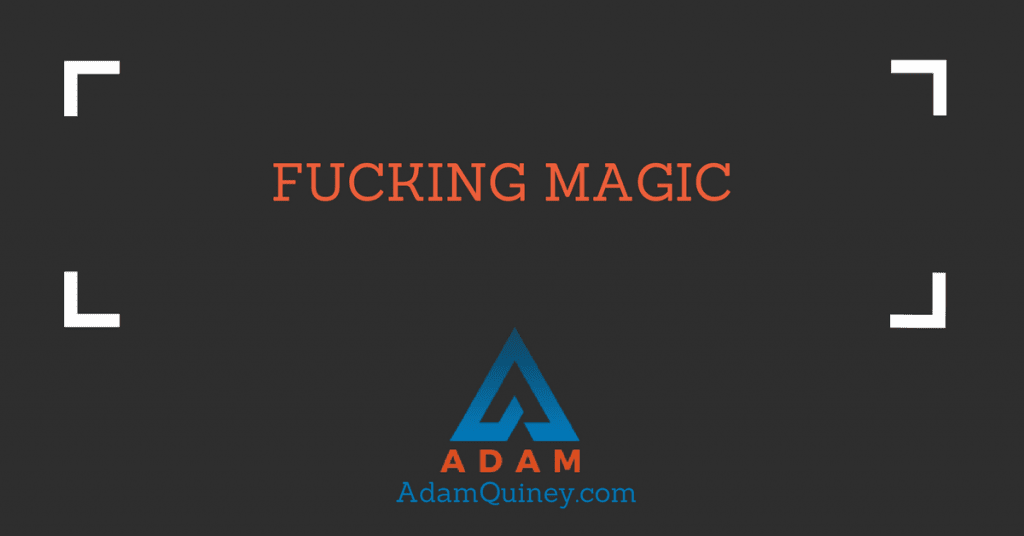 I’m not saying very much about the goal that you’re sharing with the group.

You’ve decided what you’re going to create this year — in fact, it already feels like you’ve created half of it, just in your speaking.

You’ve looked at me expectantly a few times — you know what I do. This must be right up my alley, you’re thinking. I’m probably pretty excited for you.

But I’m sitting quietly, more a part of the background than the foreground, because I already know why you’re not going to create that goal.

The problem isn’t that you’re announcing it to the group (contrary to what 50% of the goal-based research claims).

The problem isn’t that you haven’t made it a SMART goal, or “chunked” it down into small enough bite-sized pieces. The problem isn’t even that you don’t have a coach (though, if you did, they would hopefully point to the same thing I’m going to).

The problem is that you’re lying to yourself.

What I secretly know is that you don’t actually want to win at that goal.

You say you do.

In this moment, you’re pretty jazzed up about it. You’re pumped.

If I let you in on this secret, you’d laugh in my stupid face. You’d shake your head and think to yourself, “and he calls himself a coach?”

But your reaction isn’t the point.

The point is that underneath all of the veneer of the enthusiasm, excitement and self-certainty of the moment created by your momentary determination, you don’t actually want this thing you say you want.

Losing 20 pounds sucks. It’s not fun. Losing 20 pounds means restricting what you eat. It means starting exercise that you haven’t done before. It means getting up early to go for workouts on days when you really do not want to do anything other than get back under those covers where it’s toasty and warm.

You don’t WANT to quit your job.

You don’t WANT to leave your relationship.

Leaving your relationship sucks. It’s not fun. It means giving up the comfort you’ve had. It means letting go of the safety of knowing that there will always be someone waiting for you when you come home. It means you have to be with yourself, by yourself.

You don’t want these things.

These things are about fixing what’s wrong with yourself and your life, and that’s only going to motivate you as long as you are hating part of yourself. As soon as you start to feel good about yourself, you’re going to let these goals go.

Fuelling yourself based on self-hate looks like temporary boosts of self-assuredness, honest, motivated and temporary activity, bouts of feeling better, and letting go of the project. Then a slow slide back in to self-hate, until the intensity ramps back up sufficient to drive you forward for the next trip on the unhappy-go-round.

You’ll argue with me that I’m wrong. That you really do want to lose 20 pounds. You’ll explain to me why that goal really is something that is motivating for you, and why it’s not about hating yourself. It’s a practice in self-love, you’ll tell me. You’ll create a very convincing argument.

And then you’ll go and create another iteration of the cycle.

I can see it when I sit with you and look deeply into you.

When I look past your words, through your eyes and into your spirit and your heart, I can see that thing you truly want. I feel it.

When there’s nothing left to fix in your life, and you’ve fully allowed yourself to be exactly as you are, you have a goal. A dream that calls your forward. I can see that goal. I can see it hidden in the sparkle of your eyes. I see it when you stop talking about the immediacy of what you need to fix in order to take a breath. I hear it in the pauses of your conversation. I hear it in between your fixing.

It’s not your fault. You came by this honestly. This is how you were raised.

Your resistance to hearing what I’m saying isn’t your fault either. You came by that honestly as well. You “should” be able to do this on your own. It’s ingrained in us societally.

You came by all of this honestly.

It’s not your fault.

When I sit back and look at that part of you, I love you unconditionally. I let myself be present to the glory of you, and I simply love you for who you are.

And when you’re ready to do that — to let go of everything that is wrong about you and needs fixing — you will get present to that part of yourself as well.

When you do that, you and I will create FUCKING MAGIC together.