HAVING A CRAPPY STORY 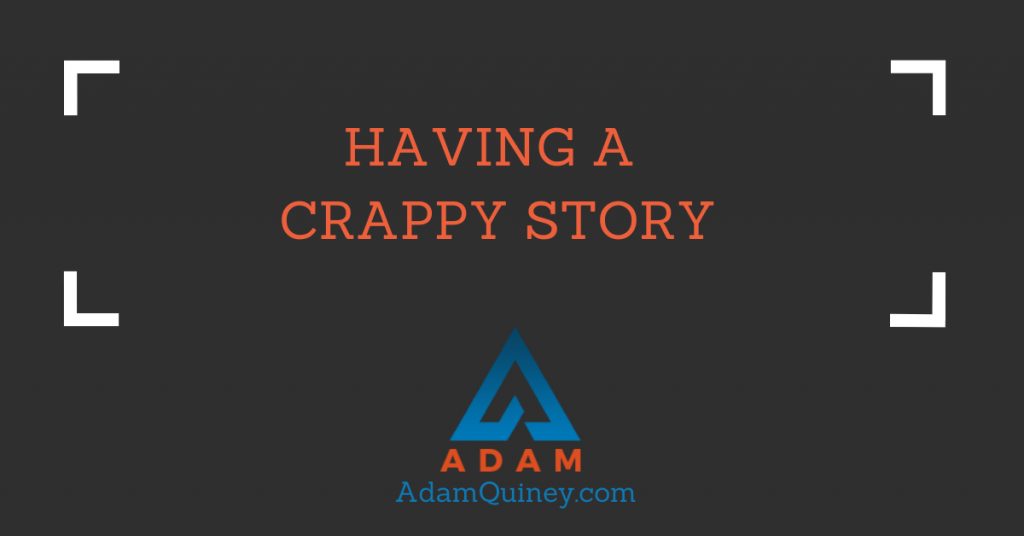 One of the things that separates the being of leader from other ways of showing up in your life is the act of distinguishing.

Let’s illustrate this concept using a really common, really human experience: having a crappy story about yourself.

Everyone has crappy stories about themselves. Even though the various internet memes screaming at you daily will tell you that there’s no benefit to having this crappy story about yourself, the truth is your story does serve you.

Yah, dying, in as much as death is ultimately what we’ve evolved to avoid. These days most of the death we’re avoiding is a spiritual or metaphysical one. We live out our lives in active avoidance of ego death — losing the person we’ve come to assume we are. But enough of that for now.

The upshot of all of this is that there’s nothing special about the crappy voice inside your head. It’s just a fundamental part of being a human, and it’s there because it got us here today (as a species, and as an individual).

The other thing about this internal voice is that it becomes a really interesting internal conversation to have with yourself about why your particular voice says the particular things it says. (“Why is it that my voice says I’m lazy, but other people’s voice says they’re arrogant?”) I say this conversation is interesting, kind of like wondering why ants in Costa Rica cut leaves and carry them everywhere. It’s an interesting line of inquiry, but it won’t really lead you to the transformation you (hopefully) want.

Your voice says the things it says because of who you are. If you can just set that there and leave it, you can move on to a more fruitful line of inquiry — who and how is there to be, about your internal voice, in the practise of leadership?

When confronted by this crappy little voice, most people try to do one of two things.

First, they try to operate over top of it, or in reaction to it. If I have a crappy story that I’m lazy and disorganized, then I’ll get into a bunch of different kinds of action in response. I’m lazy? Well I’m going to train myself to be hyper-productive and super organized.

Down this route, a lot of your life becomes the expression of proving and ensuring that you’re not what your crappy voice says you are. Ironically, the more effort and energy you put into being hyper-productive and organized, the louder the internal story becomes. If you’re willing to trust that your internal story is just that (an internal story), then you can see that trying to prove otherwise is futile.

Sure, you’ll get better and better at being productive and organized, but all of that energy and effort is ultimately about disproving something that is entirely a subjective belief. Like trying to fill a bottomless hole with dirt — there’s never enough, and the more you try, the more your life becomes about the task of trying to fill it.

This becomes the work of a lifetime.

The other approach people take when confronted by their internal voice is to collapse into it. If you have a story that you’re an imposter and don’t have anything of value to share, collapsing into that story would look like you keeping quiet, waiting until you are certain you have something of value to speak into the space and so on.

Most approaches to dealing with your crappy internal voice are some form of these two approaches. For example, if you’re meditating and staring in the mirror, telling yourself “You’re worthy. You’re beautiful. You’re fully capable.”, this is often a reaction to your story. Your story is telling you that you’re worthless, ugly and incapable, and so you look in the mirror and shout the opposite proudly.

This just gives more strength to your story.

This means that they don’t have to respond or react to their story, nor do they have to collapse into or wallow in it.

By distinguishing your crappy story as simply that, you can let it exist entirely separate from the way you act, the way you show up, and the way you move forward from here.

I’m sitting in this classroom, about to lead ten people through some transformative work. And my story is raging away, screaming in my ear, telling me that I’m insignificant, an imposter, have no right to do this work and am pathetic.

I don’t have to do anything about this story, other than recognize it as a story. It doesn’t need to have any bearing on the actions I do or don’t take.

Leaders don’t “overcome” their crappy stories. They don’t do some kind of meditative work, plant medicine ceremony or heavy-lifting to get to the place where they never have doubts ever again. That’s nonsense. That would be akin to transcending your humanity entirely — and that’s just not the game we’re playing here.

Instead, we develop a muscle in noticing our story as it shows up, and distinguishing it as simply a story. The more possibility you live into, the louder your internal story will get.

The leader strengthens their muscle in distinguishing their story, and not letting it stop them.