How Being Called a **** By a Stranger Can Develop Your Leadership 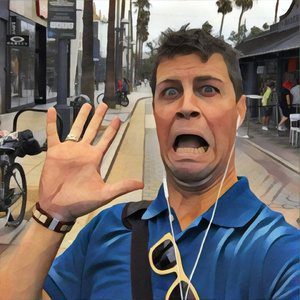 We’d been in our building for a while — almost 9 years at this point.

We were out with our dog Grimby after a morning run, Bay giving Grimby all the time he wanted, and me, probably impatient, wanting to get back home and get on with my day.

He came across the road at us, and shouted “Hey!”

It was weird — because we’ve said “Hi” to him a bunch in the past, but the response has always been cold.

This time there was nothing but heat.

“I don’t appreciate your condescending comments” he started with Bay.

Then he turned to me, and I felt his fire.

I tried to apologize for the impact I’d had on him, but that only added more fuel to the fury.

I saw his right fist raise as he said that, and I felt my hackles raise.

Oh, this was one of those moments.

This is fight or flight.

“Breathe”, I reminded myself.

I had to say that word a few more times before I’m able to follow its advice.

At this point, I’m just letting him spin.

“You’re both condescending c***s, and I’m calling you on it”.

That’s not a word that bounces off you.

That’s a word that plants itself inside you, like a cancer.

There came a point where we stepped away, and so did he, and things wound down.

I rescheduled most of my appointments that day.

And over the next few months, the cancer kept growing.

I had a lot of thoughts.

For six months, I sat with that cancer.

Fighting it, making it wrong, making him wrong.

We’d walk by each other and I just could not figure out a way to get in.

I wanted to leave him a note, talk to him, somehow alleviate the wound that had been opened.

But it felt like everything I did was just going to add fuel to his fire.

Over time, as I continued to do my own work around the wound, my anger left.

He would stomp by me, glaring straight ahead.

And then something shifted in me — a realization I had after an argument with Bay:

I realized, I can be exactly what he had called me.

And in my life, there are times when it’s served me to be that way.

Condescension is a valuable weapon in places like the court room, a tense negotiating fight, a client that simply won’t slow down and hear your advice.

It’s a powerful way to cow people around you in into accepting your leadership.

(Except, that’s not really leadership, is it?)

And this guy had just forcefully pointed out one of my blindspots.

I couldn’t own that I could be this way — that I had this inside of me.

So I let him know.

As he stomped by me in the street, glaring straight ahead, I had just enough time to utter three of the most powerful words in leadership:

My fear came right back. Maybe this would just add to his story about my insincerity.

But the next day he walked up to me, and asked me what I had meant when I had said that.

And as I started to share about what I had been able to see for myself, it created the space for him to do the same.

And he started to share what has been going on for him.

And then the tension was gone, and we were breathing together again.

For the first time in six months.

And I thanked him for the gift he gave me that day.

That day when he threw those words at me.

This is what it means to be a leader and a coach.

To get called something as nasty as that, and to look deep within, past your judgment of the person throwing those words at you, and see what is really there for yourself.

But are you willing to do the work?