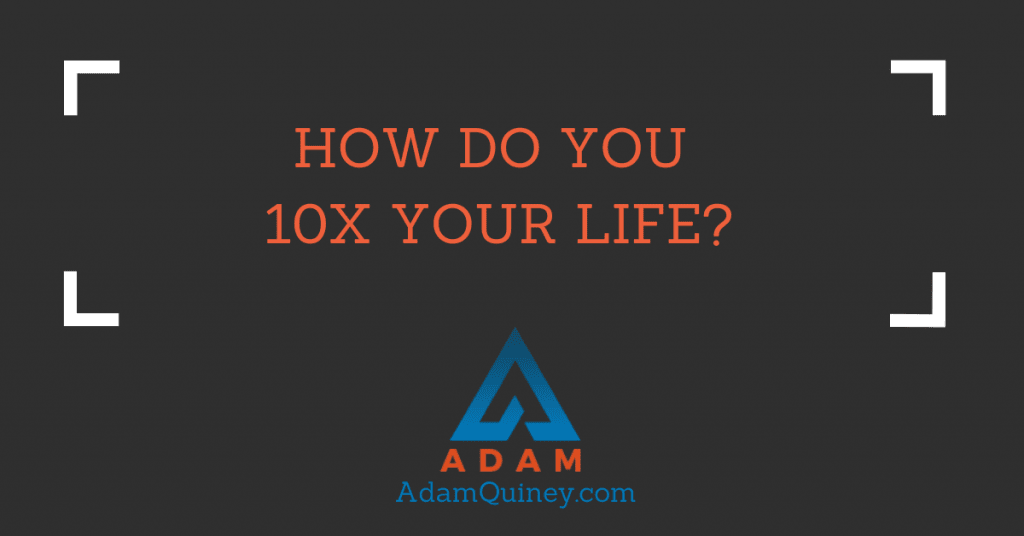 10x’ing your income, life and personality (and your dog, and your clothing, and your jokes, and whatever else) is a popular concept that I think was pioneered by Grant Cardone. At least, when I search for 10x life, Grant Cardone’s advertisement is at the top of the results. Plus he looks rich, and so, according to the Worthington Law, I should listen to what he says (https://www.youtube.com/watch?v=ScJSeUIxydA).

With a sexy marketing verb (10x’ing) behind its back, exponential growth is popular and vogue. Who wouldn’t want to 10x their lives? Like, why not?

We tend to relate to exponential growth the same way we relate to doing push-ups. It might require some effort and energy, but overall we’ll be glad we did it. We might not even enjoy it while we’re doing it, but we can just push through it, and then we’ll be done and we’ll have 10x’ed our pecs.

In practice, this isn’t actually how exponential growth occurs to us. The graph I’ve pasted below shares the real truth of how this kind of growth works, and I want to talk about the experience we usually have while we’re in it. Bonus: this has allowed me to shrewdly force math into your day.

The red, straight line is what linear growth looks like. It’s neat, consistent, and it starts going upwards immediately. Now look at the green curved line — this represents exponential growth.

The portion of this arbitrary graph that runs from January to October(ish) is the reason most of us don’t shift our lives in transformational ways. During this period of time, not only are we doing what feels like push-ups, but we’re seeing the opposite of the kind of results the rest of the world sees. We aren’t feeling an increase in our growth, we feel stagnant. Meanwhile, the rest of the world (which generally progresses linearly) is moving ahead at a steady pace.

And even worse, at the start of any deep work, you may not even be aware of a lot of the stuff you’re moving out of the way. In theory, you’re sitting in that part of the curve underneath linear growth and you’re thinking “Well, this is okay, because at least I’m doing this so I can get to the sexy upward-shooting part of my growth”.

But that’s not really how it occurs in the moment. How it occurs is that everyone else seems to be progressing, and you’re sitting stagnant. Because transformation is often, by definition, outside of what we can perceive in the moment, we’re not just left thinking “Wow, everyone else is growing but I’m doing my work and will soon overtake them”. Instead, we’re left in the experience that everyone else is growing, and we’re fucking around and soon to find ourselves homeless.

We get afraid we’ll be left behind, and we see all of the costs associated with investing in something that provides the capacity for exponential growth. And eventually, we conclude, “Hey, maybe it’s not too late to jump over to that nice consistent red curve”.

Because of the sex-appeal of 10x’ing yourself, people tend to try starting off on this green curve, but then become discouraged and jump back out onto the red curve of safe consistent linear growth. Then, after a few years, they get re-inspired, and make the leap again. All that does is ensure stay stuck in this early part of exponential growth.

A friend I hadn’t talked to in five years or so came to me recently, and shared how he really wants this experience of a 10x’d life, and it seemed like I had created that. How do you make that happen?

The answer is that you start today (since there’s no other time to start). What worked for me was that I hired a coach, and committed to working with someone in this capacity for the rest of my life — as a non-negotiable. The coaches I’ve worked with have increased in skill, as well as the financial investment required — but at every step, the investment felt edgy, and throughout, I often feel like I’m starting fresh at the point in January when these two graphs begin.

Coaching doesn’t have to be the vehicle you choose. There are many paths that will support you to go deeper and further than you can go yourself.

The work is choosing to start. Today, rather than tomorrow.

And then staying committed.

So… how much longer will you wait?