HOW TO AVOID AVOIDING WHAT’S SCARY 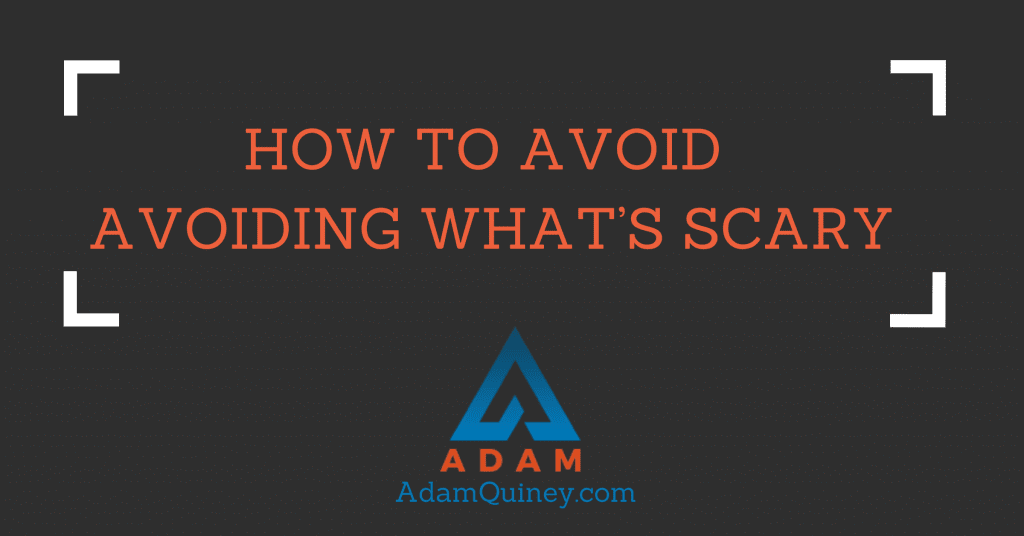 There are two main ways to protect yourself from what you fear/dislike/avoid/resist.

The first way is to outright avoid it. If I don’t like feeling selfish, then I’ve got a bunch of good strategies to manage that. I can make sure I always give away the last piece of cake, generously offer my time to other people, avoid situations where I might have to make a decision that would be considered selfish, etc.

These are all variations to avoid confrontation with the experience of being selfish (or seen that way by others).

The second strategy to protect ourselves from what we fear/dislike/avoid/resist is more paradoxical. That approach is to run headfirst into the thing.

If you are afraid of getting told “No”, then the strategy becomes to force yourself to get some Nos. This approach is a little like aversion therapy.

The idea is that if you force yourself to confront what you are afraid of, you will eventually become less afraid of it.

This is a problem for your ego. Your ego has a job to do, and that is to protect you from having to come into contact with what you are afraid of.

The ego’s solution is to let you get away with this /insane/ practice of collecting Nos, but do so in ways that are safe.

So the approach then looks something like making big giant requests you already know you’re going to get a No for, and then accepting the No when people give it to you.

This is a little like putting your finger on the scales. Like adolescents wrapping themselves in the outfit of their counter-culture, and then using that as a shield against the rejection they feel when people don’t accept them (“They just can’t cope with my style and face make-up, it’s not me they’re rejecting”).

You don’t actually build up a tolerance to being rejected for doing what you care about. You develop a tolerance for doing things you don’t expect people to accept in the first place, and then having things work out accordingly.

The other approach is to collect rejection doing something that is adjacent to what really matters to you. So, if your heart’s desire is to be an artist, but you’re terrified of trying to sell your art to someone else, you get a job selling other people’s art at a gallery.

The thinking is that if you’re scared of selling your own art, then a good way to practise is to start with other people’s art. You’ll learn the nuts and bolts of selling, and then you can just slide that over to your own art.

There’s going to be some benefit to this, as you learn the doing of selling, but in terms of confronting what you are afraid to face, you never get any closer. You’re not scared of being rejected selling other people’s art. You’re scared of it happening with your own art.

All of your practise simply provides the illusion of moving you closer, without actually having you cross the threshold that drives up your fear.

There’s nothing wrong with either of these approaches — they’re just distinct from the practise of confronting the thing you’re really afraid of.

The best practice is usually to drop the fancy stuff, and go simple. Just do the thing you’re scared to do, without any acrobatics to try and diminish the fear.

Partner with your fear, and take the action that scares you.