How to Escape Reality 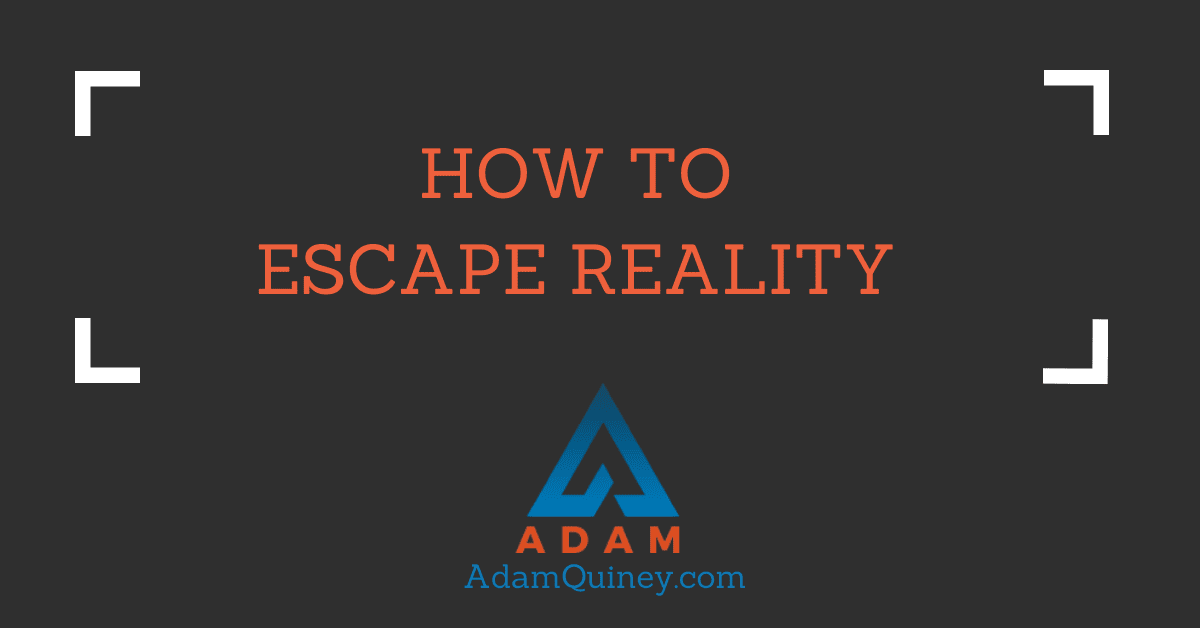 In the late 90s movie, The Truman Show, Jim Carrey plays a character who has been adopted and raised, since birth, by a corporation. (Never mind the ethics of this, which is one heck of a doozy) The titular character, Truman Burbank, has lived his whole life inside a fabricated reality. Every aspect of his life, from the sky above his head, all the way down to the neighbours he lives and connects with on a daily basis, is spurious — it’s made up.

Truman’s entire reality is constructed, heavily monitored and then broadcast to the public at large, so that the rest of the world (outside of the “Truman World”) can watch his life as it unfolds. Now that’s some good TV.

Truman goes about his life oblivious to all of it. He has interactions and conversations with neighbours, he seeks out jobs and new work, and he aims to find love. Consequently, Truman’s experience of life is both real and phony. It’s real in as much as the conversations and interactions he has with people are genuine (they’re real people, and they’re responding to him spontaneously, rather than from a script).

Truman’s experience of life is phony in the sense that every interaction he has exists with an underlying agenda. People in his home town are always steering him towards staying in that particular town (because it would be a logistical nightmare to have to build an entire new studio set for his journey to a new city). All of Truman’s conversations are tainted by the fact that there is an agenda: the show must go on.

Even though the interaction themselves have the veneer of reality to them, they’re all tainted by that agenda. Ultimately, things can only ever get so “real” because the underlying fabric of Truman’s reality is that it’s made up. You can never go from a made-up reality into a truly genuine experience, because what makes something truly genuine is the lack of pretense — the spontaneity in the moment. (There’s some nuance here that we’re stepping over, but that’s okay because otherwise we start to get a little lost in the weeds).

Our ego has constructed a similar world for us. From birth, it’s been slowly learning about the world around us, and then creating beliefs, ways of acting, and an environment around us that is a reflection of those beliefs and actions. By and large, our world is a reflection of how we think. Just like Truman, there are interruptions throughout your daily life that point to a different kind of experience, but, again, just like Truman, you don’t tend to think “Wow, there’s proof that my entire reality is subjective and made up”. There’s simply no room in our thinking for that possibility.

Inside his world, Truman could spend a lot of his life trying to develop himself and get better at connecting with people, and he’s going to make some progress. But all of that progress is still inside the façade that has been constructed for him. Truman could devote his entire life to creating breakthroughs in authenticity, and it’s only ever going to get him so far, because there is only so much authenticity the world around him allows for.

When we try and create transformation on our own, we run into the same problem. We simply cannot see the boundaries of the reality our ego has created for us, because that’s not the way our ego works. We don’t walk around with giant gaping blindspots in our perception of reality — for the most part, we perceive reality as consistent with our beliefs. (For a really simple heuristic, notice the discrepancy between how many people are upset at the hypocrisy of others, versus how many people are actively owning their own hypocrisy.)

Just like Truman trying his hardest to have a breakthrough in connection by talking to the people in his contained world, we tend to try and practise inside the domain of what our ego has laid out for us.

Truman was lucky — the corporate effort to keep him in the dark (and win the award for the greatest ethical violation in corporate broadcasting history) was run by humans, and humans are fallible. At times, stage lights fell from the sky onto the ground (a pretty big indication that something isn’t right), and at other times, actors in his fabricated reality genuinely fell in love with him and tried to tell him the truth of his existence before they were swept out of his life forever by the corporation. These errors provided hints to Truman that there was something not quite right with the reality he lived in, and inspired him to try and break out.

Bad news: your ego is a lot better at its job that a corporation, and it doesn’t have to worry about ethics violations. The way we perceive reality is constantly being bent to fit into the model our ego is currently working with. And while Truman managed to literally break through the wall of the studio and leave behind his fabricated life (and presumably the corporation that was running everything), our ego levels up along with us.

What this means is that yesterday’s breakthrough is today’s new fabricated reality. You’ll break through the wall of the studio, and your ego will then create a new, larger simulated reality for you.

This seems like a good place to put some bullet points that will be used to make some important points. BRING ON THE IMPORTANT POINTS!

Truman’s escape from simulated reality required an enormous amount of courage. Toward the end, everything in his reality was working against him to keep him from boarding a boat and sailing off into the unknown. He had every right to honour his fear and turn back — to listen to what the world around him was telling him, and return to safety.

Your journey is no different, and you’ll have the same experience as you get closer and closer to a breakthrough. More and more evidence will pile up around you inviting (then imploring, then SCREAMING AT YOU) to turn back. It requires a lot of courage to break through our current reality, and it’s not for the faint of heart.

Be gentle with yourself, and remember, there’s no rush. When you’re ready, your boat is waiting for you.