HOW TO FREE YOURSELF AND THE WORLD 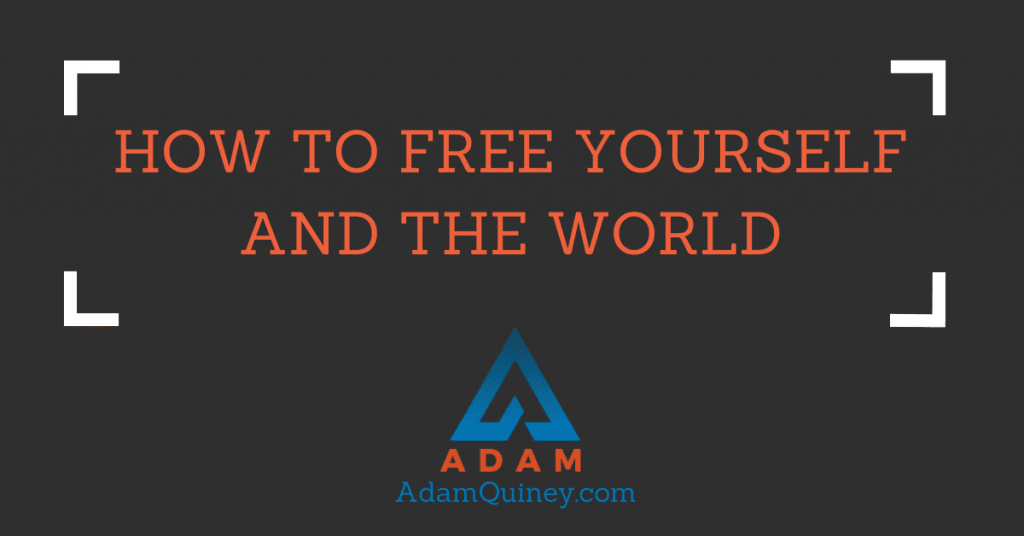 Sitting in a courtyard, you notice someone across the way. We’ll call him Frank. Frank is muscular, tattooed, wears a backwards hat and is dressed in a way that shows off his physique. Before Frank has said anything to you, you’ve concluded that he’s aggressive. Frank probably isn’t the kind of people you would choose to spend time with.

In fact, you notice a pull in your own energy away from Frank. You’re forty feet away from Frank and yet you want to avoid him. He doesn’t seem like your kind of people, and while you’ve been making an effort lately to connect with more people, it’s almost like your gaze willfully slides over Frank. Convenient.

You’ve got enough wherewithal to notice this as it’s happening, and so you take the scary step and push forward to introduce yourself to Frank. Up close, you can’t really /distinguish/ what’s going on beneath how you feel. You’re mostly just present to the feeling itself.

Up close, Frank feels even more aggressive. You feel a little constricted in your stomach and chest, and as you speak, a hand inadvertently goes up to your face, protecting you subtly. You stand with your feet a little to the side, so that you don’t face Frank face-on, instead presenting him with just a little bit the side of your body, kind of like angling yourself so that you can stand a little more easily in a strong wind.

You introduce yourself to Frank, and he smiles back to you and introduces himself. His smile doesn’t feel fake, but it does feel lacking in warmth. His gaze has an unblinking quality to it. Frank is all forcefulness. There’s little softness present. Little gentleness.

As Frank starts to speak, he leaves little room for pauses. He’s asking you questions about yourself, and he seems genuinely interested in your answers, but your experience is less like someone is getting to know you and more like you’re being grilled in a police interview.

As this is happening, you feel two different kinds of energy rising up inside of you. On the one hand, you want to end the conversation as quickly as possible, so that you don’t have to feel subjected to this forcefulness. Standing in the middle of a hurricane is uncomfortable — you’d rather be someone else.

At the same time, you feel the reciprocal to that energy: a desire to respond with your own forcefulness. To speak over Frank, to interrupt him and to eliminate your own pauses so that you can get what you have to say in without being interrupted.

Eventually you end the conversation and go back to your seat, relieved that that experience is over. You don’t think you’ll be seeking Frank out to talk more — it’s just too much.

This is where most of the world ends its interaction with Frank.

What we can’t see is that the experience you had with Frank is the same experience everyone has with Frank. Everywhere Frank goes, the current shape of his energy is projected outwards and creates a similar impact to people.

What we are unable to see is that at Frank’s heart lies an ocean of tender gentleness.

And so Frank learned that if he simply showed up as his tender self, he was going to get hurt. In the brilliance of his youth, Frank unconsciously put together strategies and patterns that mimicked those of the people around him, and ensured that his tenderness was kept safe.

Frank’s energy, and its impact, has consequences (both good and bad). From his aggression, it’s rare that people take advantage of Frank, or mistake him for someone that can be pushed around, and consequently, Frank experiences life somewhat safe from that kind of violence.

Frank’s tenderness is held safe and contained, largely invisible to the rest of the world. Frank never has to be with the vulnerability caused by his own tenderness. And yet, all of that protection simultaneously ensures that he’s never seen for the tender, gentle, loving heart that he truly is.

Frank isn’t unique or special. All of us have some version of Frank’s inner and outer tension.

It’s human to be repulsed by the armour we’re presented with. We don’t need to hold ourselves with judgment when we act consistent with that part of our humanity.

But, the transformational path — the path of the spiritual devotee — is to look below the armour and our initial experience and reaction, and instead seek out the tenderness that lies beneath.

And once we can see that tenderness, we choose to relate to the person from that place, rather than from their armour.

As we do that, we and Frank both, are given the gift of seeing someone as they truly are, and the vulnerability of allowing them to see us in the same way.

This is what will free the world.