How to Lead When You’re Literally On Fire 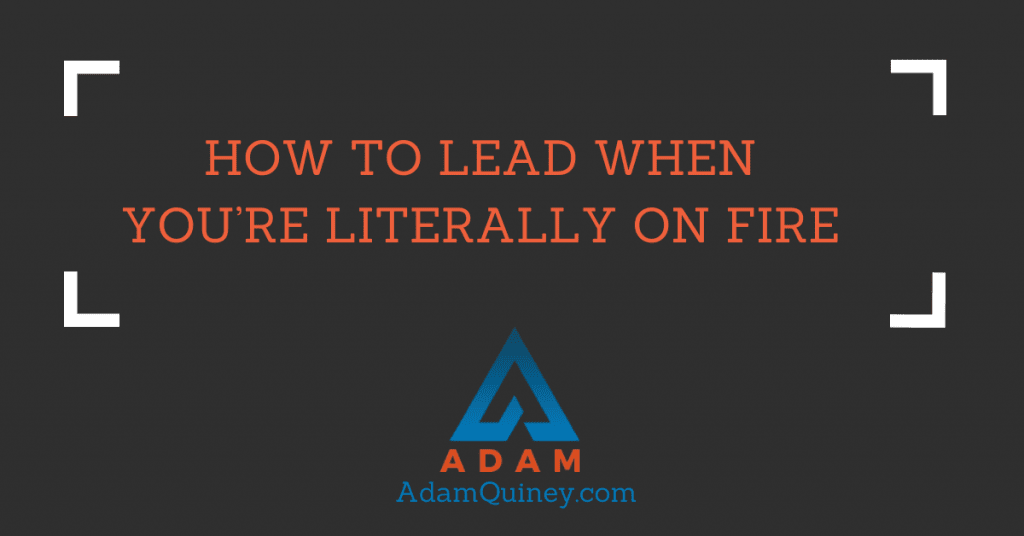 Jonathan nodded and turned to the rest of the room.

“Everyone, I’d like to hear from each of you what the impact is of who Jackie is being, in this moment. Who will share first?”
Jonathan sat quietly waiting until Harwant spoke up.

“Well, I think she needs to loosen up a bit about the kind of questions that,” Jackie visibly bristled, but before Harwant could get any further, Jonathan interrupted.

“Thanks for going first Harwant. I want to be really clear about what I’m asking you to share. We’re not interested in what anyone thinks Jackie needs to do. That’s her job. This is just about her getting present to the impact of her being. What is the impact of how she is being, right here, right now.”
Harwant scrunched his forehead and thought for a bit.

“Okay, well, I’m not sure if I’m getting this quite right, but the first thing is that I’m kind of afraid. And I feel like I did something wrong, but I don’t know what I did wrong because I just asked the same question that I would ask Fiona or Dennis. And in fact do, many times. So then…” Harwant paused and thought. “So then, from there, I’m left kind of tiptoeing around Jackie. Like, I guess I’ll just hope she’s going to get it right, and I’ll avoid looking at her for the rest of the conversation.”

“Great work Harwant — that’s exactly what we’re looking for. Thanks for playing. Who’s next?” Jonathan asked.

Dennis spoke up. “I just get tired from this place. I basically feel like Jackie’s unwilling to play on a team with us, and we have to use special kid gloves with her that we don’t with anyone else. Like, I thought we were here to be powerful with each other, and ask bold questions. The way Jackie is showing up, in this moment, makes me feel like maybe this isn’t the game that she’s here to play.”

Jackie interrupted, “That’s not fair! I’ve been biting my tongue with each of you, holding back so that I don’t hurt you, and…” Jonathan interrupted her.

“Jackie, you had a chance to speak, and elected not to. No one on your team is saying that they don’t want to play with you. In fact, they’re sharing the things they are sharing because they are committed. to leading with you. This isn’t about making you wrong — this is about you getting present to the impact you are having when you show up the way you are now. I understand this is challenging, but if you’re not willing to get present to your impact, you’re going to be left continually blind to it, and powerless to do anything about it.”

Jonathan paused to check in with Jackie visually before continuing.

Jonathan turned to Fiona, smiled, and raised his eyebrows expectantly. Fiona cleared her throat and spoke up.

“Well, I feel like I have to be quiet to be the counter to Jackie’s loudness. Like, Jackie gets so angry and frustrated, it feels like I need to take up less space.” At Fiona’s comment, Jackie visibly crossed her arms, then caught herself and unfolded her arms with a scowl, then unscowled her face, before settling back into crossing her arms.

Fiona continued, “I feel like, as a woman, I have to pick up the other end of the rope and be the quiet, dignified, nice one, when Jackie is being like this. And never mind anything related to being a woman, I just feel like I need to be agreeable and go along with whatever is being said, because Jackie is being so disagreeable.”

Jackie was staring in disbelief at Jonathan, clearly waiting for her turn to talk. Jonathan turned to her.

“Alright Jackie, that’s the impact you’re having, based on how you’re being right now. What would you like to say?”

Jackie could barely contain herself. “Well, first of all, that’s Fiona’s problem right there. She always keeps herself small, and is never willing to show up. She’s lucky she’s got me here as a scapegoat, because otherwise, her stuff would be glaringly obvious. Harwant tiptoes around everyone, because he wants everyone to like him, and Dennis is always making everything a joke so that he feels better.”

Jackie paused and took a breath. Jonathan waited to see if there was more for her to say, while keeping an eye on the rest of the room. So far, everyone else was doing fairly well, despite Jackie taking fire at them. Jackie continued.

“Harwant asked that question because he’s got an agenda for me. That wasn’t an innocent question — he never trusts my estimates, and he’s just not willing to own what he thinks about what I said.”

Jackie came to silence and stared at Jonathan.

Jonathan nodded. “Thank you Jackie. Before we go further, I want to thank everyone for your candour. This is the part that gets most teams stuck. Rather than get this on the table, and then be supported to really address it, they operate over top of it, hoping that these sorts of issues will go away on their own.

They don’t — instead, they fester, building resentment and create toxicity on the teams. This conversation has been a long while coming for this team, so we’ll have a lot to work through. Don’t be discouraged. The good news is that we’re going to be building your muscles in this area, and as time passes, you’ll get better, and faster and addressing this kind of friction before it builds up to where it currently is.”
Jonathan paused and addressed Jackie.

“Jackie, thank you for sharing all of that. I have a few things for you. First, I hear what you’re saying about your teammates, and I’m going to trust that they do as well. I don’t know if that’s true yet, because I’m the newcomer here. But I can tell you that I’ve never met a team that had dysfunction that wasn’t contributed to by everyone on that team. So regardless of what you’re pointing to over there with these people, I have no doubt that they too will have a turn in your position right now.”

“Second, whether or not what you said is true, the thing that is glaring in this moment is who you’re being.” Jonathan turned and spoke to everyone at the table. “I want you all to really get this — who you’re being is louder than anything you could say. Think of it like someone who’s literally on fire, pointing to how you don’t take care of yourself. It’s going to be pretty hard to hear them, right?”

“So Jackie, right now, you’re the one on fire. It’s not that what you’ve got to say isn’t accurate. It’s that who you’re being is louder than anything you could say. Until you’re willing and able to be responsible for your being, and get yourself back to the powerhouse I’ve witnessed here this morning, there’s not much other impact you can make.”

Jonathan checked in with Jackie. “Is this making sense?”

Jackie responded. “I think so. But so… what, it’s just all my fault and my job and I have to do all the work here?”

Jonathan smiled. “Well… It’s no one’s fault, but it is your responsibility. It’s your responsibility because it’s your being.
As leaders, everyone on this team is going to be practising getting more and more responsible for their lives and their impact. Right now, I notice you’re in this conversation like you’re to blame, and like you’re only this way because your teammates are the way they are. And from that place, you’re unable to take responsibility for your impact, which leaves you powerless and ineffective as a leader. This way of being that’s got you right now is using you, rather than you using it.”

“And so, it’s not that you have to do all the work here. Rather, it’s that you have a choice. You can insist that it’s not your responsibility and not address what’s going on for you. Or, the other choice is that you get responsible for how you’re being and the impact it’s having, and get supported to work it out. I want to be really clear with you: you don’t have to take either of those choices. Both of them are fine choices.”

Jonathan paused to make sure Jackie was following. Jackie nodded her head slowly and Jonathan continued.

“With the first choice, you insist it’s not your responsibility, not your fault, and you’re not going to be the one to do all the work. Given the impact your being is having, I would imagine that the consequence of that path is that your team continue to tiptoe around you, you continue to feel resentful, and eventually, the team moves past you. If you aren’t able to take ownership for how you’re showing up, over time, I anticipate you’ll be left behind. With the second choice, you do have to be the one to address your being, but part of the consequence of that choice is that you become better able to lead in the face of whatever is showing up, and in the future, you’ll better be able to develop the leadership of other people when they find themselves in this same place.”

As Jonathan was talking, Jackie had visibly softened.
“Okay, I think I get it. So, I’d like to not get stopped here, but I’m also a little stuck because I really can see the things I pointed to. Do I just magically not think them?”

“I can definitely relate to that part,” Jonathan shared. “So no, you don’t have to magically not think something Jackie, but at least for now, you’ll need to set them aside. Again, the person that is literally on fire is probably right about what they’re pointing to, but it doesn’t matter until they get themselves sorted out. So, first question: are you clear on the impact who you’re being is having?”

Jackie took a deep breath before responding. This was clearly an effort for her.

“Yes, I get it. The team kind of gives up on me, Fiona feels like she has to compensate, and no one said this, but it often feels to me like the conversation grinds to a halt and gets super awkward.”

Jackie paused and thought for a second before continuing.
“And actually, the impact on me is that I sit and fume and feel resentful. I feel resentful towards everyone here, but also towards myself. I get really upset with the fact that I can’t let this stuff go.”

“Jackie is doing some really great work here, everyone, and I want you to get how challenging this is. Jackie is modelling what it will take whenever any of you is taken out. Make sure you’re listening and watching for yourself. Get present to what will be required for you when you’re the one whose being is in the space.”