How to Use Responsibility to be Irresponsible 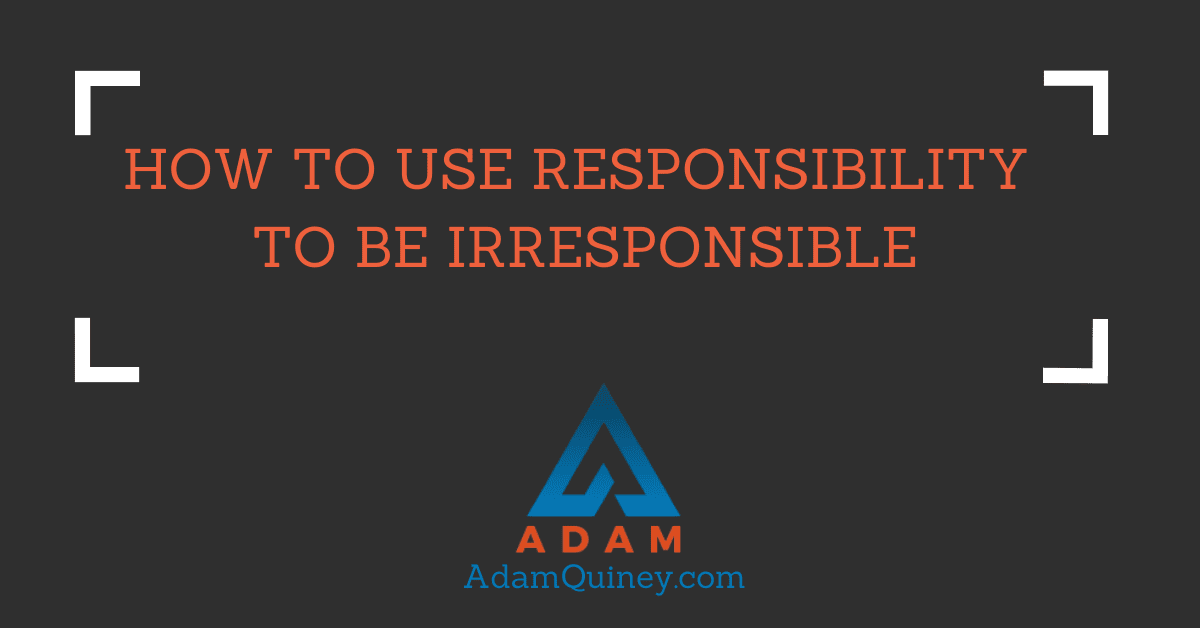 Prongle was talking… quite a bit.

Jonathan looked around the room and noticed that the other people had checked out. Cynthia, who seemed to have pushed a button with Prongle, was leafing through the papers in front of her.

“Prongle, can I interrupt you?”

Prongle stopped talking and blinked, almost like he was coming out of a daze.

Jonathan nodded. “Great, thank you. So, what are you trying to say right now?”

“Well, Cynthia is fine, and she didn’t do anything wrong, but I felt like she talked over me, and I’m alright with that, and it doesn’t really matter that much to me, but I think there’s a dynamic on our team like this, and we just seem to miss the mark when we do this. So, anyhow…”

“Okay, got it. So, it sounds like Cynthia did something, and it kind of hurt you a bit — like it might have triggered you. Is that fair?”

“Well, I don’t think I’m really hurt here. I know it’s okay, and I know how Cynthia shows up is not really any of my business and she’s just doing her thing and my job is to be okay with that, which I am.”

Jonathan had seen this before — teams that had gotten some coaching or leadership training, and were now tripping over themselves trying to apply leadership over top of whatever was actually in the space. Jonathan needed to address this or there wouldn’t be any real change — just the veneer of leadership painted over top of a bunch of dysfunction.

Jonathan was aware of two things: first, Prongle was upset, and second, Prongle wasn’t really able to acknowledge his own upset. Instead, Prongle was talking around his upset and trying to convince himself and the rest of the room that he shouldn’t be upset. If Jonathan was going to point to this blindspot, he knew Prongle would be a little sensitive, and so wanted to make sure he took care as he did so.

“Okay, I appreciate you sharing that Prongle, and letting me interrupt you. I see some really important work for the team here, and I’d like to do some work with you, in service of everyone. Would you be alright with that?”

“Great. Thank you. So first of all, I want to acknowledge you for your commitment to be responsible here. I really get in your speaking that you’re committed to transformation, and to being a leader that doesn’t just get bogged down in resentment or feelings.”

Jonathan wasn’t fluffing Prongle’s feathers — he really did see this commitment. Jonathan was simply acknowledging what he was present to. As he did so, Prongle visibly relaxed and took a breath. Jonathan continued.

“Here’s the thing I notice: in spite of your commitment to be transformed and to not get caught up in resentment, the truth is, Cynthia actually hurt you. She didn’t do it intentionally, but that doesn’t matter. The person behind me at the grocery doesn’t intentionally hit me in the heels with their shopping cart, but it still hurts me.”

Prongle jumped in. “Right, but, if it’s not her fault, then I should be the one to get over it, right?”

“Well, let’s slow down a bit. I think this is part of the problem — before we get really present to what is so, we’re jumping to what needs to be done or who you should be about it.”

Jonathan looked around the room to make sure everyone was with him. He had everyone’s eyes on him, so continued.

“So, here’s what I notice is so: you, Prongle, are hurt. And, rather than starting by owning that you’re hurt and maybe a little upset, you’re trying to convince yourself that you’re not. The way you’re doing that is by talking at length about how it’s okay, and it’s not an issue, and you know Cynthia is not doing it intentionally, and all this other stuff. But the truth of the matter is that, underneath all of the words you’re using, what’s real for you is that you’re upset.”

Jonathan connected with the four members of the team he was working with.

“This is the most important point here everyone. You can’t move past something that you’re not willing to sit with. This is something I’ve noticed everywhere on this team. A lot of trying to convince yourselves that you’re not experiencing something, while simultaneously experiencing it. Basically painting a layer of “It’s Okay-ness” over top of whatever is real for you. The impact of this is that you can’t actually address what’s really there.”

“Is this making sense Prongle?”

“Well, kind of. I’m not saying that we want you to just stay mad and upset. Leadership isn’t about being resentful. But, there’s a distinction between being upset, and acknowledging that that is the case so you can then do something about it, and being upset and then trying to explain or convince everyone why you’re not upset.”

Jonathan took a sip of water and continued his point.

This last point needed to be poignant, so Jonathan paused and reiterated.

“What I mean by that is, if you’re actively explaining why you don’t need to feel a certain way, even though you do, then you’re not actually being responsible. Being responsible begins by accepting what is.”

Jonathan turned back to Prongle.

“So, Prongle, I’ve got an assertion. You’re hurt and/or upset by something that happened. Would you be willing to try that assertion on and see if it fits?”

Prongle took a breath. It was like he was energetically surrendering to something.

Cynthia moved to spoke, but Jonathan stopped her.

“Hold on Cynthia — I get that you want to respond to that, and we’ll have a chance to actually dive into this, but for now, can you just let Prongle own what is there for him, without making it mean anything about you.”

Cynthia frowned and took a breath, then nodded her head. Jonathan made a mental note that he would need to come back to her.

“Okay, great Prongle! Before we go any further, I want to honour you for simply owning your truth in the moment. I really get that this is the edgy work for you. And what I want you to know is that by acknowledging what is real for you, you’re actually being more responsible, rather than less. Now that you’re owning how you feel, we can actually do something about it.”