How you do one thing is not how you do everything 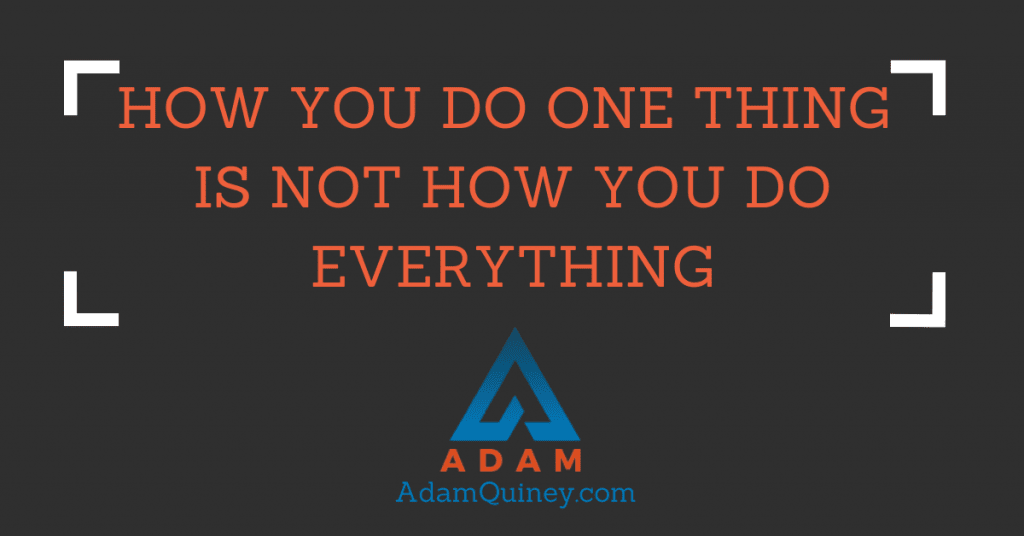 Kind of like how we have a saying that the squeaky wheel gets the grease, but we also say the nail that sticks out is the one that gets hit with the hammer. Both of these sayings are nice and pithy, how is it that they are contradicting!?

If you pride yourself on admitting that you “don’t know” and waiting until you get an answer before preceding, I’m pretty sure we could also find areas of your life when you are headstrong and certain you have the right answer, and unwilling to listen to the opinions of others. (Yah, you might “listen” to them, in the sense that you hear them out, but it’s not actually going to make a difference, since you already know you have the right answer).

Your being lies underneath what you do. It’s pervasive and ubiquitous.

Imagine that who you’re being is the expression of “I might not be generous enough”.

From this concern, in some areas of your life you’re almost certainly going to be incredibly generous — almost like a reaction to that underlying fear. You’ll probably give far more than most people, go out of your way to be generous. You might be the kind of person that people say would never even think themselves before offering a helping hand. At times, it’s even predictable that you would be a bit of a doormat.

And in other areas of your life, you’re predictably going to be selfish, having given and given and given and concluded that no matter how much you give, it’s never sufficiently reciprocated. And so, in these particular areas you concluded, “Screw it. Here? Here, is where I’m going to get mine.” You’ll snatch selfishly, and then justify this way of being by the incredible generosity you’ve demonstrated in the other areas of your life.

Even though the doing is almost the opposite in these two instances, they’re both a reflection of the same underlying way of being: the fear that you might not be generous enough.

This is why attempts to create change in our life, simply be adjusting what we do, create short-term, surface-level change, but no lasting transformation. You can change what you’re doing, without actually impacting your being.

The caveat to all of this is that there are going to be some circumstances and situations in your life that don’t trigger that particular fear about being selfish, and so we’re not going to see it expressed in the way you show up. Oh well, I guess pithy sayings can’t be relied on all the time.

That being said, if we can let go of the need for it to be an absolute truth, there’s power to be had looking through the lens of “Who I be in one area of my life, is who I be in all of it.”