How You Learned to Dim Your Light 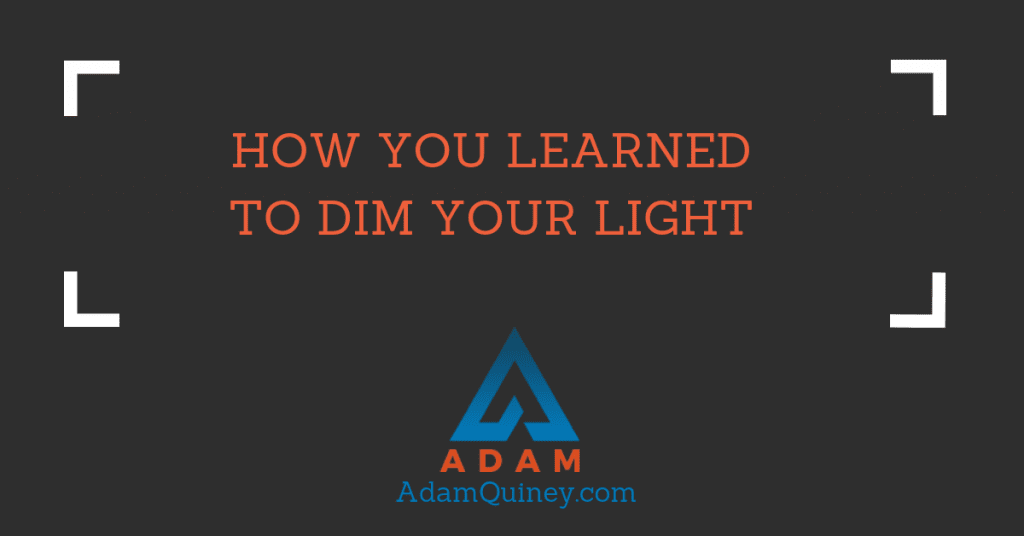 Imagine someone named Percival. As an example, we’ll work with one example of Percival’s being: his Presence (including its shadows, Obnoxious and Invisible).

In the beginning, Percival is a beautiful, innocent, new child. He has only his light, and has not yet learned that the world is unsafe, scary, or that there is anything to be afraid of.

He hasn’t been told it is wrong to do certain things, right to do other things, and is blissfully unaware of the social rules that dictate how our society operates and how he should behave.

Percival is simply fully-expressed. (Spend time around toddlers, and you will see what I mean immediately. Babies do not wonder if it’s okay to express how they are feeling. They simply be).

Someone with the gift of Presence naturally illuminates a room, and casts a lot of light. They get noticed by people, even as a little child, and thrive in the attention that comes their way. We want to look at people with Presence, and people with Presence want to be looked at. Those with this gift are born to be on stages, speaking to audiences, and on television.

Almost immediately, Percival begins to get feedback from the world, about his being (including his Presence). His parents lovingly want to help him grow to become the best man he can be, so they train him the same way they were trained by their parents, including the stories about the gift of Presence.

Percival often gets told to stop showing off, and that he’s being too much, especially in situations where his parents have learned it’s not okay to own their own Presence. In classes with teachers who don’t know how to be with Percival’s presence, he is often told to be quiet. Because of this feedback, he learns it’s better to under-express himself and tries to be invisible.

As Percival ages, he becomes better and better at keeping himself hidden, while maintaining a craving to take up the spotlight and shine his magic into the world. He is left almost schizophrenic about his gift. He simultaneously wants to perform and be seen by the world, and also holds a (now-internalized) belief that this desire is wrong.

Percival is at times experienced like an elephant hiding behind a blade of grass. He is a magnificent presence in the room, and yet tries to keep himself hidden. People experience this incongruity, but also don’t know what to do with it, and so they simply look past him (on some level, we can all feel each other’s fear, and the safest thing to do in these situations is pretend it’s not there and ignore it. Basically not talking about the elephant in the room).

Because of the spaces where Percival keeps himself hidden, he also over-compensates by taking up space, often in indirect and covert ways so that he can get away with doing something that his internal story tells him he is wrong.

When given a microphone to make a speech, he predictably takes way too long with it, relishing the spotlight and not wanting to relinquish it. When it is time to acknowledge his team, he does so, but often makes the acknowledgment about himself so that he can meet the void caused by his under-expression.

These strategies of Percival’s tend to be pretty obnoxious, and when he is acting them out, people check out and try to get away from him. His tendency to suck all of the air out of the room has people ignore him and go and find something more interesting. And tragically, this reaction then has Percival try all the harder to simultaneously keep himself from being too much and desperately grasping for the spotlight when he gets it.

We can keep drawing out an infinite number of scenarios that may play out in Percival’s life. He may find ways to express his Presence indirectly, such as becoming a TV producer where he puts his skills to work in making sure other people’s Presence shines through, while remaining behind the camera himself. Or maybe he simply resigns himself to the fact that people are going to experience him as obnoxious and that’s just the way it’s going to be.

The point is less about the specifics and more about the fact that there is some predictability to the way it will go with your shadows. However your own shadows express themselves, and however your life currently looks, there is power in noticing the places where you are under- and over-expressing the gifts that you are, so that you can then choose whether or not to continue doing so. It is not a bad thing to operate from your shadows. It’s simply that they tend to be unconscious and automatic, which then eliminates our ability to be at choice in our lives.