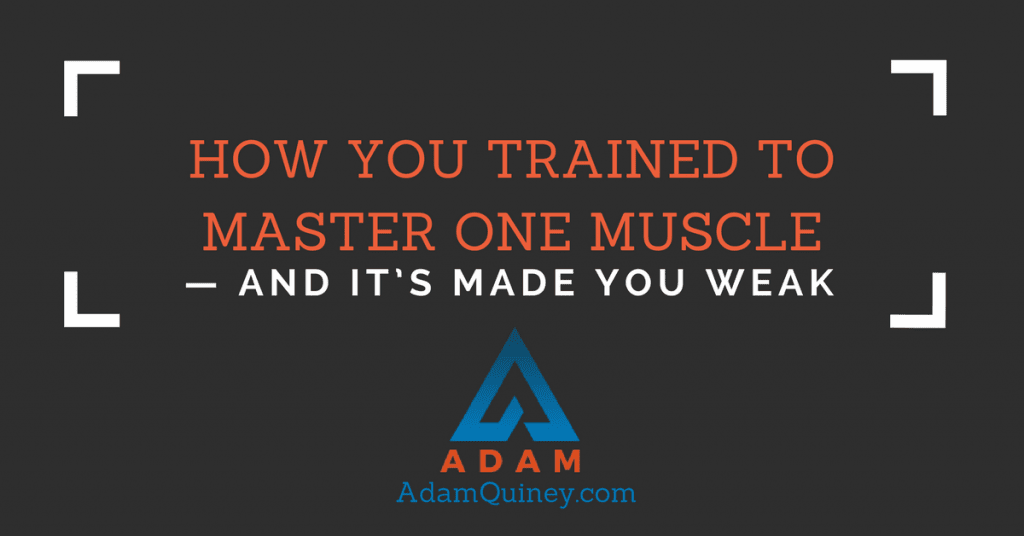 Imagine a boy who is told that the only muscle in his arm worth worrying about was his bicep. His parents felt that bicep growth was important, so they worked hard to instil this work ethic in the young boy.

They shared stories about how people with large biceps had saved other people from injuries (by lifting carts off them, etc.), and they would ask him often if he’d done his arm curls that day.

When the boy would be using a different part of his arms (say, his triceps), the parents would say “Hey, make sure you put in some work on your biceps”. The child would dutifully look at the problem anew, and figure out how he could solve it using his biceps. This boy was committed to being a good, strong worker, and so he listened to his parents.

His good bicep-workout-ethic has grown into something more. He’s got amazing biceps — some of the best biceps in the world. In fact, he’s actually won some competitions. People often compliment him on how powerful his biceps are.

But he’s forgotten that he has any other muscles in his arm. Look at this guy’s life: every problem that he comes across, he looks at it with the question in his mind: “How can I solve this using my biceps?”.

That question has become so commonplace that he doesn’t even realize that he asks it any more — it’s just embedded in his subconscious. It’s invisible to him. It’s become automatic.

Now let’s look at this guy’s house. It’s predictable that everything inside that house is set up to be usable via biceps. Nothing in this guy’s house requires a pushing motion, because that would require his triceps. It’s all based on the use of his biceps, isn’t it?

Now let’s pretend that we sit down with this guy, and share with him everything that is possible if he were to start using his triceps. We talk about how he’ll be able to create new doors in his house that don’t always require being pulled. We’ll talk about all of the different kinds of work that he can do using these newly developed muscles that he never realized he had. We talk about how the limits of what he thought he was capable of would be completely shattered, and he’ll be able to achieve new things that he never imagined were possible.

His response will also be predictable. He’ll shake his head. He’ll look at us, and say “What are you talking about? You’re crazy. Look at my house — there’s no such thing as a different muscle group. Everything here clearly proves that I don’t need another muscle group, let alone that one exists”. He’ll take you on a walk through the world, and point to all of the ways that he gets what he needs to get done, using his biceps.

He’ll think we’re crazy. He’ll point to the ample evidence he’s collected that proves that biceps are all you need, and disproves that these things called triceps even exist.

Maybe if we’re really good, he’ll give us a chance, and do some of these exercises we promote. But as he sits down to do them, he starts to shake as his atrophied triceps try to lift a minimal amount of mass.

He throws down the object he was trying to push up, and shouts at us, “See! Look! If these triceps were all you made them out to be, this would be MORE efficient! Not less efficient! And look, I’m shaking like a goddamn idiot! I never shake when I lift with my biceps! Clearly I’m right. You’re crazy. I’m going back to using my biceps”.

We are each this man.

My job is to point out to you the ways you aren’t using your triceps (and to do my own work with my own coach so I can discover the muscles I’ve forgotten about). My job is to love you when you vibrate like crazy, feel stupid and get genuinely angry at me for inspiring you try to train a different muscle.

Sometimes you hate me, simply because I’m the only person in your life that suggests you could do something outside of the comfort of your bicep-focused world.

I love you anyhow.

I stand for you to develop those triceps, because I think you are magnificent, and I want your gifts present in the world.