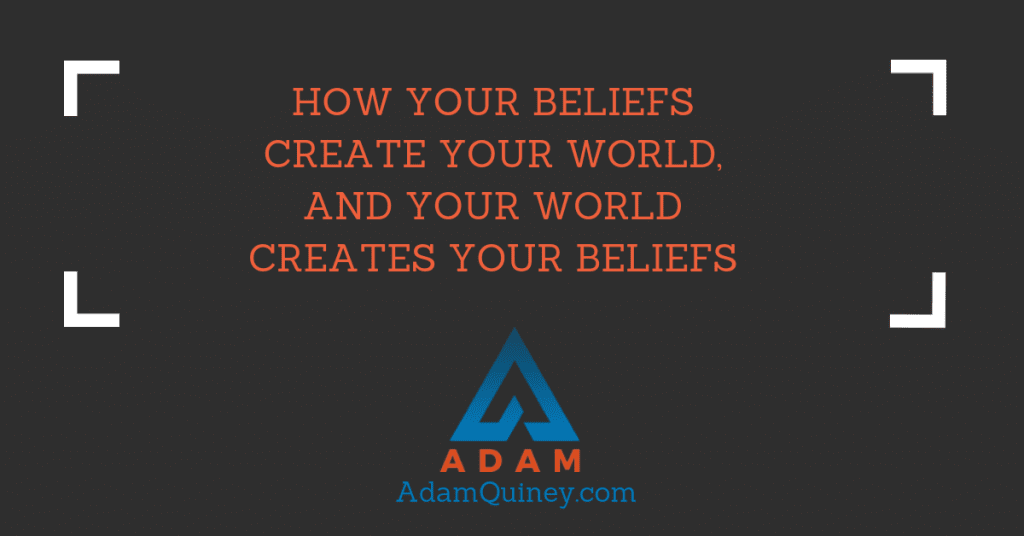 You’ve got a set of beliefs, rules, stories, guidelines, and whatever else you want to call them, and they dictate the appropriate way to act as a human being. How you came by those beliefs isn’t really the point. Although exploring that will seem like you’re making headway, it just wraps you back up into mental masturbation and keeps you from actually creating yourself as the person you want to be. For now, just trust that you came by these beliefs honestly. They were handed down to you by your parents, and formulated as you grew up, went out into the world, and learned how to be around people.

From Belief to Actions

From those beliefs, you take action. Put differently, you act in ways that are aligned with your beliefs.

You aren’t conscious that your belief is the reason you feel annoyed and awkward — you’ll hold that the problem is over there with the other person, or “just the way you are”.

But it’s not. There are other people just like you that don’t have this belief, and relish the opportunity to connect with another person, regardless of the circumstance. The only difference is your belief.

From Actions to the Environment

Your actions create a world, or environment, around you consistent with those actions. Because you act based on your beliefs, the environment you slowly but surely create is a reflection of those beliefs.

For example, if you don’t believe it’s okay to talk to strangers on the bus, you will tend to create friends that share that belief. Spending time with people that actively seek out and talk to strangers on the bus will feel uncomfortable and awkward, and so you will naturally filter these people out. Collectively, you and your friends will judge people that do weird things like stranger-talking, and will feel good in your shared belief.

You will seek out jobs that don’t involve a lot of cold calling (as this is similar to talking to strangers) and instead end up in a career that aligns with this belief.

Over time, you assert more and more of your beliefs in the world around you, via your actions, and end up with an environment that is perfectly consistent with the beliefs you hold.

From Environment to Belief

Finally, your environment now confirms and reinforces the beliefs you have. If someone was to tell you that it’s simply a belief that you shouldn’t talk to your strangers, you’ll be able to show them all kinds of evidence in your world that this is anything but a belief. You’ll point to how your career actually requires that you honour people’s private space and don’t interrupt them. You’ll point to how all your friends hold similar beliefs.

Your environment will provide you all manner of justification and evidence for your beliefs being something much more than simple beliefs. They are the reality of the world around you.

Consequently, changing a belief is much harder than simply having someone tell you “Hey, that’s just your disempowering story!” (Have you noticed how being told this doesn’t seem to magically transform you?)

What We Do with Beliefs

We want to get clear on the actions you take with your beliefs. Here are some of the things we do in relation to our beliefs:

Below are listed some of the common approaches we take with a belief like that, and how it would show up using the belief of “Money is Evil” as an example: