I didn’t realize I have a superpower 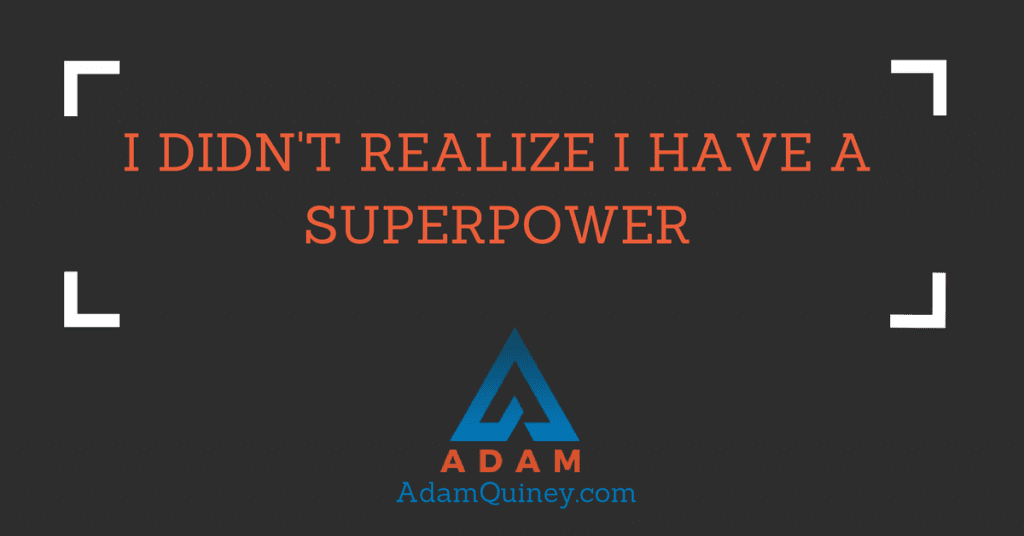 For years, I thought I was a loser.

But what I didn’t realize was that this is my super power.

I was the kid that was good at math and got good grades without really putting in a whole lot of effort. I remember hearing one kid looking through our test scores (before they anonymized them) and muttering “look at this fucking genius”. But I didn’t really fit in with the smart kids.

I was one of those kids that played Magic the Gathering in the school library at lunch, but I didn’t really fit in with those kids either.

I played soccer, but I never really fit in with my soccer team.

I just didn’t fit in.

And, it became my lifelong quest to do so.

I got super good at it too. I learned to study people deeply. If I watched them, I could capture all of their mannerisms. I could identify how to speak so that I would be accepted by them. I noticed how they dressed and could mimic that too.

I could perform to exceed the expectations in whatever job you gave me to do — after all, it was just a matter of learning the rules that I had to follow, studying them, and then acting them out.

I was a chameleon. I could fit in anywhere I needed to.

Except I knew that I never did.

Even when I had mastered all of the social cues, could dress more appropriately for my role than anyone else, and was exceeding expectations, I knew I didn’t belong.

I knew that it was only a matter of time before someone found me out.

And even worse, I was BORED. On some level, I was annoyed that I wasn’t getting kicked out.

Shouldn’t you know that I didn’t belong? Shouldn’t there be some kind of challenge to all this?

Once bored, my behaviour would get reckless. How far could I push and bend the rules? What could I get away with?

Eventually, I would have to leave — there just wasn’t any other option.

And then I’d go somewhere new, and repeat the same pattern.

Where is the god damn group that I’m supposed to belong to?!

That was the anguished question that was always on my mind.

Boy did I have it wrong.

I never realized that I’M NOT SUPPOSED TO FIT IN.

I never realized that this is my gift.

My gift is that I DON’T FIT IN

Because world leaders don’t fit in.

World leaders don’t fit in, because they have a vision that exceeds what is currently available.

When people stop and ask themselves “How can I conform to these rules?” (maybe while complaining about them at the same time), world leaders say, “These rules are bullshit. How can I get them changed?”

World leaders don’t fit in because they are OUT OF THE ORDINARY.  They aren’t the same as everyone else. They don’t fit in to what conforms — they create what people will conform to next. And once they’ve done that, they move on to the next thing.

And if you’re my client, you aren’t either.

But the problem is, even though that’s what society tells you will make you feel good about yourself, it doesn’t. You’re still not feeling like you fit in. You’ve done everything you were meant to do, but it’s like trying to pound a round peg into a square hole. It just doesn’t work.

IT’S NOT MEANT TO WORK

You’re on this planet to be a world leader.

Together we unleash that world leader. We bring your true power to the forefront. Together, we have you get that you’re not here to fit in — you’re here to shatter the mould, and create the world anew.

Quit fucking around. The world needs you to lead. Let’s talk.