It Won’t Be Good Enough 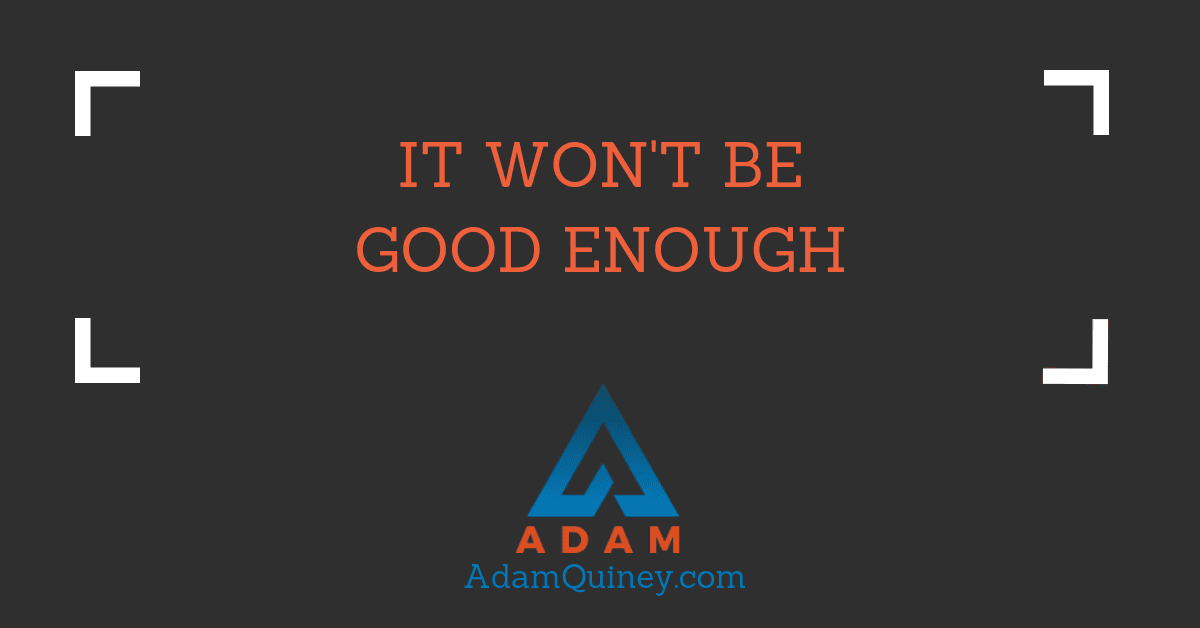 What you’re working on probably won’t make much of a difference.

You won’t get enough followers, you won’t have a big enough platform, you won’t create the waves you’re hoping to make.

You probably aren’t a good enough writer, your FB lives aren’t very engaging and even though you’re building toward something, you’ll probably never be able to reach the number and volume of people that you dream about hitting.

Your face isn’t recognizable enough, your passion doesn’t get expressed enough, and things won’t happen as fast as you want them to. Not only that, but you aren’t working hard enough and you probably aren’t committed in the way that’s required. You aren’t living and breathing this thing that you say matters to you, so it’s probably not worth pursuing anyhow.

Your friends won’t support you, your family will be concerned, and the rest of the world will silently laugh, click like once or twice, and move on to searching for more pictures of cats. (Cats are pretty rad).

That book that you’re talking a lot about and taking forever to write? It probably won’t be that interesting to anybody but yourself, and even if it was, it probably won’t get into the right hands of the right people.

It all requires so much coincidence, happenstance and good fortune that the odds are against you. If you’re doing this for some meteoric rise, viral fame, or admiration, you’re probably going to fail.

So now that that’s established, where do you want to choose from?

You can keep choosing the possibility of fame as motivation, and you can keep letting your fear that it might not work stop you.

You can try to suffocate your fear by depriving it of oxygen, hoping that if you ignore or it pretend it isn’t there or stuff your fingers into your ears and shout loudly, the fear will go away or stop stopping you.

But all that achieves is keeping yourself from turning around and really coming to terms with what’s so.

The opportunity is to confront and integrate that fear. Instead of trying desperately to outrun or ignore it, face it head on, and accept that maybe there’s some truth here.

I’m saying that on the journey towards full-expression, it’s quite likely that you’ll be confronted by and receive evidence that your fears are true.

And if it’s true that your masterpiece probably won’t be good enough, won’t have the impact you want, won’t be read, won’t be loved, won’t earn you accolades, won’t make you rich and won’t create any new friends for you, you get to address this fear upfront, right now, rather than after you’ve put all of the stakes into the centre of the table.

If that’s so, then perhaps you’ll have to create a different reason for taking this on.