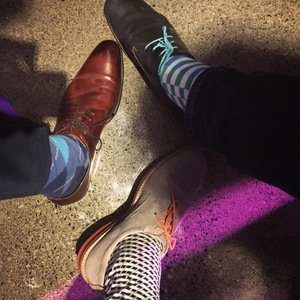 I have a pair of pants that are a bit of one thing and a bit of another.

They’re a bit of two things, but not really fully either.

It’s that space between things that I relate to as funky.

I’ve always liked that merging. Putting two things together that don’t belong, so as to create something that is both jarring and pleasing.

A dress shirt and tie with a pair of baggy shorts.

Sometimes this looks stupid. Other times it looks great.

The thing about being funky is that there isn’t a right way to do it.

As soon as you’re trying to do funky right, you’ve lost sight of what it means to be funky.

Because being funky means that you’re outside of the space of being right.

Right implies that there’s a correct thing to do.

As soon as you’re doing things right, you’re no longer funky, because funky exists in between right and wrong.

So if funkiness isn’t something you can get right, what defines the difference between being funky and being a square?

Funkiness fails precisely when people are trying to get it right. Just because you saw Pharrell Williams wearing a giant (some might say ridiculous) hat at a music awards doesn’t mean it will be funky when you do the same thing.

Being funky also fails when people deliberately try to get it wrong. (“Okay, well, if you can’t get it right, I’ll just deliberately mix things that aren’t meant to go together!”).

This fails for the exact same reason that trying to get it right fails.

Someone doing something specifically because it’s wrong is still acting based on a set of principles external to themselves (and therefore, external to their own self-expression). Their choice is still in reaction to something external (as opposed to a creation of their own internal self-expression). The only difference, in this case, is that the action they take in response to those principles is one of rejection instead of conformity.

This is the same thing that messes people up in their leadership.

When people start training as leaders*, they first aim to figure out the right way to be a leader. If they get reflection that their sense of humour gets in the way of their power, they’ll look for the formula for the right amount of humour. Or perhaps they’ll try leading again, attenuating the amount of humour that they are using, all the while looking to their coaches and leaders for feedback that they’re doing it right this time.

The challenge with leadership is that there isn’t a right way to bring yourself and your self-expression. All there really is feedback. And then you get to take that feedback and take the next step.

People get all tangled up with themselves trying to do it right, or making the feedback mean anything other than an opportunity to learn more about how they’re showing up.

As long as people are doing things right, they know that they aren’t doing things wrong— and this is where most people fail as leaders. They spend their energy focused on not doing things wrong, instead of pursuing the vision they have, and being open to the feedback that may come along the way.

The thing about leadership is that you can’t do it wrong.

The bad news is that you can’t do it right either.

So quit trying (to do it right/not wrong).

Instead, take whatever the next actions are that move you towards the vision you desire. Step past the concerns about how you might look, or what people might think or say — because those things have no bearing on your leadership.

* (really training — not reading books or taking online courses, but getting coached powerfully, and trained, uncomfortably, in the moment)