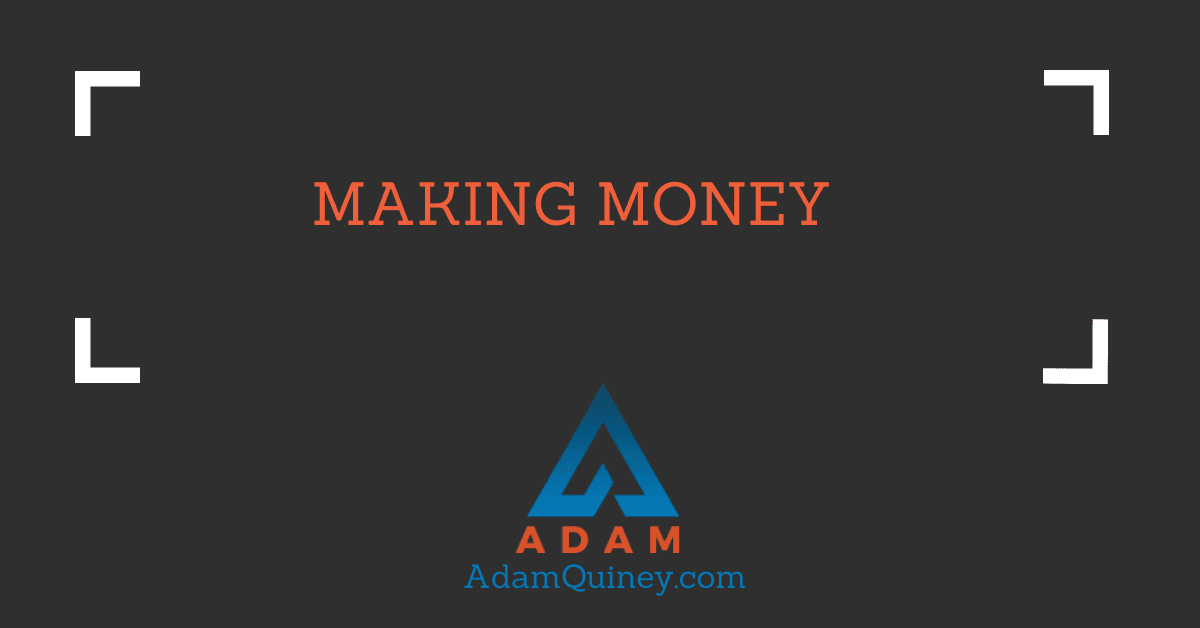 The first thing I had to do was make money about me.

When I began as a coach, entrepreneur, service-based professional, or (maybe just “Adam”, for the first time), I was scared to ask people to pay money to work with me. I didn’t know how I could possibly ask people to pay $500 a month — that was asking them to pay $125 an hour, for my time. That was more than I’d ever been billed out at, even at the height of my careers in software and law (granted, I didn’t stay long in law, but that’s beside the point).

It took me a long time to own that I had value, even if I was scared to stand in that value. I wanted to avoid having to confront the places where I didn’t feel I had value. More importantly, I wanted to avoid being confronted by the places where /other/ people didn’t feel I had value, and I was especially afraid of those areas where both of our beliefs collided. If I charged a low rate, I never had to confront any of that. At a low enough rate, you’re not going to get confronted — people will simply nod their head, they’ll compare you against the rest of the market, and either be a yes or no. “Seems reasonable”, they’ll think in their head.

I didn’t want to be reasonable. The notion of being reasonable, as a coach, is a little ridiculous, because any transformational work operates in the face of what is reasonable. Being reasonable meant that I was never confronted by stories about my own value, but it was never going to create transformation either. Transformation without confrontation is like … Well I don’t know what it’s like, but it’s dumb. It’s a chimera — it’s not real.

So I had to overcome that fear. I got coached, I created awareness, and eventually, I stepped into what was scary — asking for a strong fee, practising acting from the place of owning my value, even if it still terrified me. You could call this phase “fake it, until you /become/ it”.

And eventually, people started to say YES, and I started to believe that I was worth what I was charging.

I kept doing this for a good while, raising my rates incrementally, and each time, recreating my own story about my value, so that I could keep pushing beyond my current limitations.

But there came a time when making money about me would no longer work.

I was attending events and listening to coaches tell stories about making proposals of $50,000, and getting paid all at once. One person shared that she had made a proposal of half a million dollars. I could not fathom how you could hold this possibility. This was so ludicrous, it didn’t even make sense to me.

That was the kind of game I wanted to play. I wanted to be a conduit for someone to invest that much into the possibility of their lives. For people to make a commitment to themselves that was that powerful (and terrifying).

And that was the point where I realized the money simply couldn’t be about me. I wasn’t worth that much — but their dreams were. Their vision was.

You can’t do this until you’ve passed the first hurdle, but once you have, it’s time to set it down and move on to what’s next. The money is about them. Their investment. Their possibility. Their commitment to their future.

Are you willing to face all of your own fears, stories, beliefs and inadequacies, in service of supporting someone else to blow their lives up and create what is possible?

That’s the game of leading transformation.

What are you making money about? And how is that impacting your ability to make money?

Hey, are you interested in me leading a call on money and your relationship to it? If so, comment below, and if I have enough interest, I’ll create something.