Missing the Point of Yourself 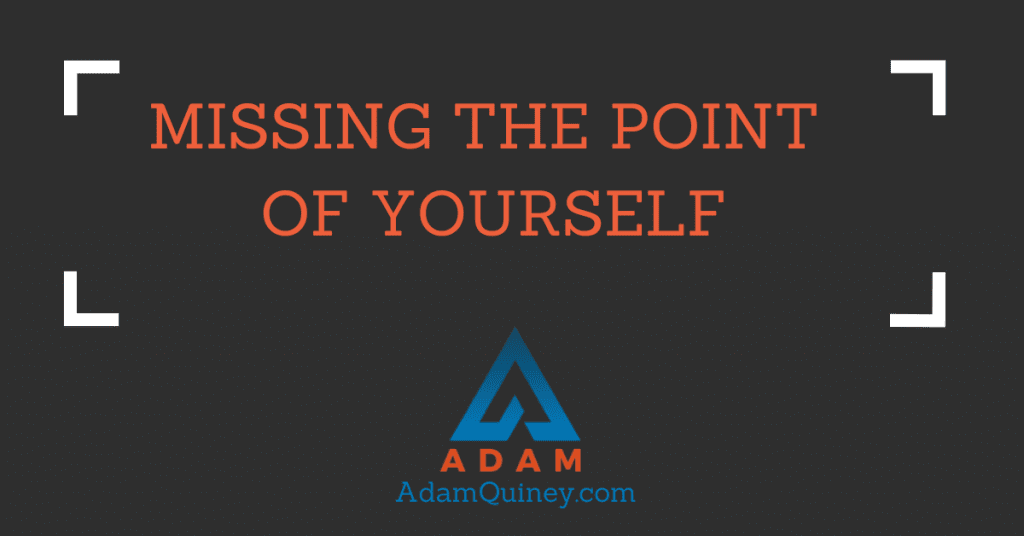 There I sat, using big words, talking about subjects I could pontificate on for hours, and discussing things with great intellect and passion.

I was completely missing the point of myself.

I was putting so much effort into proving to those I was with just how smart and passionate I was. Every time the conversation shifted to a new topic, I had a quip, or a fact to contribute. Something to ensure people took note of my braininess and realized “Boy, Adam sure knows his beans when it comes to ________”.

It was exhausting. It was exhausting for me because it required I put on airs every time I was around someone that triggered this need in me to look smart. My choices were either to keep getting more efficient at this tendency, responding to a deeper need beneath the surface, or, to simply avoid the kind of people that drove this up. A third option was to simply stop caring what they thought about me — disconnecting from them and their intellect altogether, so that I could be around them, without actually having to be with them.

It was exhausting for them because they had to be with my attempts to prove something that was already obvious. All of my efforts were unnecessary. I didn’t need to showcase who I was, that was already plain to them. I was like Mother Theresa, if she went out of her way to tell you about all of the things she was doing that showed how generous and compassionate she was. People were left confused, and bored. “Yah, yah, we get it — can we move on from this and just … be with each other?”

You don’t have to feel bad for me doing this, because you do this too. We all do.

Somewhere along the way, we get trained that who we are isn’t enough, and once you’re sold on the proposition that you need to be something more than what you already are, you’re on the treadmill.

And once you’re in that game, there’s no way out. How do you prove that you’re enough of what you already are? If I somehow convinced my dog that he wasn’t “doggy enough”, when does he ever manage to prove that he is doggy enough?

You can never get enough of what you don’t really need.

This is called missing the point of yourself. Losing sight of who you are, and always have been, and falling into the inevitable sandtrap that you need to prove (to yourself, your parents, the world, God, etc.) that you are enough.

You can go really far in life, missing the point of yourself. That need to prove that we are enough will drive us to successful careers, exciting relationships and doing good in the world.

It’s not that you won’t create an impact. It’s just that all of that impact, all of that success, and everything else you create from missing the point of yourself, is built upon a foundation that you need to prove something that is already true about yourself.

And that leaves you perpetually spinning. It will never be enough.

Want out? Here’s where you start:

What do you feel the need to perpetually prove about yourself? (Either to yourself, to your parents, your peers, the world around you, spirit, etc.)

If you can name it, you can start to tame it.