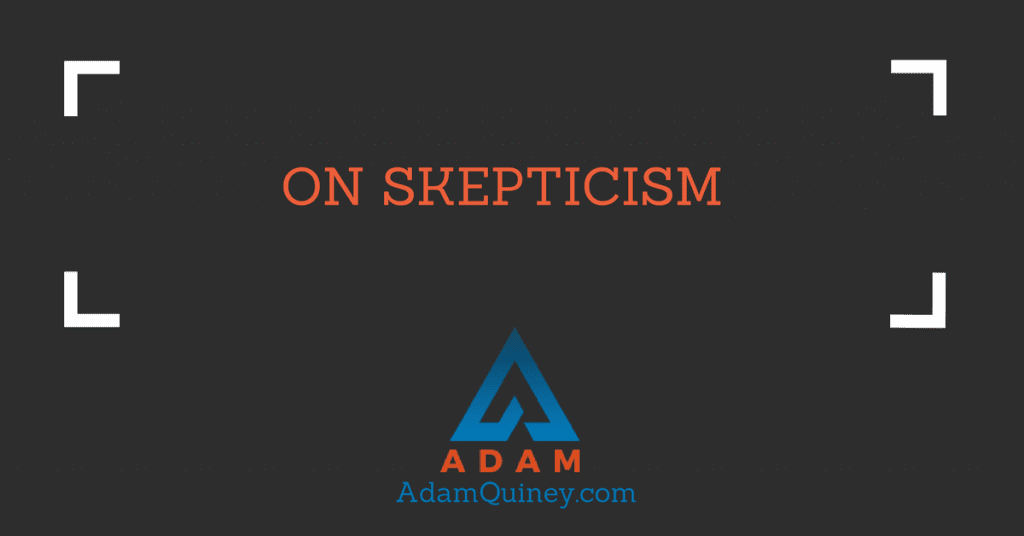 For a significant part of my life, I self-identified as a skeptic. I dreamed about going to skeptic meetings, and having an impact in the skeptical movement.

I was also very proud of my skepticism (most people would instead use the term “obnoxious”). I could see through bullshit, and it was damn hard to get one over on me. I would debunk the claims made my friends and co-workers, explaining why the dowsing rod they were describing was utter bullshit.

I would write reviews about pseudoscientific movies, and share them on my blog — here’s a review I wrote about Zeitgeist, which I still think is fairly good.

But all of it was part of a strategy. Ironically, it was all part of a conspiracy run by my Survival Mechanism to keep me safe.

See, like anything else, there’s a cost and payoff to a particular way of being.

On my most recent coaching call, my coach and I were looking at the fact that I found myself skeptical that anything was actually going to make a difference.

I italicize found myself, to draw attention to my language. It tells us something already — notice how at effect it is. It’s like, I have no agency in being skeptical. I just happen to “be that way”..

The reality is, I’m choosing it, just like anything else. For me, skepticism is fairly automatic. It’s a default that I can go in to that protects me.

Let’s look at some of the costs and payoffs of this pattern.

My memories of Junior High were mostly of being terrified. I was bullied, like everyone else, although it was verbal and emotional, as opposed to physical. I was also new to my school, so I didn’t have any safe spots. I didn’t have any friends that I was bringing to this scary new world with me. It was just me.

What scared me almost as much (if not more so) than being bullied, was seeing other kids being bullied or made fun of. This terrified me, because I knew that the same thing could happen to me. There didn’t seem to be much logic to this type of cruelty, just that if you were unlucky that day, you were the one that it landed on.

The other thing I could not stand to be with was the feeling of embarrassment. Every time we had to do oral presentations in a class (which felt like roughly every two days to me), I would stand at the front, go bright red, vibrate, and stutter through my words. The worst part about this kind of embarrassment was that everyone laughed at you (or at least I created the story that they did), both to your face, and worse, behind your back.

Finally, the worst type of bullying of all was the pretend-your-cool-so-we-can-then-make-fun-of-you. The kind that the kids ran on Carrie in the titular movie, right before she snaps. The kind where you finally think that you’re accepted, and then it turns out you’re a big fat loser that was just getting set up.

So, one of the defensive measures I put in place was creating a strong sense of skepticism. I wouldn’t take a compliment at face value — what if it meant that I was getting set up to be made fun of?

My attitude was “Better to remain cool , detached and aloof than to accept a compliment, feel good about myself, and risk being made a fool”.

That approach is fine if you’re committed to a life of being cool, detached and aloof, and free of any random acts of kindness.

I made my motto “There’s no such thing as a free lunch”, and then I created a world where that was true (because at the very best, I would analyze the crap out of every single free lunch I was given — and let me tell you, that was a cost, if nothing else was).

So, as I pull this contraption out, give it a shake and really look at it, what I can see is that my skepticism is ultimately designed to keep me safe. It’s there to stop me from diving in to something and then feeling like an ass.

That’s problematic when I want to create a breakthrough, because no breakthrough ever makes sense from where you are currently standing. If it did, it wouldn’t be a breakthrough. A breakthrough fundamentally changes what is possible in your world. Until you create the breakthrough, those things are impossible. They’re not even in the realm of something you’d consider. (So from the point of view of protecting ourselves from looking foolish or being taken advantage of, it kind of makes sense to be skeptical).

When does skepticism stop being a choice, and veer into the realm of the automatic for me? (NB: This is really all that matters. There’s nothing wrong with being skeptical, or anything else, until it stops being something we can choose, and becomes a default reaction). Usually when I’m worried about feeling dumb, taken advantage of, or unsure of the “right” way to move forward.

In summary: every time I feel vulnerable.

So, what I’m starting to distinguish as I write this (this post is really much more for my benefit than it is yours), is that if I want to continue creating breakthroughs in my life, I’m going to have to tackle the skepticism head on. It’s predictable that it will show up every single time I take on something new and scary (when do you feel most vulnerable?).

Hilariously, I was even skeptical about exploring my own skepticism (sometimes coaching makes me feel schizophrenic) — but as I go through this process myself, and with my coach, it’s clear that this is a big thing that stands in my way.

More as I continue to distinguish this. For now, this is as far as I’ve gotten to, and as much of my process as I can share with you.