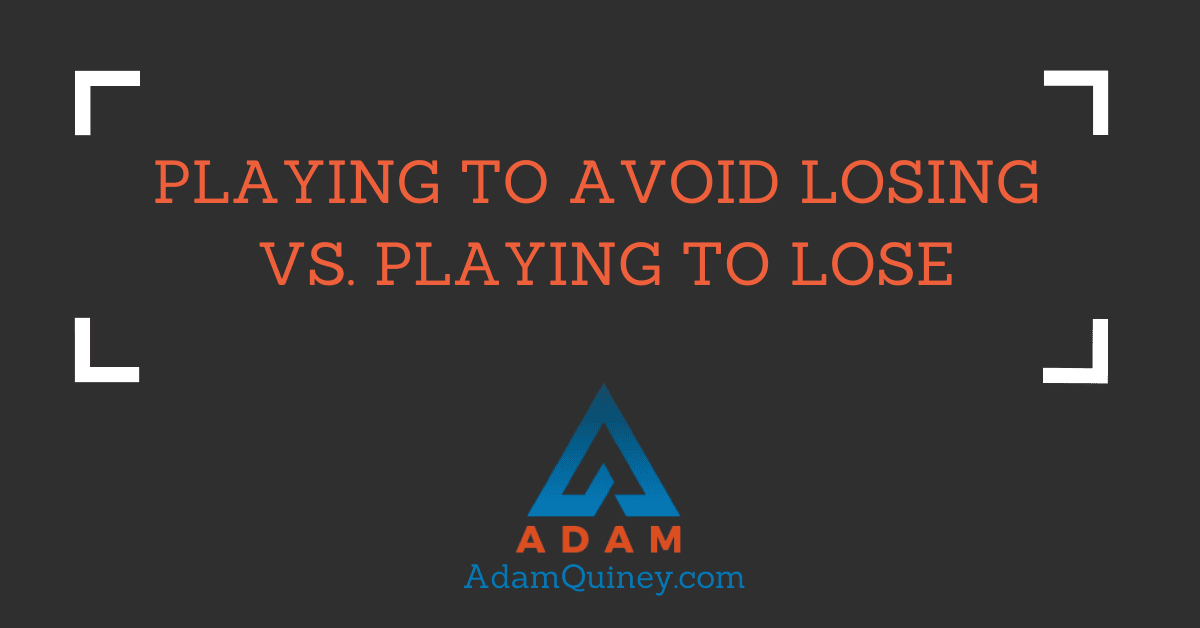 What’s the most obvious thing to do, if you’re playing a game and afraid of losing?

Play the game to win, right? No brainer.

But that’s not actually what we do. When we’re afraid of losing, what we do is play the game in order to avoid losing.

What are you afraid of being? What do you worry people may conclude, discover or have already decided about you? What are you worried might be true about you?

Then, consider the possibility that your life, to a large extent, has been set up to avoid being whatever you just answered.

At some point in our lives, we decide it’s time to make some changes. We do this because we’re dissatisfied with some parts of our life and we want to deepen ourselves.

This is the point where we realize that we’ve been playing to avoid losing, and so what do we start doing?

We lean into losing.

Here are some examples:

👫You notice that you always bail out of relationships about three months in. Seeing that you avoid commitment, you force yourself to stay with the person you’re with, even if you’re unhappy or things are going poorly.

💰You notice that you spend money as fast as you make it. To compensate, you vow to stop spending on new things for the rest of the year.

🙅‍♂️You notice that you tend to say YES to way too many things. To address this, you practice saying NO to everything that comes your way.

We’ve caught the way in which we’re avoiding loss, and then conclude that what we want requires practising losing on purpose.

For a while, losing on purpose is going to give you something different than playing to avoid losing. That thing you’ve been afraid of? Now you’re intentionally creating it. You’re diving into it. It feels courageous — and it may well be, for a short time.

But that change is short-term and fleeting. Yah, it feels different initially, but over time, is the result you’re really going for intentionally losing?

Of course not. What you want is to win, whatever winning looks like for you.

You want to WIN. The trouble with playing to win is that you have to be willing to experience losing, even and especially, when you’re not aiming for it.

It’s a lot easier to be with the sting of loss when it was something we intentionally created. This allows you to sidestep the disappointment and heartbreak that comes from really going for something big, and coming up short.

Ironically, when you move from playing to avoid losing, to playing to lose on purpose, you’re still caught up in an orbit around the thing you fear. Rather than trying to avoid it, you’re now spiralling into it. There’s nothing truly new available — just a different take on the same game.

Let go of solving “the problem” for a while. What is it you really want? What does winning look like? And what are you going to have to be willing to be with if you go after that?