Possibility for All! Except Steve. 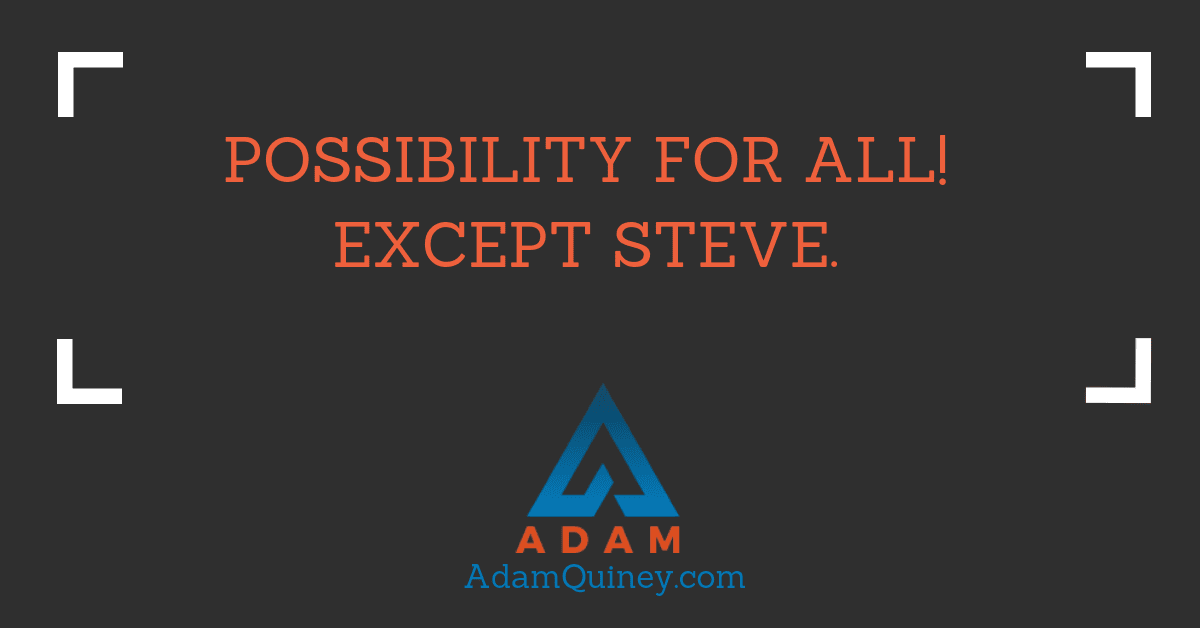 But then you warn me about not having people dream too big. You caution that if you encourage everyone to expand their horizons and play in a world where anything is possible, you may lead people down a dangerous path.

People may do things like quit their jobs, put their livelihoods at risk. They may do reckless things — maybe they’ll leave their family, or start skydiving. Maybe they’ll throw all of their money at the stock market, placing a bet on some wild intuitive hit they get.

There’s a few things wrong with this way of relating to human beings.

The biggest issue is that you’re operating with the assumption that you know what’s best for someone. It’s paternalism at it finest — suggesting that there is a certain class of people who have a diminished capacity (whatever that capacity happens to be), and while it’s great for people to dream, for some of those people, it should stop at dreaming (and maybe even before).

If they really pursue what matters to them, they’ll create harm to themselves and others, and so it’s better just to keep that in check.

Worse yet, you hold yourself out as the arbiter for this decision. As though your assessment of what people are capable of is an accurate measure of their possibility. You get to be Caesar, picking a choosing who is worthy of really living into their possibility, and who should continue to scrub the toilets (assuming that scrubbing the toilets is not their wildest dream).

You’re in good company — this is a pretty common approach to leadership. When I start working with someone, they’ll talk about how they are really good at holding possibility for their staff, and how they really see the best in everyone…

Except for Steve. Steve, is a garbageperson.

“Possibility for all! Except for you Steve, sit back down. You shouldn’t be at this meeting. Go back to scrubbing the toilets.”

(Seriously, who let Steve in here?)

Who are you to judge this person’s path? To determine whether this person is capable of withstanding a little hardship in pursuit of what really matters?

Show me a hero’s journey where the hero does not need to overcome some calamity, and I will show you a boring book.

And the real reason you think people need to be protected from that is that you yourself don’t have faith in your own ability to recover from a fall like this.

What goes on outside sucks, but the real tragedy is what’s going on inside. Your ego will convince you that you’re fantastic at holding possibility for all and that you can see the potential in everyone, but the way you relate to the world around you tells me everything I need to know about your own blindspots.

I believe you when you tell me you’re here to lead.

But before you can do that, you have to take the plunge and discover for yourself that you are capable of recovering. Until then, you’ll forever limit people’s possibility by protecting them from your own fears.