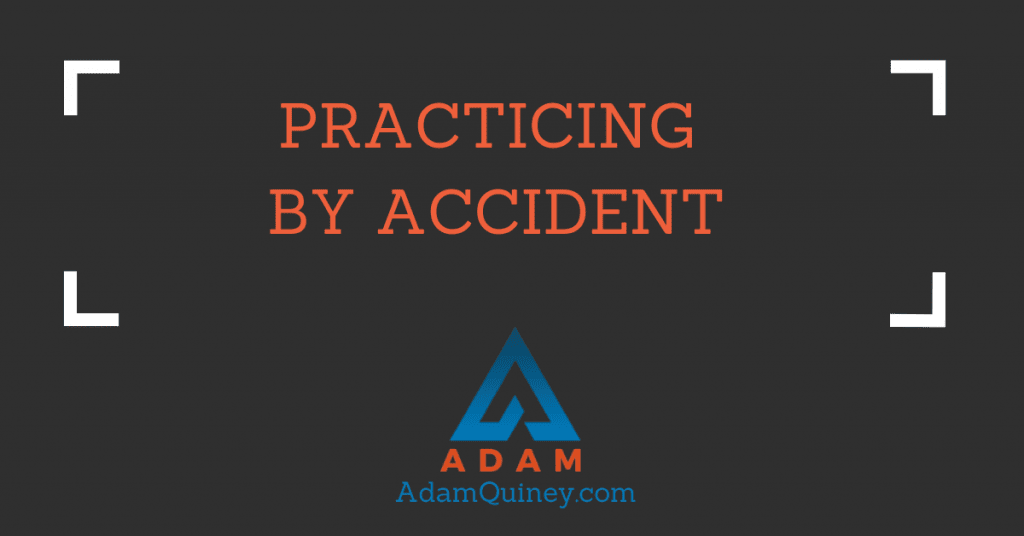 Your resistance takes one of two primary forms: active and passive.

Active resistance is easier to identify. It’s the stuff you do that deliberately avoids whatever you have resistance to. Procrastinating is usually the most obvious one, but there’s also sitting and staring at your computer screen and refusing to take the action (frozen with fear), making excuses for why you can’t just hit “Go Live” or “Publish”, and so on.

Passive resistance is sneakier. Passive resistance encompasses all the ways you allow “life” to get in the way of what you say you’re committed to. If I say I want to meet the woman of my dreams, but after a month, I’ve simply been too busy to make time for dates, that’s my passive resistance showing up.

Passive resistance is a function of the fact that your life currently has just enough room for everything that is already present, and little else. We don’t assemble our lives with vast swaths of empty space, waiting to be filled with that extra stuff we only just realized is important to us. And we certainly don’t create our budgets with large savings specifically set aside to invest in that thing we might realize we want a year from now.

Passive resistance is usually centered around time and money. You have enough time and money for the life you are already leading, and maybe a little incremental growth around the edges. The big swings out into the possibility of your life? You’ll take those on when you’ve got more time and/or money available, and conveniently (at least as far as not having to confront what you are resistant to/afraid of), that point will always be just over the horizon.

All the stuff you say you want in your life, but don’t seem to be creating? You’re passively resisting it. Passive resistance is subtle, covert and often invisible. It’s easy to argue away too, because it’s always a valid argument that you just don’t have the time or money — that much is absolutely true, for the reasons just listed above.

One of the forms of passive resistance I often bump into is what I call practicing by accident. With practicing by accident, I start by creating a new way to practice with my resistance. Maybe I’ll decide to practice connecting deliberately with people for which I’m generally afraid to do so. I don’t create any structure to support me in doing this — I just tell my coach I’ll take this on, and then head into my week with positive thoughts and ambition.

The next time we sit down to talk and check in with how things have gone, I realize a week has gone by and I’ve simply forgotten to take this practice on. Instead of deliberately taking on my practice, and creating the structure to support me doing so, I’ve just gone about my usual life, and once again butted up against my passive resistance.

So what do I do? I look to see where I may have practiced by accident. These are the places where I just “happened to” end up doing something that looked like my practice, or was at least adjacent to it, and then give myself credit for it.

Like if an athlete was committed to improving their sprint time, and committed to sprinting every day, and then when they were checking in next week, realized they’d forgotten, but had sprinted for the bus two times, so that counts.

This isn’t about making any of this wrong — it’s just about getting more clear on the way our resistance shows up and stops us from creating what we say we want. Sure, it’s great the athlete ran for that bus, but is that the level of practice that’s really going to achieve the goal they say they are committed to?

How does your passive resistance show up in the way of this?