Quora: How is coaching important in a business? 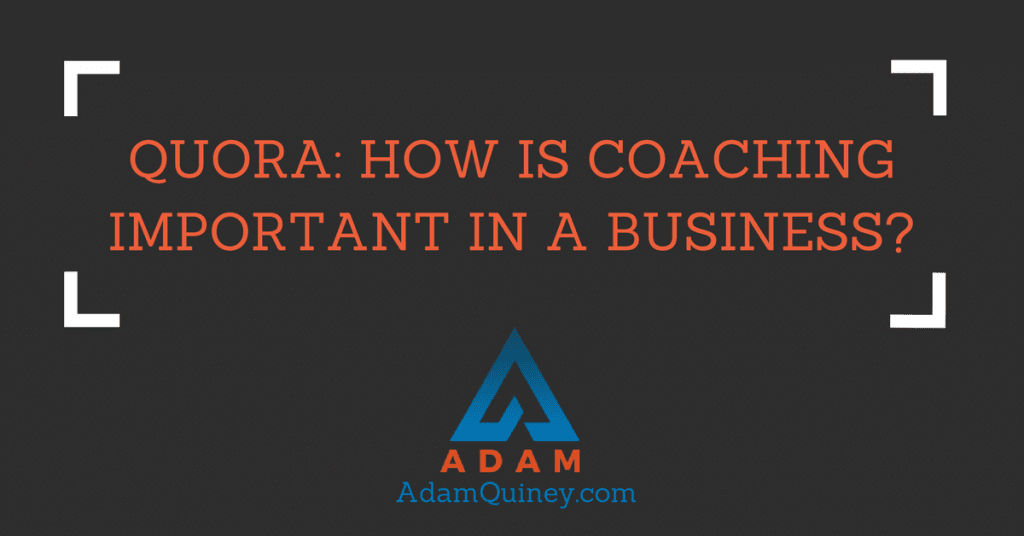 Someone on Quora asked me to answer the question:

How is coaching important in a business?

Here is my answer.

I’ll give you a few different lenses that you can look through to see the impact of coaching on a business; from there, you can determine whether or not it is important in a business.

The leader is the clearing

Consider that the leader of any organization/group/team/etc. is the clearing for the team.

Let’s look at this on the scale of a team.

This means that how the leader is being is how the team will be. If the leader shows up unwilling to be vulnerable (say, for example, by owning their mistakes), then the team will also show up guarded and protected.

A leader who is resenting the task put before him, will have a team that is prone to resentment.

And, consider this one: A leader who is resenting the task put before her and isn’t able to admit to herself that she is resenting it, will have a team that is prone to resentment, righteousness, and blind to those tendencies.

Trying to change something that lies beneath your awareness is impossible. The first step to changing anything is to create awareness.

Coaches work with leaders to bring insight in to these blindspots, and have the leader actually transform their being.

Since the leader is the clearing for the team,  transforming the way a leader is being, transforms the way the team is being.

First, consider that there are levels of awareness:

The first category (what you know) are things that are currently in your awareness, and you know them. This is stuff like long division, knowing how to play the piano, being able to speak the language you speak in on a daily basis, the score of last night’s football match, etc.

The second category (what you know you don’t know) are the things that you do not currently know, and still reside in your awareness. This is stuff like when you decide you want to become an accountant, and know that you need to go to school to learn the skills of the trade. You are actually aware of this kind of information, and aware that you don’t know it.

The third category represents your blindspot. It is comprised of everything in the universe that doesn’t fall in to one of the first two categories.

Because everything in the third category is outside of our awareness, we tend to think of the first two “worlds” of information as very big — because they take up the entirety of our awareness. We actually believe they’re infinite, because it’s all we can see.

But, the reality is that the third category is infinite and vast, and the first and second categories are finite and small.

Most people tend to try to solve their problems by gathering more information in the second category. The problem is that there is nothing new in that category. It is simply applying more of what already lies in your awareness.

You cannot solve a problem with the same level of thinking that got you there. This is why so many leaders and organizations continue going around in circles. They are despearately trying to learn more of what they know they don’t know (the second category), hoping that it will solve a problem for which the solution lies in the third category.

The organization is no different

Finally, consider that organizations operate in the same manner as an individual. Organizations have their own blindspots, their own leadership strengths and weakness, their own tendencies, etc.

An organization can be coached in the same way that a leader can. It’s simply a matter of scaling. If those first two things struck you as valuable to a leader, consider creating that same level of transformation across the entire company.

So, those are two and a half different places to take a look at how coaching might be important in business.

What do you see?

What’s your answer to this question?

How is coaching important in a business?