So You’re In a Hole 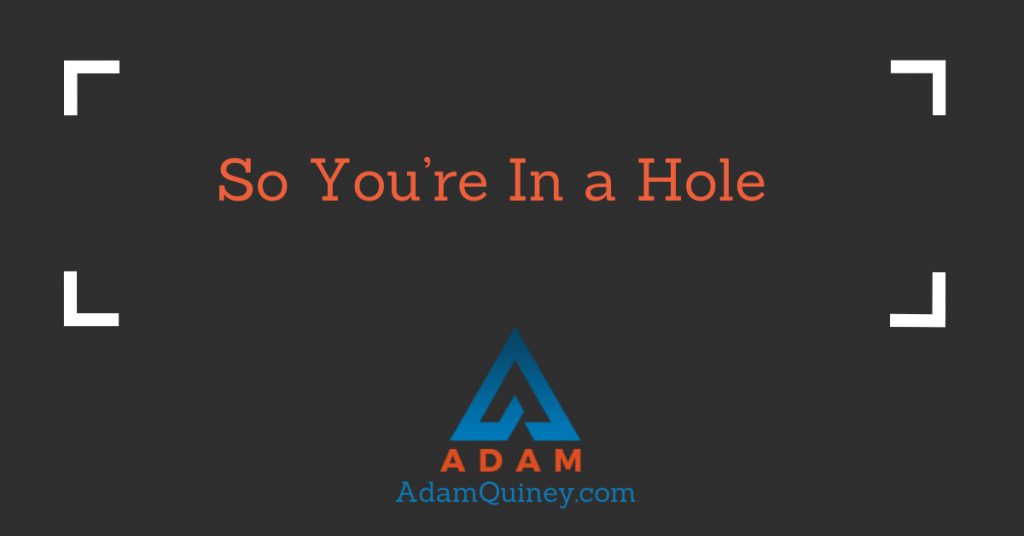 Imagine you’re walking along, and you happen upon someone that is in a deep hole. The person you happen upon, who we’ll call Reggie (because he’s always called Reggie), seems kind of distressed. He’s pacing in the hole, he’s visibly frustrated. Maybe he’s swearing to himself.

We’re going to look at this situation as a way of showing how our attempts to help people actually end up worsening the problem, and how transformational work transcends this (and why it’s so challenging to empower).

Take a moment right now to pause, and ask yourself what you think there would be to do, to support Reggie in this moment.

Most people, upon pausing and reflecting, offer answers along these lines:

– “I’d reach down and give Reggie a hand, helping him up out of the hole.”

– “I’d jump in the hole with Reggie and start building a ladder together.”

And so on. Your answer may have been different, and that’s fine.

The first thing to notice about all of these approaches, as well as most of the ones I haven’t articulated is that there are a wealth of our own assumptions present.

“I’d ask Reggie how he wanted to get out of the hole,” sounds like a very empowering question to ask Reggie. But we don’t realize that embedded in that question is the assumption that Reggie is aware he is in a hole, and that he wants to get out of it.

In coaching and leadership, we call this “your agenda.” This silly little example of Reggie caught in a hole is a great way to see how subtle and well-meaning your agenda can be.

People often protest having their agenda pointed out to them: “But Adam, surely being in a hole is bad, and surely Reggie wants to get out of the hole!”

Yah, maybe Reggie does want to get out of the hole, but there are plenty of times when he doesn’t. And before we even get to whether or not Reggie wants out, inviting someone to get out of a hole is too many steps ahead if they don’t yet realize they’re in a hole.

Now let’s look at why getting someone out of the hole can be problematic.

Imagine that Reggie is aware he’s in a hole, and that he does want to get out it. In fact, Reggie is fixated on exiting this hole. So when you show up with your agenda (that he get out of the hole), it matches up with Reggie’s agenda. You feel like you can help him up out of this hole, and Reggie is adamant and enthusiastic that that is what he wants.

This provides us the opportunity to feel good about ourselves (because we are helping someone), and to feel useful. Huzzah!

But let’s create more altitude, and look at the bigger picture. Imagine that Reggie’s got a bigger pattern in life. The way the pattern tends to go is that he goes walking through his life noticing everything up in the sky, until he blunders into a hole. Once in the hole, he paces and complains and talks about everything he would do differently if only he weren’t in a hole, until he manages to get out of the hole, either under his own steam, or with the support of some well-meaning passer-by. Then it’s back to walking around with his head in the clouds, until he once again falls into a hole.

Once we’re aware of this bigger picture, we can see that helping Reggie out of the hole would just speed up his cycle through this pattern. In the moment, it feels like a relief to Reggie (“I’m no longer in a hole!”), and to you (“I’m not useless and I’m helping people!”), but it doesn’t actually shift anything for Reggie. It just repeats the same old pattern.

Finally, imagine that you can now see with this level of altitude, and you’re clear that helping Reggie out of the hole is just the next iteration of the same old pattern. Instead, you simply share with Reggie, “Hey, I notice you’re in a hole.”

Because of the way Reggie’s pattern works, he’s going to become more and more insistent that you help him out of the hole. That’s obviously what you’re supposed to do. At the same time, you recognize that helping him out of this hole won’t change anything. It will just make him more reliant on strangers helping him the next time this situation arises, and keep him operating under the same belief that the only reason he’s not moving forward is the hole he seems to be in. And further it’s only going to be a matter of time until he falls back into the next hole.

And so you sit there, standing for the possibility of Reggie discovering his own path and solving his own problems, while being empathetically willing to feel his frustration and suffering. Reggie gets more and more insistent that you should be helping him, and you feel more and more confronted by the fact that you’re not really doing much for Reggie.

Given enough time, and a willingness to sit with Reggie as he works through his own process, he will eventually start to try new things, take new actions, and start to see what he is creating with greater awareness — but only if you’re able and willing to stand by him and stay open-hearted in the face of everything that gets driven up for both of you.

It requires a lot of your own work to support people with this level of unattachment. The moment we see people caught in a hole of their own making, suffering, we collapse under our empathetic pain and our own need to feel useful.

Being a transformational coach or leader requires doing the really difficult inner work that allows you to trust yourself as a gift, regardless of what you are doing, so that you can simply be with people as they work through their own process and discover what will move them forward.

And that is work that will crack you wide open.