Some thoughts on setting goals. 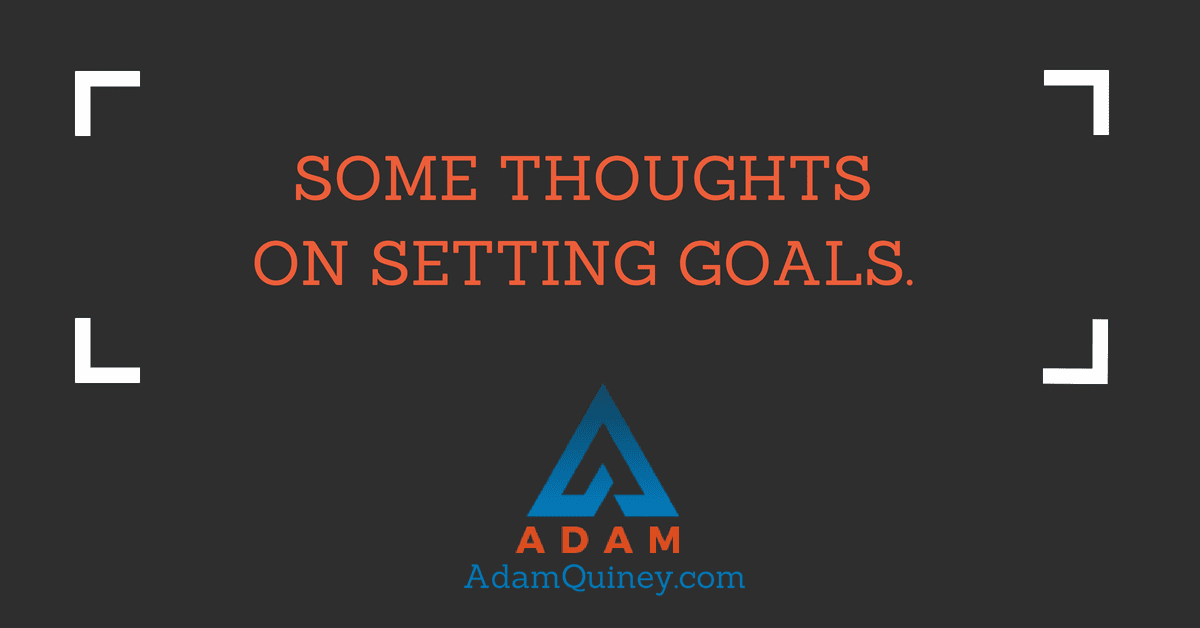 Most people set goals one of two ways.

The first way is to set goals that are labelled a “stretch” goal. Basically a goal that feels a little bit out of reach, but that you can still achieve. A stretch goal is a goal that you will predictably be able to attain. It’s not automatic — if you didn’t put any effort towards it, you wouldn’t achieve it. It will require something on your part, though not any significant shift or transformation in the way you show up in the world.

This approach is generally an attempt to set goals up that allow you to avoid having to be with the crushing judgment, disappointment, heartbreak and everything else that comes with our relationship to not meeting our declarations. You know the kind of judgment I’m talking about — you’re unreliable, flakey, your word isn’t good enough, you can’t be counted on, you’re a disappointment, a failure, you’re never going to achieve what you want, etc.

The judgment is not hard to find, provided you’re willing to look for it.

Because this judgment is so painful and so engrained in us, we tend to try to bypass it. We avoid setting goals that we really don’t think we can achieve, because we are unwilling to experience the discomfort that goes along with that perceived failure.

We also try to come up with fancy ways to describe our goals/projects/aims/whatever to avoid this feeling. We call them experiments, or projections, or nice-to-haves, or any other kind of contrived name. The intention, again, is generally to make us feel differently about our perceived failure.

The second way people set goals is to set impossible goals that they know they could never reach.

There’s two ways you can set an impossible goal. One can be one that is physically impossible to achieve (as far as we know it). Eg, “By this time next year, I will have flown around the moon, unassisted by any technology whatsoever, wearing a t-shirt and briefs”.

This kind of impossible goal is pie-in-the-sky and safe. Because it’s so obviously impossible, there are no stakes for you. There’s no risk if you fail. You already deemed it impossible to begin with, so you had no expectation.

Basically you sanitize your failure. It’s acceptable failure, instead of the kind of failure you’re aiming to avoid in the first type of goal-setting.

The other way people set impossible goals is like it’s a balloon they attach a message to and send off to the stars. It’s a goal that they would like to create, and something they are committed to having in their life (therefore, not physically impossible), but not something they actually put any real commitment to.

So you create a goal that you’d like, but then, because it still feels impossible, you don’t really devote much attention, intention, or commitment to creating that goal. It’s like an intention you shout out over the clifftops. Maybe it’ll make a difference. Who knows.

And that’s fine to create and [not] pursue goals that way — it just doesn’t leave you particularly empowered or powerful around your word, and manifesting it in your life.

Again, you’ve sanitized the pain of failing at your goal. If this intention you’ve shouted into the heavens comes true, great! What a nice bonus. If it doesn’t, oh well, you knew it was impossible anyhow, and eventually, it’ll just kind of come into your life. Project management by wish fulfilment, if you like.

(Are you ready for me to tell you the thing? This is the part where I’m going to tell it to you).

If you actually want to create transformation, it requires a willingness to set goals like that last kind I mentioned, and then actually commit to creating them. Generally speaking, this kind of approach is impossible on your own, because your context, perspective, and beliefs about the world are what actually make this goal impossible. You will require a coach, leader or mentor that is able to support you in seeing outside of your current world-view.

If you’re a CEO working 60 hours a week, with a goal to work 40 hours a week, while simultaneously doubling your company’s profits, that’s going to require seeing beyond your current paradigm (where the predictable, stretch goal is likely some flavour of increasing profits by 20% and maybe you taking an extra three weeks of vacation).

Most coaches and leaders are unwilling to stand for their clients and direct reports to create these kinds of goals, because you put it on yourself when the person struggles or fails. You make it mean something about your value as a coach/leader, rather than simply holding the space and supporting people to be with the discomfort of not yet having things figured out.

Impossible goals, when committed to, actually create the space within which transformation can occur. The foreground results that someone is declaring they will create provide a container within which all of the work aroundsomeone’s being can actually make a difference.

Doing deep ontological work (working with someone around their being) without any kind of foreground aim to be driven towards tends to end up being masturbatory. You can spend a million years working on your being and never actually create the tangible results you say matter to you.

Your level of impossibility is entirely your own. You don’t need to build a company from scratch while working 0.5 hours a month, while drinking cocktails on the beach. Maybe your impossible goal really is working five less hours every week. It can be difficult to tell without external support, because, again, you will naturally choose from inside your perspective. It’s almost unavoidable.

This kind of work requires courage. It requires a willingness on your part to actually fail to achieve what you say you will achieve. And then it requires the courage to allow people to see that, and to support you in creating whatever is next from here. Few people are willing to fail in this way, and so instead, you create stretch-goals and pie-in-the-sky goals that don’t really create anything new in your life, aside from incrementally improving it.