Surrender to the Breakdown 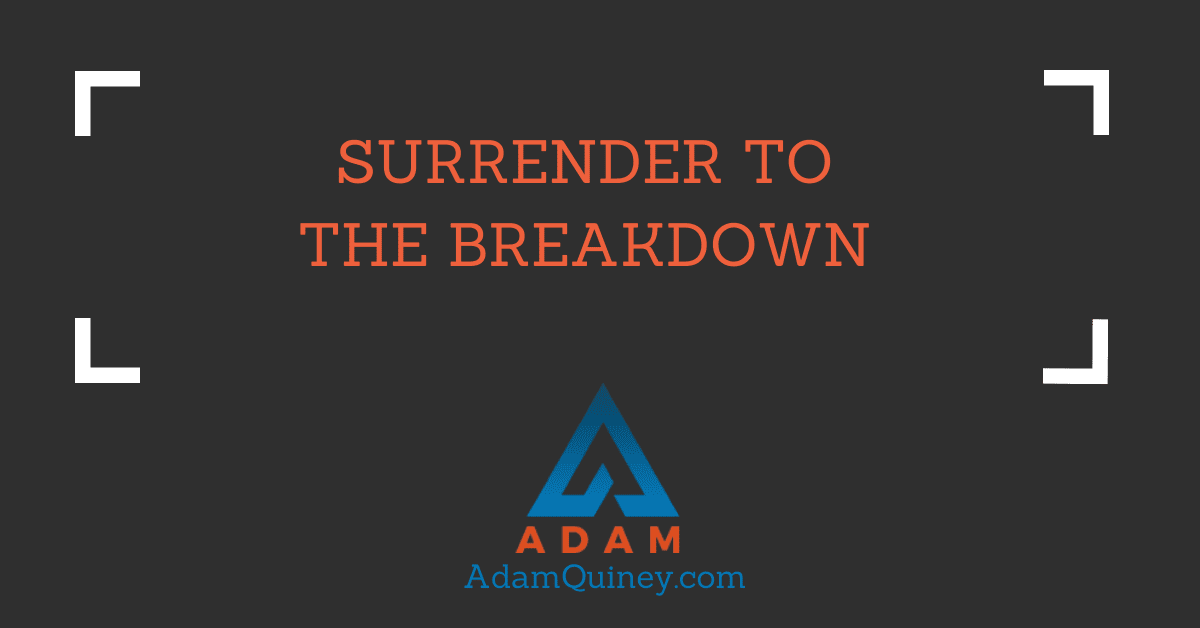 I’m inspired to write a lot about fear these days, because that’s such a big part of what COVID19 is demanding we be with.

There’s a lot of strategies that we adopt to deal with the “problem” of fear. I put problem in quotes, because fear is only really a problem if we are holding it that way. If you were to relate to fear the same way you relate to having hair, then you wouldn’t really need to do much about it other than feel and experience it when it’s there, and move on with whatever else there is to do when it’s not there.

Analysis and judgment are common approaches to our fear, as is wallowing. Wallowing is doing things like obsessively checking the news, reading social media, and feeding yourself an ongoing stream of anxiety. Other strategies include fixating on things like work, numbing out with things like TV and substances, researching solutions to problems, making money (or amassing whatever other type of totem represents security for you), and bypassing the fear entirely with positive thinking.

I’d suggest letting go of ranking these strategies or trying to determine which is the best one. It doesn’t really matter, because they’re all just variations on the theme of avoiding our fear, and consequently, avoiding being with the fullness of our humanity.

When things are going well, people can dole out advice and tell you what to do, paste positivity over top of the mild fear that is present, and it kind of looks like it’s working. When things are on the up, you don’t really have to do that much, and they just kind of … keep moving forward.

When a world-changing event like COVID19 (and ten years before this, the Great Recession, and ten years before that the Dot Com bust, etc.) hits, suddenly all of these strategies are stripped bare. You can no longer rely on platitudes, positive-affirmations, and avoiding your fear to get by.

The strategies that have been used to contain and let us avoid feeling everything that’s there for us, are simply unable to cope with this much of our humanity being kicked up at once.

It’s similar to the impact on our medical system. Our medical systems are not really set to cope with the incoming baby boom generation as it ages and puts an increasing strain on an infrastructure that is already taxed. But for the most part, things have been going fairly well, and we can kind of turn a blind eye to that fact. We can hope bad things don’t happen to us, and as long as they aren’t, we can spout positivity and turn away from a looming problem.

But now COVID19 is here, and it’s demanding that we open our eyes. It’s demanding that we pay attention, and surrender to the breakdown, rather than trying to operate over top of it or avoid it altogether. Only by acknowledging and accepting that breakdown, rather than trying to bandage and fix it back up, can we create the breakthrough on the other side.

Transformation only ever happens this way — we need to allow a breakdown to happen before the breakthrough can occur. As long as we’re resisting the breakdown, we’re still operating inside the existing paradigm, and consequently, it’s impossible to create something new. You can’t create something outside of the box, from inside of the box. (This is why in-house coaches, for example, rarely create much transformation, and why we generally aren’t able to create transformation by ourselves).

When you hire a coach or get supported by a leader, you’re empowering someone to stand by and support you, as you willingly create a breakdown. That takes some real guts and gumption, and you really need to see what’s available on the other side (because otherwise, what’s the point? That would be like running into a brick wall simply because “it’s a good thing to do”). It can be challenging to willingly create a breakdown that way, because our fear keeps pushing us away, in the opposite direction. The benefit of this approach is that you get to be at choice for where you’re creating a breakdown — hopefully in a place that is aligned with some kind of breakthrough you want to create.

Events like COVID19 take away our choice. The time for waiting is over and the breakdown is here. RIGHT NOW. Our medical system is up against a breakdown, and so are the ways in which we bypass and avoid being with our fear and our humanity. Our strategies don’t work, and what there is to do is to surrender to that fact.

What a lot of people are doing is holding on and trying to wait things out. Hoping that they return to normalcy. But we’re seeing that that isn’t likely to happen any time soon. We came back from Palm Springs and entered into self-imposed isolation for two weeks, but what are we going to do when those two weeks are up? Go out to parties? No, we’re probably going to continue working and living this same way, and that’s likely to continue for the foreseeable future.

What if things won’t return to “normal”? What if all there is for us to do, is be with how things are right now, and surrender and release any idea about how they will be two weeks from now.

If this was what the world was going to look like from here forward, what would you take on? How would you show up as a leader, in this new paradigm that is unfolding?

What do you see there might be here for you to step into? What are you being called to lead us toward, in this new paradigm?