The Cost of Resolving Dissonance 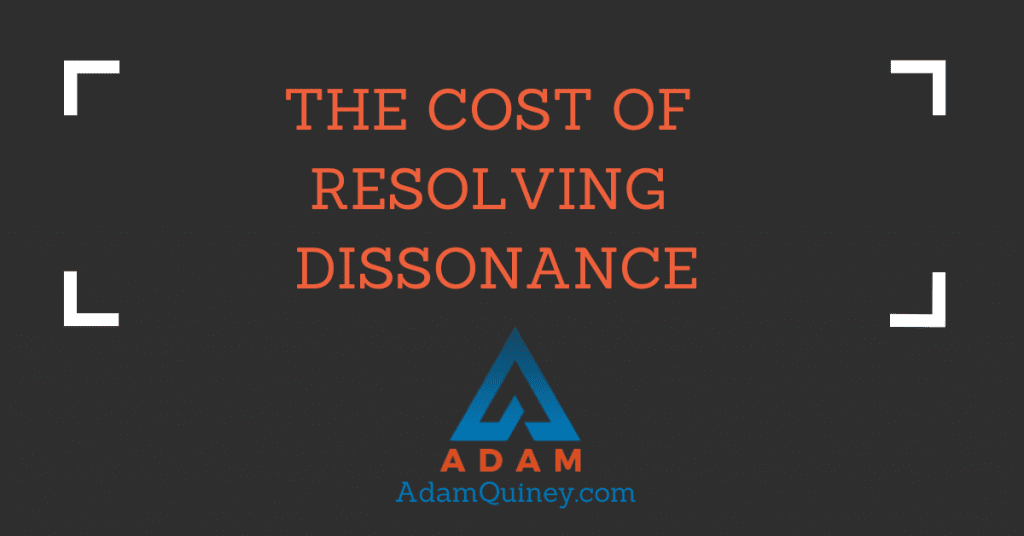 The beliefs and perspectives you have about the world around you are fully-formed and self-consistent.

That means that there aren’t any gaping holes in the way you perceive the world, just waiting for a new perspective or idea to fill them in.

If you believe that you have to work hard to make money, then that perspective will also include a bunch of ways to handle exceptions.

That person over there that seems to be taking it easy AND making a bunch of money? They must be lucky. Or they’re a cheat or a thief. Or they are a trust fund kid.

This is the way humans work. This holds true not only for the way you relate to and experience the world around you, but even in the way you physically see.

Your eye has a blindspot, where the optic nerve connects to your eyeball — but you can’t see that. Your brain fills it in. It renders the image your mind works with into a fully-formed, complete image. The same is true for your beliefs.

We have to trust that we have a blindspot. Trying to “see” it is impossible — by definition.

So, the upshot of this, is that anytime you’re presented with some belief, some situation, some evidence for something that exists outside of your prevailing worldview, it’s going to clash.

If you hold that belief that you have to work hard to make money, and then I show up, not working hard, making money, and suggest that the same is possible for you, this is going to create what is called cognitive dissonance.

Cognitive dissonance is the experience we have when our fully-formed and self-consistent worldview clashes with a new idea. If part of your worldview is that all Republicans are racists, or that all Democrats are snowflakes and hypocrites, then you’re going to experience some dissonance when you encounter someone that identifies along those political lines, but doesn’t seem to exhibit those tendencies you hold to be true.

Cognitive dissonance leaves us feeling up-ended and ungrounded. Kind of like the floor has fallen out from under us. If our beliefs provide us a degree of certainty and understanding about the world, then having something that doesn’t align with those beliefs takes away all of that safety.

When we’re confronted with cognitive dissonance, we try to resolve it. The easiest way to resolve it is to try and find a reason why what we’re presented with fits inside our already prevailing worldview. If this Democrat you’re talking to doesn’t seem like a tender snowflake, then you’ll listen to see where, in their life, that actually DOES hold true. Phewf. Now you can go back to the worldview you had. It’s not that Democrats aren’t snowflakes, it’s just that this one in front of you is a little more nuanced in how they show up that way.

And you don’t even have to stop spending time with this person. Hey, being a precious snowflake isn’t even bad. You’re woke. You’ll spend time with all kinds of people.

What matters is less your actions, and more that you’ve now resolved the dissonance you previously experienced.

Resolving your cognitive dissonance eliminates the discomfort you feel when your worldview and beliefs are confronted. Resolving dissonance isn’t bad per se, but it has payoffs and costs. As soon as you resolve the discomfort of having your beliefs confronted, you can go back to operating inside of them.

The payoff to resolving dissonance is that you get to return to being right about how you perceive the world. You get back that feeling of rationality, and understanding how the world works, and from there, a sense of safety.

The cost of resolving this dissonance is that it will deny you the opportunity to transform. Transformation is ultimately about having your existing beliefs confronted, and then surrendered, in order to create a new, larger belief, that allows for a wider range of possibilities than the one you currently hold. The cost of a process like that is that you’ll feel like what you know to be true no longer makes sense, and that’s going to create a temporary sense of a loss of safety.

None of this is what you should do. Those costs are real, and not to be taken lightly. It’s simply a place to start looking, if what you’re committed to is transformation in your own life, and that of others.