The MASCULINE AND FEMININE — A Primer, Part 1 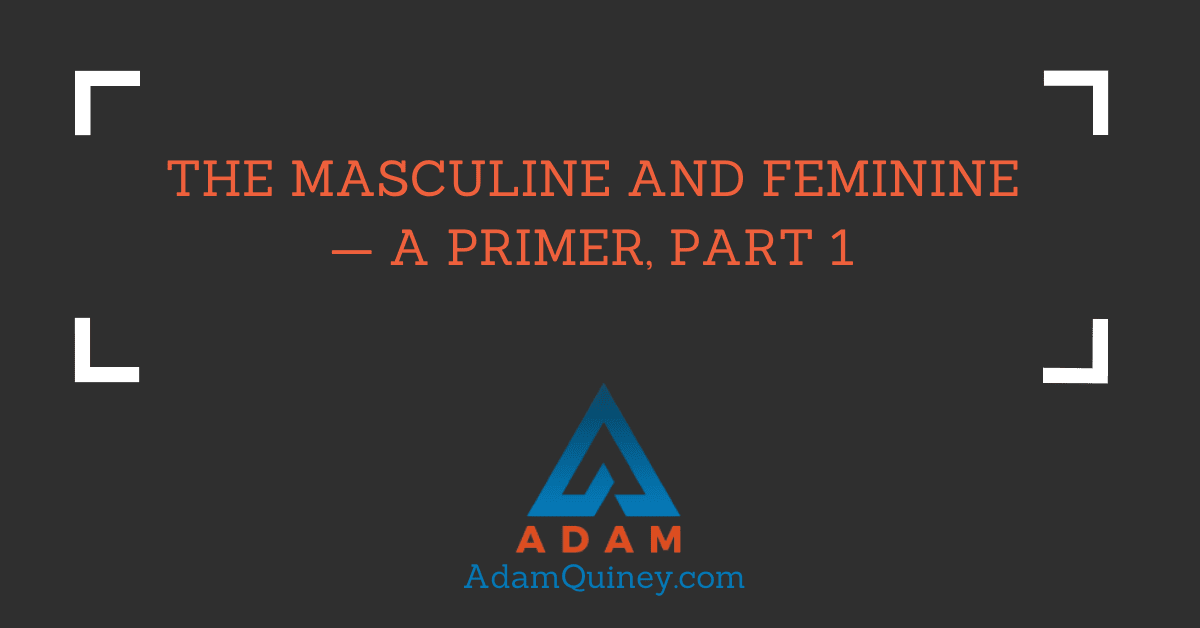 The genesis for today’s post, if you’re curious, is at the bottom. That way, I can just get straight to the good shit. No prefacing here people, we’re all about the postface.

The Divine Masculine and Feminine energies, are two archetypal forms of energy. The first thing you’re going to have to do is unhook yourself a little bit from the concepts of gender, when we speak to these two energies.

When people see the words Masculine and Feminine, they think what we’re talking about is that Men are this way, and Women are that way. We’ll come to more on that in a bit, but for now, try to simply notice that showing up for you, and do your best to set it down.

When I describe an energy as archetypal, I mean that it goes beyond even the notion of something physical you could point to. These are archetypes of how the universal energy in our … universe, is set up. That’s a bunch of words that kind of sound like they mean something. What I really mean is that you could say the Masculine and the Feminine energies exist even before our universe came into existence. They’re not even primordial, because that would suggest they came into existence in the early stages of the Universe. By archetypical, I mean these energies are almost behind the beginning on the universe.

But you don’t have to worry too much about that, unless you want to brain yourself open to god thinking about it. Instead, let’s just talk about these two energies.

Most of the universe is continually in a dance between these two energies. That dance is what has the universe exist. Imagine a river. The banks of the river are the Masculine. The banks are still. They do not move. They hold the river, and guide the flow of the river.

The water of the river is the Feminine. The flow of the water, rushing along the banks, sloshing up against the sides, and travelling with all of the force of gravity and the water’s momentum towards wherever the banks lead it.

It is the dance of these two energies that creates what we call a river.

Some other examples of this dance at play are:

The dance between these two energies is what we are speaking to when we refer to polarity. I’ll talk more on this, but for now, it’s time to bring these concepts into a conversation about our genders.

I’ve been writing on the topic of the Divine Masculine and Feminine energies for a while now, which is a little edgy for me. It’s edgy for a few reasons — while I’ve got plenty to say, I don’t feel that I’m quite as deep in this subject as many of the other things I write about. I know that teaching can be seductive, and I’m loathe to put myself out into the world as an expert of any kind.

Finally and most significantly, it’s edgy to write about concepts that are so easily mistaken and misappropriated. If I write about how it is in the nature of the Feminine energy to submit to the Masculine energy, that is automatically going to drive up a lot of resistance, upset, and differences of opinion. It’s also going to drive up a bunch of people that take what I speak to, misunderstand it and (innocently) misappropriate it for their own agenda. People at an early stage in their practice may take that to either justify their own subjugation of women, or their fight against toxic masculinity.

Where that leaves me is often simply withholding what I am called to write and speak on, or prefacing and caveating the living hell out of it. Add to that my tendency to be a little long-winded in what I have to share, and the feedback from many people that they love a shorter post from me, and it is one heck of a shemozzle to sort through.

I was having a conversation with my former-client, member of THE Intensive’s leadership team and all around rockstar, Kelly Childress, and she offered that she would really love some kind of primer that I could point back to on these two energies for people that really wanted to know more. Basically a primer, or part of the Quiney-canon, that I could refer people to. So, that’s how this post came about.

If you have feedback on any of this — I welcome it. ♥️