THE ONTOLOGICAL MODEL FOR DIS-EASE (PART 2) 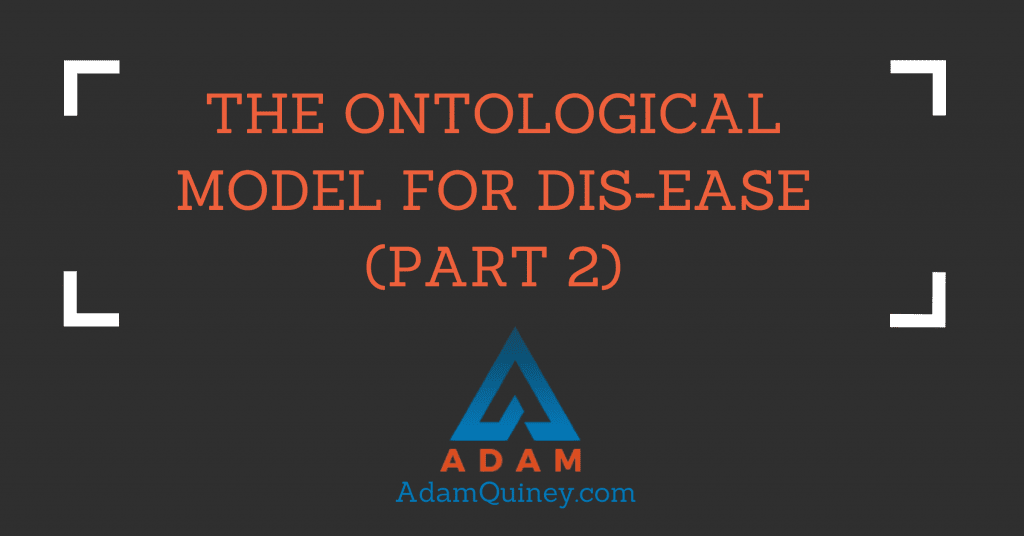 This is a five part series on how we currently relate to the model through which a lot of our disease is treated is one that largely operates with external factors, and holds disease as separate from the person in which it arises. This post is part 2 of 5.

The ontological basis for disease is rooted in a deeper look at what’s going on, and looks at disease (or dis-ease) as a symptom of the underlying system, rather than something that is wrong being introduced into a system that was already working perfectly.

From the ontological perspective, we look at dis-ease through the lens of how someone is being, and see dis-ease as an extension of that.

So, for example, let’s imagine someone named Reggie, who was raised by an abusive, alcoholic parent.

For most of us, childhood is an experience of pushing out into the unknown, exploring that which is not yet safe, and then returning home to the safety of our parents.

The safe space that our parents create for us allows us homeostasis, and an opportunity to regulate ourselves. It provides us with a baseline to return to — a safe reference point, if you like.

For Reggie, however, there was no safety at home, and life was in a continual state of upheaval. While most of us pushed into a lack of safety beyond our homes, and then returned to reintegrate, Reggie had almost the opposite experience. There was nowhere to integrate. In fact, there was nowhere safe at all. Home was the greatest, most dangerous place for him to be. Reggie couldn’t sleep, he couldn’t rest. Reggie needed to remain vigilant, and constantly on guard.

This is not a flaw on Reggie’s part. This is the brilliant adaptive mechanism by Reggie’s system to create a way of being that allows him to survive.

Survival is a short-term (and maybe medium-term) perspective. Reggie’s system is not really focused on the mid- to long-term consequences of his choices, because it can’t be. He needs to learn how to survive a violent, abusive, unsafe environment, and get through to the next day.

So, in terms of Reggie’s being, here are some of the truths or facts about it:

Now, if you imagine this as a way of being, you can also start to imagine what that way of being would look like throughout the system. What would the way of being of an immune system look like, given everything described there?

We might start to see a lot of auto-immune diseases. We would see an immune system that can’t distinguish friend from foe, or even if it can, can’t trust what seems safe. Better to strike first, rather than lie passive and regret it later.

You can imagine a whole host of symptoms that would arise out of this particular way of being, and if we wanted, we could group these up into categories of diseases.

Rheumatoid arthritis might be one of the more significant symptoms that we could expect to see — where the immune system is attacking the functional scaffolding of ourselves, unable to trust that it’s there for the benefit. On a less severe scale, we could also see this showing up as something like allergies — a hyper-inflated response to a perceived threat, even if there’s no actual risk to the system.

(With allergies, it’s the immune system’s response, rather than the triggering agent, that’s the real threat.)

Reggie will go looking for fights, because at least then he knows what’s coming at him — when things are calm and peaceful, the lessons he’s learned tell him it’s only a matter of time before he’s under attack.

From Reggie’s developed way of being, it’s better to be in a fight you can see coming, than to get blindsided because you let your guard down.

Sure, there are side-effects to making your immune system dopey — like you may be at a greater risk to other illnesses, or other parts of you may also feel dopey (it’s hard to target just one part of a system through medication). But, if this is the only solution we have to the problem that ails you, it’s probably better than nothing.

The problem is that we’re targeting a solution at the symptom of the problem, rather than the root. From the ontological basis of dis-ease, we would look to address the way of being that is leading to the particular problems showing up.

If someone has learned that everything around them is unsafe, that’s the place to begin the work.

You can read the next entry in this series here.