THE ONTOLOGICAL MODEL FOR DIS-EASE (PART 3) 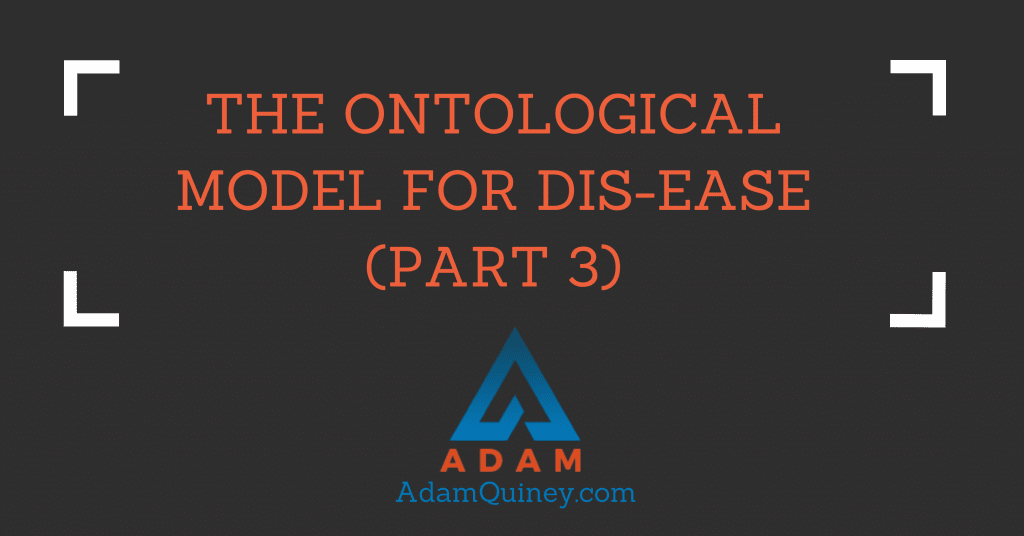 This is a five part series on how we currently relate to the model through which a lot of our disease is treated is one that largely operates with external factors, and holds disease as separate from the person in which it arises. This post is part 3 of 5.

The ontological model and approach isn’t to suggest that there aren’t external entities that create dis-ease within us.

When you blunder into a hole and break your leg, simply learning how to stop falling into holes won’t resolve the fact that you have a broken leg. And in fact, if you don’t get support to mend the broken bone, you’ll end up causing more harm in the first place.

And sometimes, you’re just going about your business and a baseball gets hit out of the park beside you, strikes you in the shin, and breaks your leg. Sometimes, problems really are caused by external factors.

It’s not that the old model should be thrown away, rejected or dismissed entirely. We simply need to create a bigger model for what we are confronted by — a model that can allow treatment and healing on not only the short-term, but also the medium and long term. A model that assesses what ails us from the symptoms all the way down to the root of the issue.

The ontological model doesn’t supplant or replace our existing model. It’s simply an expansion — a larger model that includes and allows space for our existing solutions, but also other options and approaches as well.

Inside this shift, treating the symptoms is essential — it’s just no longer the only place that we look, and consequently, we can support healing that goes deeper.

Solving things on an ontological level requires training people with the capacity to see and distinguish how someone is being, underneath what they are doing.

When someone currently goes in to see a medical practitioner, they are asked questions like “How is your sleep?”, “How much water do you drink?”, and so on.

These are important questions, but they don’t get at the heart of who or how someone is being in their life. They look at some of the actions someone takes that would probably pertain to the quality of their sleep, over top of their being.

You staring at your phone for an hour before you close your eyes may well impact your sleep. There’s good scientific research that suggests the blue light emitted by our phone screens keeps our bodies awake for longer and impacts our capacity to sleep. If we’re unaware (or unable to see) any other factors present in someone’s life besides their tendency to use their phone before they go to sleep, it would be reasonable to assume that the insomnia they suffer is likely caused by their phone use.

But, what if this person has an underlying, internal story about themselves that they are worthless unless they are actively working in the company they own. In the early days, they had less responsibility, and so this story didn’t have a lot of impact. But now they’re the leader of their company — their story’s impact is greatly magnified.

From this story of worthlessness, a couple of things happen.

First, they put more and more attention on trying to get everything done that they can. From their internal story, everything that remains unfinished is a bright light indicating how worthless they are. Each unaddressed e-mail, every text message, every voice memo — all of it — is a testament to how they aren’t earning their value (at least, from inside the context of their story).

To compensate, their life becomes a quixotic quest to accomplish everything outstanding.

Second, their phone’s role grows to fill two purposes: it gives them something to numb out on and put their attention towards, separate from work. As long as they’re crushing little gems in Candycrush, they aren’t thinking about all of the little bright lights pointing out their worthlessness. Additionally, when the pain of not getting things done becomes too great to ignore, their phone provides another way to resolve that issue by getting some work done.

Their phone-use before bedtime is not causative of their poor sleep and insomnia — it’s correlative with it — both the poor sleep and the phone-use are symptoms of the underlying story of worthlessness.

We could tell someone to knock off the phone-use, but it’s not really going to help them with their sleep. It might create a brief, short-term impact, but very quickly, the void left by removing the coping mechanism is going to have the disempowering story’s volume turned up even higher. When a habit is a coping strategy for an underlying issue, removing the habit without addressing the underlying issue will just have a different coping strategy introduced to fill its place.

You can read the next entry in this series here.