THE ONTOLOGICAL MODEL FOR DIS-EASE (PART 5) 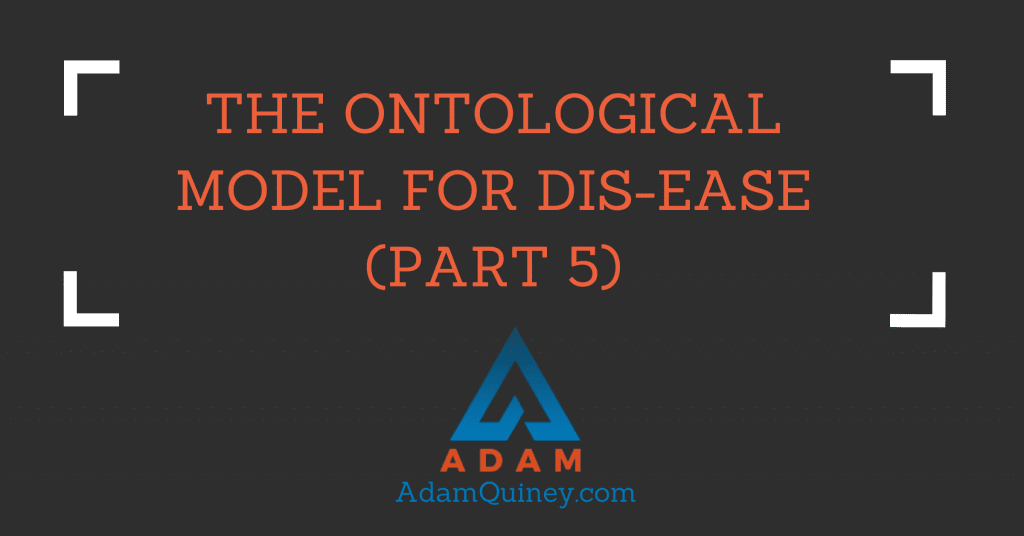 This is a five part series on how we currently relate to the model through which a lot of our disease is treated is one that largely operates with external factors, and holds disease as separate from the person in which it arises. This post is part 5 of 5.

——
How do we shift from the current model to a deeper, ontologically-based model?

The answer is complicated. Remember that we have little capacity to sit with our problems, and have a tendency to rush towards a solution. That same tendency shows up when we’re presented with the “problem” of our existing model.

When things aren’t going well, we feel we should jump to the next solution. We could react to the way things currently go by eschewing professional support, insisting on homegrown wisdom based on our own beliefs and unconscious biases, and stop treating problems as they show up. Basically throw out the existing model altogether.

To grow into a broader model, we need to engage with training, coaches and professionals that can go deeper than the solution we hope for on the surface.

Our training programs need to shift from an approach that puts attention chiefly on an educational and informational model, to one that spends the majority of its time focused on transformation.

Information and education are safe bets, and avoid the confrontation that makes transformation so challenging. They provide immediate value and give us an immediate feeling that we’re moving forward.

Transformation, by contrast, requires leaders that can lead you into your resistance and then stand with you as you fight, struggle, resist and eventually, surrender to what’s available next.

Using the earlier example of scarcity about money, an educational approach might teach you how to make more money, what a scarcity of money creates, what things other people with money-scarcity have done in the past, and so on. All of these angles are interesting and educational, and none of them will actually create transformation.

A transformational approach has the leader begin by sitting down with the person that wants to overcome this issue, and get clear on their vision for life beyond a fear of money. If they knew that money was truly abundant, what then would they be creating? The attention and focus are shifted away from avoiding the breakdown (the fear about money running out and avoiding that possibility), and instead, to the breakthrough.

Then, the participant works to create that vision for the future they want. They put their attention on creating the breakthrough, and in doing so, inevitably come into a clash with the breakdown. Rather than get better and better at avoiding their fears about money, instead, we support them to land right in the middle of them.

This is uncomfortable and likely to bring up resistance, defensiveness and blame. (It’s not uncommon for the participant to blame the leader at this point, insisting they are the reason they’ve come into the heart of this particular breakdown).

Only in coming into confrontation with what they’ve spent their life avoiding can someone develop new ways of showing up and actually discover their own resourcefulness and capacity to deal with this fear (rather than become better and better at avoiding it).

On the other side of confronting the breakdown, the participant discovers that they are actually able to deal with the thing that they’ve spent their whole lives avoiding. And once they’ve reached this point, they no longer need to expend all of the energy they’ve been putting towards avoiding this breakdown ever again.

The participant doesn’t make a pointed effort to “set down” their habits and strategies around money. Those habits just naturally fall away or dissolve, once the issue they were originally created to address is no longer present.

And, from this place, you become very clear in your seeing of other people when they are attempting to outpace their own fears about money.

Transformational work is much harder and requires more patience, training, and capacity to hold space for. It takes time, compassion, and a new approach to working with people.

The paths that lead us to more transformational work are currently ontological coaching, leadership, deeply transformational therapy (that requires the therapist to do their own work on an ongoing basis) and various indigenous practices, including plant medicine work.

For now, I’ll leave the solutions in this general realm. As the world shifts its attention and intention away from information and education to approaches that are more transformational, we will start to see the rise of solutions that treat humans, and over time, the whole of humanity, at a more holistic level.

As we deepen into these approaches, so too will our capacity to heal ourselves and mature beyond our current paradigm.