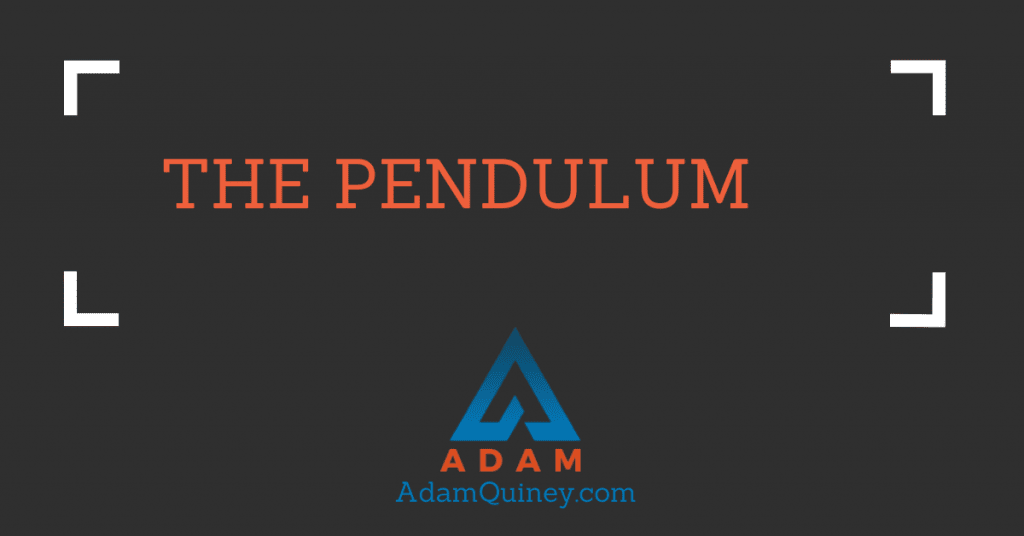 I was getting interviewed on the Adventure Effect podcast the other day, and we got onto the topic of pendulums.

From a physics standpoint, I always found it interesting that a pendulum represents an energetic system in a state of balance. Even if the pendulum swings wildly out to one side, it will compensate and inevitably find its way back to the other side.

Newton’s third law says that every force has an equal and opposite counter-force. My physics teacher in high school, Mr. Hannay, illustrated this law using the example of three sumo wrestlers inside a spaceship, running full-force and slamming into the front wall of the spaceship to propel it forward. The problem is that for them to get up to speed and hit that wall, they have to push off of the floor of the spaceship with their feet, and that is going to propel the spaceship backward in equal and opposite counter-measure to the amount they push it forward when they hit the wall.

This is the main reason we don’t have sumo-wrestler-powered rocket-ships.

(Sidenote: I got into trouble with Mr. Hannay for scratching the words “GWAR RULES” into my desk at the back of the class. Before he’d graduate me, he required that I go and buy some sandpaper and varathane, and restore the desk. Newton’s third law in action!)

Having said all that, if you imagine yourself sitting on a swing set (a classic pendulum), you already know that, without touching the ground, you can accelerate yourself forward simply by rocking in the swing. You’ll get a nice high back-and-forth action going on.

For both the swing set and the sumo-wrestlers inside the rocket-ship, there is no net new, external energy put into the system. For every meter higher you are able to rock yourself forward on that swing set, you will inevitably rock a meter high in the other direction, at the end of the pendulum’s swing.

Even though the system of the pendulum can rock higher and higher, swinging out further from its point of rest, it still remains perfectly balanced.

Humans are like pendulums. No matter how wildly you are swinging out in one direction, you’ll be simultaneously balanced by your tightening of control in another direction. Someone who has no ability to allow or even own their anger in some part of their lives (like, say, their work), will have other places where it will be expressed explosively (like, say, their road rage, or internal self-talk).

Made even more simple, if you held your breath in certain areas of your life, we can guarantee you’re going to be gasping, or at least breathing much more heavily in other areas.

Balance is always maintained. It’s certainly true that you may not feel balanced — the higher you swing, the more wildly out of control you may feel. The point is that your actions in one direction will be met with a compensatory set of actions in the other.

This isn’t the balance most of us are striving for when we talk about wanting “more balance in our lives”. But it’s balance nonetheless.

This doesn’t mean that transformation — lasting change — isn’t possible. But it does mean that creating it all on your own, inside the closed system of your own knowing, doing, and thinking, is a bit of a setup.

It’s worth noticing the places you try to make sweeping changes, and considering the corresponding backswing on the pendulum that may occur in other areas of your life, organization and business.