THE POSSIBILITY YOU SEE IS THE LEADERSHIP YOU CAN DEVELOP 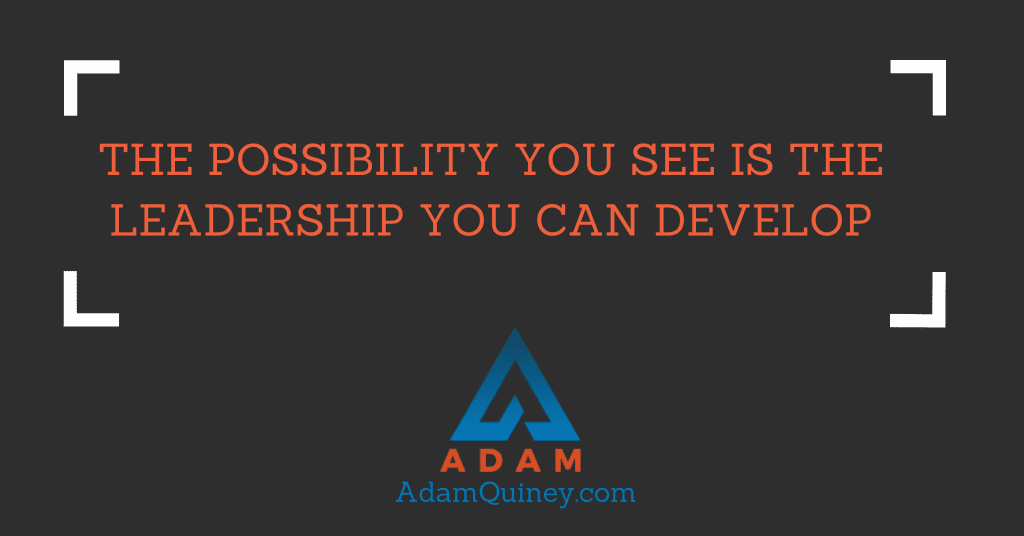 Let’s imagine you ask Reggie what he really wants, and he tells you that he wants to sell his company for forty million. Reggie also shares that, in order to do that, he’s going to have to drive his staff to work harder, let them believe they will get stock options, and then, at the end, have the company bought out and the employees stock options diluted to the point that they are worth very little.

Why do you imagine someone would set that as their goal?

Most of us immediately jump to labeling Reggie: well, he’s doing that because he’s greedy, and he doesn’t care about anyone else.

Okay. That might be one of the reasons. That’s certainly a possibility, and it definitely aligns with the knee-jerk judgment we have of that kind of behavior.

The trouble with that approach is that you’ve eliminated a significant number of people from the possibility of developing leadership (and remember, that’s part of your job as a leader). Anyone that gets tarred with the greedy-brush is no longer a candidate for leadership. At best, we manage around them and try to nudge them in the right direction (which is actually detracting from their leadership, rather than developing it).

Here’s what I assert:

People choose a result and a path to get there like Reggie has because that’s the only way they can see to achieve what they want. They want forty million, because they believe that will give them whatever experience they’re after.

And they’re going to create that forty million by causing a lot of hurt, because that’s the only way they can see to achieve that result in a way that meets all of their other needs.

If Reggie could see both the possibility of having his company bought out for forty million by lying to and disappointing all of his employees, AND he could also see the possibility of getting bought out for forty million dollars in such a way that left his employees feeling incredibly valued and put more money in their pockets, which do you think he would choose?

Like, if both options really occurred as equally viable to Reggie, which do you think he would actually choose?

Reggie would obviously choose the option that left everyone better off.

We choose options that leave other people hurt, worse off, or cause pain either because we’re unaware of our impact, or because we can’t see any other option to achieve what we feel we must achieve.

Consequently, the harm we cause is either a lack of awareness, or a lack of capacity to see possibility.

And the fear that you have, in considering the possibility of allowing other people to step into leadership and choose whatever goal they want, is actually a function of your own lack of ability to see possibility.

What we are unable to see in our own lives becomes the frame through which we see everyone else, and the limitation to the amount of leadership we are willing to allow expressed in the world.