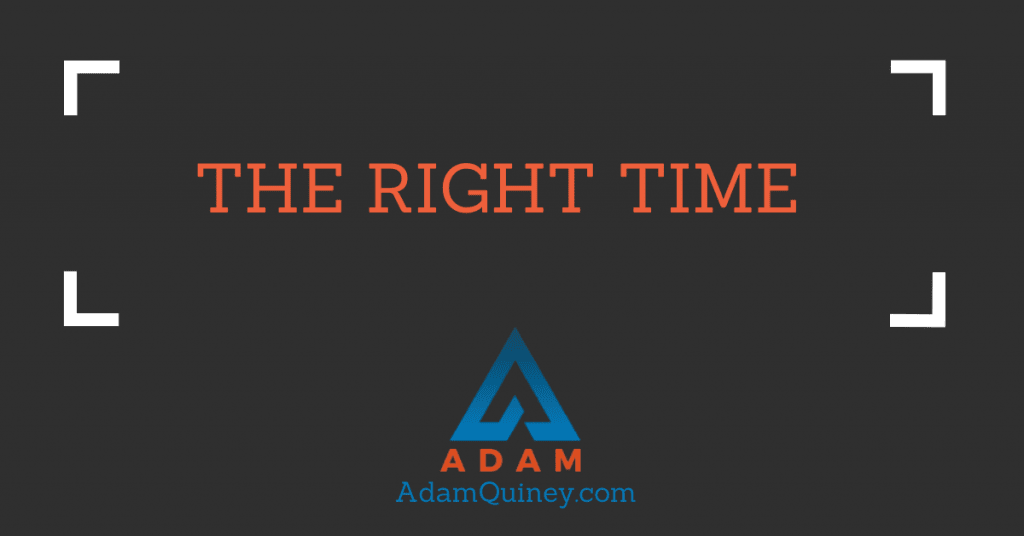 Waiting for the right time is the game.

Usually when people are staring at the possibility available through transformation, the right time becomes one of the things that gets in their way.

Life’s been going the way it’s been going for a while now, and you know it’s time for a change. But it’s just not… the right time yet.

But if you’re wanting to create something in your life that really can’t be created from the existing model you operate in, waiting for the “right time” is just going to ensure you’re stuck in the same pattern.

Here’s a simple example. Imagine the beliefs and stories you have about you and the world are leads to your life following this pattern:

This is ridiculously simplified, but you get the idea. Lots of people operate with some degree of this kind of pattern in their lives. There are benefits and costs to this pattern. Some of the benefits are that when a fire shows up, you get to feel productive, and you get to put your problem-solving skills to work.

One of the costs to this pattern is that whatever you say you’re really committed to in your life tends to keep getting derailed by the immediacy and urgency of the fires that show up in your life. This might also be a secret *BONUS BENEFIT* , as it saves you from having to confront the fears that are standing between you and what you say you are really committed to.

Inside this pattern, people don’t usually reach out for support during step 1. Life is pretty decent — it’s like an 8/10 across the board. Good, not great, but hey, why rock the boat?

Then a fire shows up, and if it’s been a particularly rough year (like say, during a pandemic), and the fire feels particularly big, this is the point where people might actually open themselves up to the possibility of transformation. They reach out and get into a conversation with someone that support them in having things go radically different.

But things going radically different also means that the safety of putting out those fires (and not having to confront the fears in the way of what you say you really want), is going to be scary. And so when the fear starts to show up and make itself known, it becomes a lot easier to put attention back on the fire.

“Hey — things are a little hot over here, you know? I’m just going to put out this fire before I take any action. It’s just not the right time.”

So, the fire gets put out. And that feels kind of good. It’s a reminder that you’re not useless, and you have good fire-putting-out skills. And maybe… actually, maybe you can handle this.

And now that you’ve returned to step 1, things don’t feel so bad after all. You remember how bad it felt when you were on fire earlier, but that’s passed now. So maybe… actually, maybe you don’t really need that transformation. You know what? Let’s just hang out here for a while and catch our breath.

And now, waiting for the right time has really just put you back into the same pattern as before.

This doesn’t even mean this pattern is bad — it’s just that, like every pattern, there are some things you will be able to create in your life from your existing patterns and beliefs, and other things you won’t. Whatever it is that you say you want in your life, but perpetually just don’t seem to be the right time for them? This pattern is in the way of that.

And waiting for the right time is just going to keep them forever just out of reach.

There’s never a “right time” for transformation, because the right time is a function of your existing pattern.

The right time is ultimately simply a matter of a courageous choice on your part to stop waiting for the right time.

That’s the moment when your life begins to transform.