They Hear Who You’re Being First 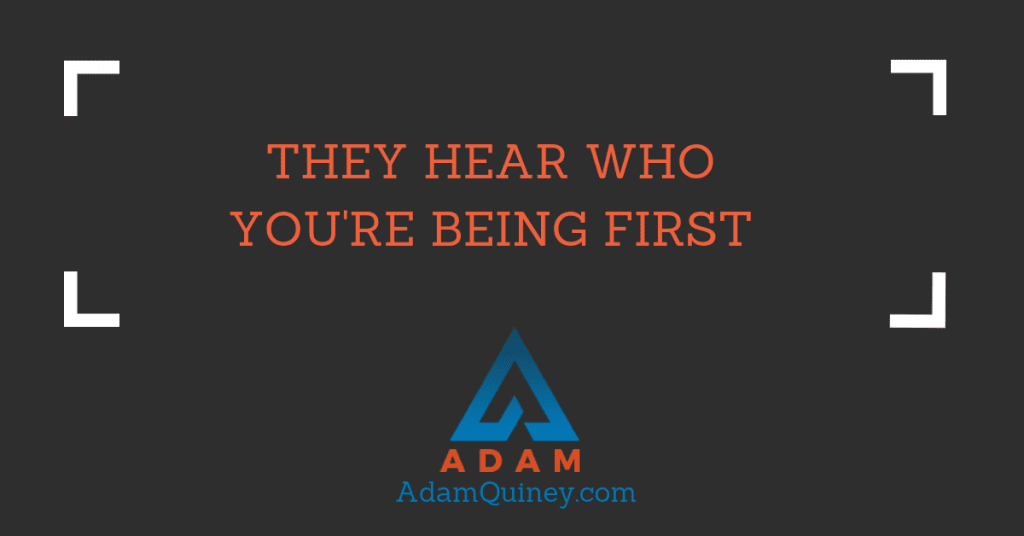 “So, there are a few things that I want to make happen. First, I’d like my company to start paying for a portion of me doing this work. We talked about this at the start, but I feel I can stand behind it now. I’m creating shifts, and I think they should be footing some of the bill. Second, I’d like to get my leadership team on board with you coming and working with us regularly.”

Jonathan waited until Dennis was finished before speaking. “Okay, that makes sense. So it sounds like you’re feeling good about the work you’ve been doing, and want to, one, start having the company pay for a portion of it, and two, have the rest of your leadership team come on board and begin doing the same kind of work. Do I have that right?”

“Okay, clear. So help me get a sense of where we’re at. Have you tried to have any of these conversations yet? If so, how have they gone? If not, what’s getting in the way?”

Dennis paused and thought. “Well, up to this point, I’ve kind of dropped hints. I’ve mentioned what I’m doing off to the side, hoping that people will take an interest and ask me more about it. But they haven’t really. It’s like they’re not that interested, and so then I don’t push any further.”

Jonathan sat with that before asking his next question. “Okay, that makes sense. And so, let’s just start right here: what can you distinguish about who you’re being around this?”

Dennis was mostly used to this kind of language by now, but asked Jonathan to clarify all the same.

“Thanks for asking Dennis. What I’m really asking is ‘how do you notice you’re being’ when it comes to sharing about the work you’ve been doing?”

“Ah, got it. Hmmm. Well, I think I’m being pretty timid. Like…” Dennis hesitated before continuing, “Ha, okay, I’m being like a guy that wants to ask a girl out, but is afraid she’ll say NO, so he just drops these really loose hints. Certainly not powerful. I’m being timid, and almost like … ummm… Like I’m wrong for bringing this forward.”

Jonathan loved Dennis’s metaphor. “Ha, what a great metaphor. Okay, perfect, so you’re being timid, apologetic, weak. Anything else you can see?”

Dennis thought some more. “I think I’m being kind of righteous about it too. Like, I’m not sharing that so much, but it’s there. I feel like people should be asking me about this, and they’re not, and that is wrong and dumb of them.”

Jonathan laughed. “Why do people gotta be so dumb, right?” Dennis laughed with him before Jonathan continued, “Okay, so, from that way of being, what kind of results is this generating? How are people responding to you, what do you notice is happening, etc.?”

Dennis thought, but not for long, “Well, basically people just kind of nod their head and then go back to what they’re doing. They don’t seem very interested in the conversation.”

“Yah, and that kind of makes sense, doesn’t it? That sounds pretty consistent with who you’re being about this, doesn’t it?”

Dennis sat with that. “Can you say more? I’m not sure I understand.”

“Sure. So it sounds like you’re trying to bring something to people, but who you’re being about that is weak, timid, apologetic, they don’t really want this, it’s wrong that I’m sharing this, etc. Yes?”

“Right, and so from that place, we would expect people to react in a way that is consistent with that. Like, if someone comes to you and before they’ve said anything, they’re apologizing for wasting your time, and are being really timid and shy about what they’re bringing to you, how are you already getting set up to respond?”

Dennis thought for a while before responding. “Well, since it seems like they don’t think this thing has much value, I’m kind of getting ready to dismiss it. Like, of, they’re already apologizing for wasting my time, so this is probably going to be a waste of my time. So, how long do I have to wait until I can set this aside and get back to what matters?”

“Well geez, Jonathan. Of course they’re not really showing much interest. It’s like I’m signalling to them that they shouldn’t be. Is this another example of the kind of clearing I’m creating?”

“Sure. The clearing you’re creating is a function of who you’re being. So what you’re creating, at least as far as this is concerned, is ‘Hey, this isn’t something that worthwhile, and it’s an intrusion into your life, and you probably won’t want it’, etc. Not really very powerful, right? Understandable, certainly, because you’re nervous about bringing this forward and it matters to you — but not very powerful. Fair?”

Jonathan continued, “And look, we would expect you to get a little this way. Like, if that guy you mentioned was asking out a girl he was really smitten with, he’s going to have more significance about it, and probably be a little more frightened to do so, than if he was asking out someone he was only mildly interested in. The NO that he’s risking getting will just be less significant. Does that make sense?”

“Yah, it makes total sense. I’m really afraid they’re going to say NO, and then I’ll be unable to get them on board. And I think this thing really matters.”